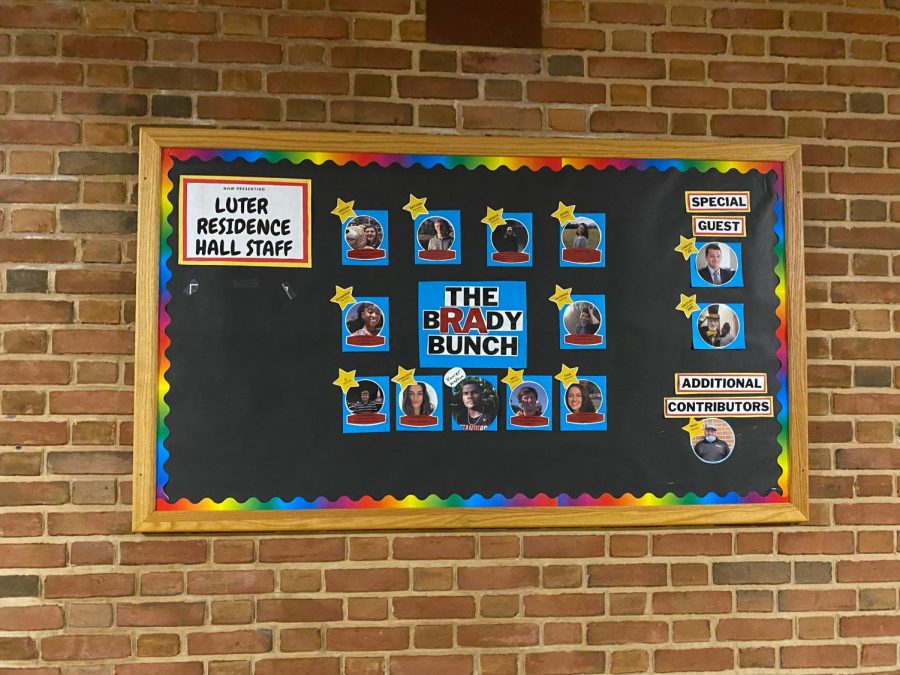 Despite efforts by the university to increase communication efforts, especially during COVID-19, some feel the new contract's flexibility clause runs directly counter to demands RAs made during a protest on Feb. 12.

When Wake Forest resident advisers (RAs) signed their contracts this year, there was a new clause that required them to take on extra responsibilities at a moment’s notice without increased pay.

“Due to the nature of the work, RAs may be asked to complete additional tasks and responsibilities that are not explicitly outlined in the RA Contract,” reads a copy of the 2021-2022 Resident Advisor (RA) Assistantship Contract obtained by the Old Gold & Black. “It is the responsibility of the RA to be flexible and adaptable and complete these tasks to the best of their abilities.”

The clause does not mention hazard pay.

The 2020-2021 contract, a copy of which was also obtained by the Old Gold & Black, also did not contain such a clause.

“It feels like a real undercutting move from the university in response to the pushback we had before,” Shade White, a senior RA, said. “A lot of the time, if RAs were asked to do something that we felt was too much, we could say that’s not in my contract. Effectively this clause will take that [ability] away. It removes that argument. Now Residence Life and Housing (RLH) is allowed to throw in any extra duties they see reasonable under that clause.”

Despite efforts by the university to increase communication to RAs, especially during the COVID-19 pandemic, the clause runs directly counter to demands RAs made during a protest on Feb. 12, according to White.

“The part of this that seems most disheartening to me is that it’s in response to what happened over February when RAs did not feel there was adequate communication in the responsibilities and duties that we were asked to fulfill,” continued White. “This clause opens the ability for these same kind of short-notice changes and expectations and there’s not going to be much RAs can do in response to it.”

Junior RA Malik McFarlane added that the timing of the addition seems suspect.

“I don’t know the reason, but they added a flexibility clause in the contract, which under normal circumstances would be fine,” McFarlane said. “But with the COVID-19 situation, it feels like a reactive addition.”

Briana Cresswell, assistant director of residence life, learning, leadership, and programming, said that the original copy of the 2021-2022 contract was reviewed on Nov. 24, 2020, and finalized on Dec. 7, 2020, a few months before the protest and spike in COVID-19 cases on campus.

“It was very far prior to the protest,” Cresswell said. “I want to emphasize that it had absolutely nothing to do with that, although adaptability is something we have learned from that.”

A junior RA, who asked to remain anonymous and will be referred to by the pseudonym Aspen, shares those concerns. Aspen requested this anonymity because they were afraid of retaliation from Residence Life and Housing.

“I was concerned because [the contract] was so vague. [RLH] dictated that they can change our job description and have us do anything that they want, and it felt like a direct result of the RA protest that was held earlier this year,” Aspen said. “By using our voices, we’re now being backed into a corner.”

According to many RAs, the clause seemed to open the door for an increase in responsibilities with RAs. That seeming increase, however, does not come with increased pay.

Another RA who wished to remain anonymous out of fear of retaliation from RLH agrees that the clause might bring extra work for RAs. For the sake of clarity, the RA will be referred to by the gender-neutral pseudonym Briar.

“During the ‘dark Orange’ period, they were asking us to deliver food or make sure that signage was up. That wasn’t in the contract,” Briar said. “In this new contract, we have this flexibility clause that says if [RLH] asks you to do something else, you have to do it. I don’t think it’s fair to include that clause without including either an increase in pay to account for the extra work or list exactly what those extra duties could be.”

However, Director of Residence Life Stephanie Carter said that the clause was not intended in a negative way.

“I do think it is worth noting that I don’t think anyone puts that in someone’s job description as a way to abuse them,” Carter said. “It is for those little random things that come up. We could have a ten-page job description to outline everything that happens and in the detail that people would probably want it. But who would want to read that? And that’s just overkill for an RA position. But there are things that pop up in all of our work that we have to address or deal with.”

Cresswell added that, despite concerns, the clause was not meant to create more work for RAs.

“This clause was not made as a way to add in extra duties,” Cresswell said. “This clause was all-encompassing of the core functions of the job already and other small tasks that we might not think of that could be outlined.”

“We’re already not fully compensated,” said Pilar Agudelo, a sophomore RA. “Let’s not pretend that our stipend is [above] minimum wage. If you’re a returner, it’s slightly higher but still minimum wage. It’s just placed in a stipend format, which makes it seem like it’s more than it is.”

Carter emphasized that those required 25 hours per week include sleeping hours and on-duty hours where RAs might be on standby rather than actively working. She also noted that RAs receive discounts on housing. They stay in single rooms for $1,160 per semester, compared to the normal rate of $5,837.

Assistant Vice President of Campus Life and Dean of Residence Life and Housing Matt Clifford added “The reduced housing rate is included in the student staff compensation as well.”

Students also received an additional stipend of $150 last semester. The bonus check was given to RAs after the Feb. 12 protest, but according to reporting from a previous Old Gold & Black story, that check was planned before the protest.

“We eventually got that $150 stipend, that one-time paycheck that they gave us,” Briar said. “We call it hush money because it’s like they got tired of us complaining about not getting any money for COVID-19.

Some RAs said that Wake Forest’s pay and benefits are far less than those of peer institutions like Duke University and the University of North Carolina.

“We were told, following the February incident there would be efforts to make our RA compensation reflect that of peer institutions because our pay is lower than places like Duke and UNC that are just down the road,” White said. “We also don’t receive any of the additional perks. Not only is income lower, but all of the stuff surrounding it is as well [for] things like parking or meal plans.”

As noted in an Old Gold & Black story from earlier this March, a group called the RA Concerns Action Group was formed to address complaints. The group, which is led by Vice President for Diversity and Inclusion José Villalba, has mostly been an information-gathering tool up to this point, according to Carter, who is a member of the group.

“While I appreciate the outside efforts in all that [Villalba’s] group is doing, we have yet to see what is going to fully come from that,” Carter said. “If they are able to push some things that we haven’t been able to, absolutely. Everything is still going to go to the betterment of our RAs and their position.”

Pilar Agudelo, who serves as the Diversity and Inclusion Committee co-chair in Student Government, hopes that the action group will have a lasting impact.

“I hope that something comes from the conversations with [Villalba],” Agudelo said. “As someone who consults with him on diversity and inclusion matters in Student Government as part of my committee, I think  from conversations I’ve had with him  that they are really committed to ensuring that RAs are not suffering from their job positions or having unnecessary challenges, and are getting the benefits they deserve.”

As the 2020-2021 school year comes to a close, many RAs have decided to stay in their positions. While some students stated they did so because they enjoy the work, others mentioned financial constraints as a major factor in their decision.

“I wouldn’t say [finances are my number one reason for staying], because if we weren’t getting paid in the first place, I’d still want to be an RA,” McFarlane said. “I really enjoy being in this position and in a way guiding freshmen to avoid decisions that I made or giving them a boost that I may not have had when I came to college. That’s my main reason for doing it.”

Though White also noted that he loves parts of his job, he says he felt tied to the job because of finances.

“There are really great parts of this job and parts that I love,” White said. “I don’t know that it’s always true that every RA returns because of a sound work environment. A lot of people are not representative of the socioeconomic status of other students, and they take [the position] because of the pay. I didn’t have much say in the matter of whether I would return because finances necessitated me to take the job.”

Aspen said that they like being an RA, but that they considered quitting because they were placed on South Campus as a senior for the 2021-2022 school year.

“I really like this job. I like interacting with the residents and helping people,” Aspen said. “It’s got a lot of benefits, but I wish the negatives weren’t as frequent as they are.”

Carter said that though working as an RA can be difficult, she believes it is a great way to get involved as a Wake Forest student.

“It is hard work, it’s intense work and we do our very best to show appreciation. Sometimes it falls flat, and I think we recognize that,” Carter said. “But it is still a great opportunity for folks to get involved on campus.”