The “Subway smell” has led to mass hysteria on campus, while also sparking a heated debate 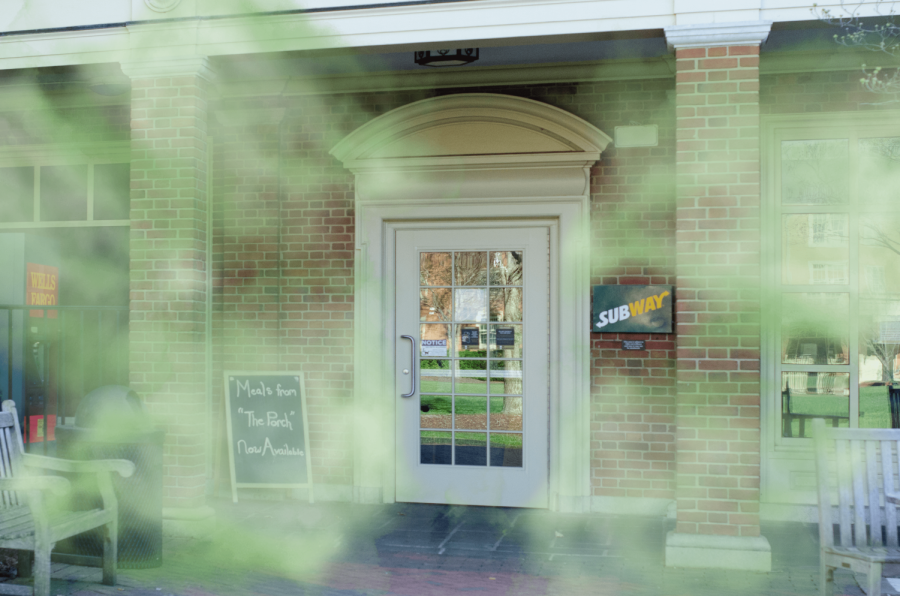 At 3 a.m. on April 1, a group of 26 freshman girls reported smelling the indescribable, but ever-recognizable aroma of Subway while returning to Babcock Residence Hall. This comes following numerous reports of the smell infiltrating Wait Chapel and Efird Residence Hall last week.

Four of the girls immediately proceeded to vomit in the nearby bushes while one reportedly broke into an all-out sprint and would not listen to the calls of her friends beckoning her to come back.

“Yeah, haha, like, we were coming back from uh, um, bowling when Stacy said it smelled like Subway,” freshman Emily “Em” Paramount said. “Katie said, ‘shut up Stacy, that’s probably just Ian from Sig Pi still on you!’ but now I think it actually might have been Subway. ”

Stacy requested an interview, but she smells so intensely of Subway asiago bread that the OGB reporting team was unable to approach her without becoming queasy.

When the upper quad was overtaken by the Subway stench this past weekend, Wake Forest administrators and campus police hurried to create a “quarantine” zone to contain the spread of the pungent odor. However, in a move communication majors are calling “really not good,” the physical quarantine barrier was improperly placed on Long Road, cutting off University Parkway from Ewing and the compound. New friends of fraternities have expressed their particular frustration with the school’s blunder.

“Bro, it sucks!” said new friend of Pi Kappa Alpha fraternity freshman Ty Neelegs. “Now I have to do that dumb u-turn when I’m driving brothers who live on Ewing back from Campus Gas.”

Students living in Davis, Kitchin, Taylor and Poteat Residence Halls have also reported sickness, social exile and excruciatingly vivid dreams due to the infestation of the aroma.

“It’s really hard. My brothers don’t speak to me, girls avoid me and my dad refuses to acknowledge my accomplishments,” said sophomore and new Lambda friend Constance Pated. “Oh wait, are we talking about, like, recently?”

The inherent mysteriousness and unpredictable nature of the smell’s conquest have continued to cause hysteria within the undergraduate population. Due to the chaos, freshmen have decided that it might be a good idea to start wearing masks over their noses and following “social distancing” rules.

“It doesn’t even matter if you get a six-inch meatball parm on Italian herb and cheese bread or a footlong buffalo chicken on a flatbread,” sobbed freshman Henry Jaso. “It still smells the same!”

In a response to the community outcry that has raised more question than answers, Subway released the following press statement:

“Your 2 a.m. drunk personas have taken us for granted. You will recognize our influence.”

As President Hatch’s time at the helm of Wake Forest comes to an end, this invasion of aromas has caused a particular strain on the transition committee. In a recent move students are calling “weird” and “totally unnecessary,” President Hatch has sent out 42 comfort emails and has chained himself to a Benson column in an act of solidarity aimed to bolster student morale about the situation.

“There is no need to panic! We still have Benson,” President Hatch screamed. “Moe’s gang for life!”

Hatch was forced to conclude his protest for “personal reasons” four minutes after eating Moe’s for lunch.

While administration, campus police and the student body are doing everything they can in order to slow the spread of the Subway smell, a small sub-group of students, calling themselves The Children of Subway have been outspoken in their support of the aroma and what it represents.

“I just like it,” said founder of The Children of Subway Richard Stank. “My favorite sandwich is the buffalo chicken with spinach, olives, mustard and mayo.”

Although the group started as a viable social option for lonely, loser weirdo students, it has morphed into an organization consisting of over 200 undergraduates, with the majority of its followers coming from fraternities and sororities.

One of the members of the organization, Ana Lewis, is a senior who has yet to secure a job post-graduation.

“[The smell] reminds me of a simpler time,” Lewis said. “Every weekend freshman year my friends and I would pack into that Subway after a night of going out and just enjoy each other’s company. I wish people could recognize that we are fighting for our history, for unity, for America.”

Hatch has stated that, given the chance, he would choose to demolish the Subway. However, health officials have deemed the sandwich shop “too dangerous to approach” and the university president is unable to get within 300 yards of the building.

“I wish things could go back to normal,” Hatch said. “But that’s just not how this is going to go. If I need to, I will finish this myself.”

Hatch was last seen heading to Subway carrying two dead rats he bought off a freshman living in Bostwick basement. Subway’s monthly health inspection is set to be conducted on April 2.