As students wonder about the value of discussion groups, the university offers a solution 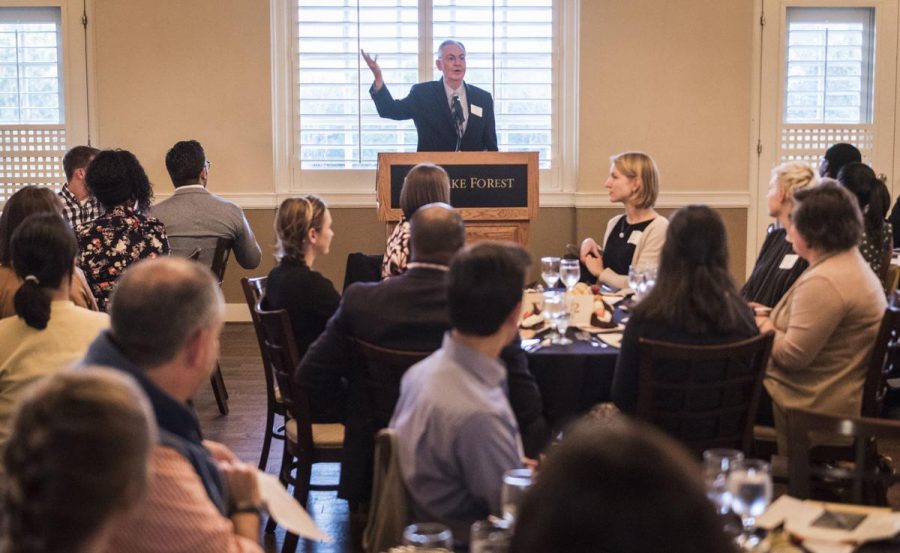 Discussion groups, including the “Calls to Conversation” initiative, have been a core tenet of the university’s response to social issues raised by students on campus. Some, though, feel that Wake Forest’s discussion group model — which aims to address these controversies — is all talk and no action.

In light of these new concerns among students, administrators announced the formation of the Commission on Evaluating Discussion Groups. The group will feature prominent professors on oration and communication, as well as two students, who will be selected when President Hatch himself throws a dart at a 5,000-slot rotating board.

“We feel that it is really important to include student voices in our decision making,” said an administrator familiar with plans for the group, but who was slightly muffled by the sounds of students trying to talk with them. “And we really feel the best way to do that is to have the students shout over administrators and professors. That way we can hear them loudly and clearly.”

According to the aforementioned administrator, concerns about discussion groups being ineffective began circulating a few weeks ago.

“We literally have been saying this for years,” said the student in the office that had been trying to speak for a good 20 minutes. “The university cannot expect to continue sweeping important issues like the experience of marginalized groups on campus under the rug of discussion groups.”

Vice President for Donor Engagement A. C. Tanonverba, who serves on the committee, disagrees with that assessment.

“I think it’s important to get every side of the story, and discussion groups are a key way to do that,” Tanonverba said. “After all, if we don’t know about what’s going on here, we can’t continue to ignore — I mean address — critical issues facing students.”

The discussion group will face critical challenges, however, especially as student anger boils over. One senior, who asked to remain anonymous and will be referred to as Briar, said that they and their friends do not trust the discussion group.

“They want to have these groups to look pretty and caring for admissions,” Briar said. “The reality is that the university is not interested in substantially looking into its problematic present, for all its talk about atoning for injustices in the past.”

Administrators, however, argue that there is not much that can be done about the actions of the school population.

“Unfortunately, there is a lot about the campus experience that we just cannot manage,” said Vice President for Explaining Difficult Things to the Press John Newman. “A lot of what happens is either not recorded or off-campus. We cannot enforce rules regarding conduct in this manner as effectively as we would like.”

The committee will meet first on April 1 for a pro forma session and will begin work sometime between now and before the end of the semester. Maybe.

“We aren’t too focused on a start date,” Tanonverba said. “This work is too important to attach concrete things like dates to.”