Demon Deacon soccer secure’s yet another come back victory 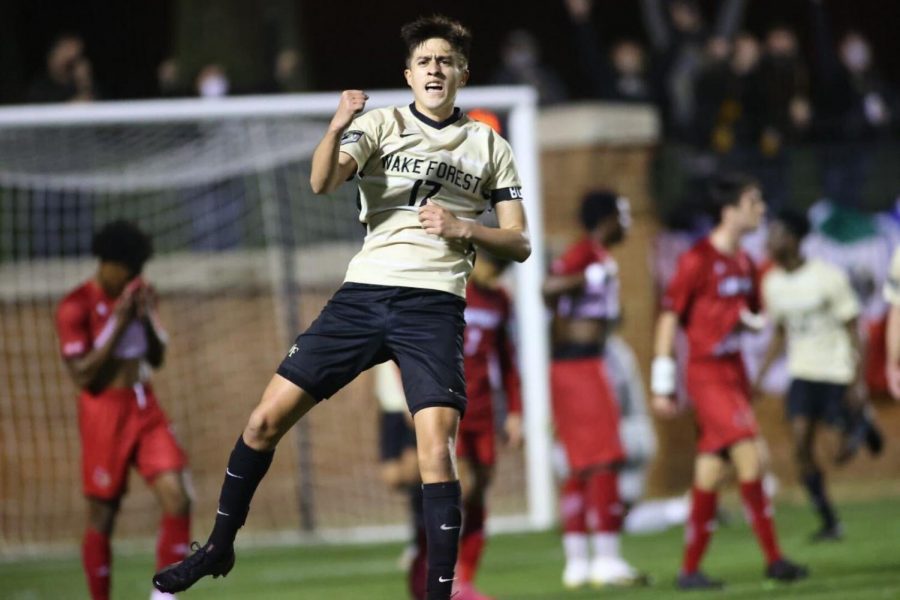 It’s become evident that Wake Forest men’s soccer (11-2-1, 3-0-1 ACC) likes to come from behind to win. They have now accomplished this feat against Boston College, Notre Dame and, most recently, the University of Louisville.

The Demon Deacons defeated the Louisville Cardinals this past Thursday at Spry Stadium despite giving up a goal within the first ten minutes of the first half and being down for a significant portion of the game. The Deacs were able to pull off a victory in overtime thanks to a pair of goals by sophomore Omar Hernandez.

“I thought the second half we played much better,” Head Coach Bobby Muuss said. “Obviously, we found a way to win.”

The Cardinals may have been the first to strike, but Wake Forest was the dominant team for much of the latter portion of the game. The Deacs weren’t able to get a goal in the first half, despite an on-goal header by sophomore Nico Benalcazar in the 43rd minute. The first half ended with Louisville outshooting Wake Forest 8-7 (Louisville also led 4-3 in terms of shots on goal).

The Deacs looked threatening to start the second half. Freshman Hosei Kijima had a dangerous long-range shot in the 47th minute that the Cardinal goalkeeper had to parry over the bar.

In the 55th minute, Hernandez took a 20-yard free kick that curled over the wall and into the top right corner of the goal. Wake Forest fans celebrated the 1-1 scoreline with new-found hope of yet another potential come-from-behind win.

“We were down at the beginning,” Hernandez said after the game, “We needed something to motivate us, so just scoring that first goal was a little piece of motivation. It just helped all of us.”

The situation looked even better for the Deacs after a Louisville defender was sent off the field with a red card. Now, with the Cardinals down a man, Wake Forest turned up their game a notch, outshooting their opponents 5-1.

Regulation ended, however, and the score remained 1-1. The game was sent to overtime, but it would not last long. Two minutes in, Hernandez drew a penalty in the box. The crowd watched eagerly as he stepped up to take the penalty kick.

The keeper guessed the wrong direction as Hernandez sent the ball into the left side of the net to secure another Demon Deacon victory.

“I felt the energy a lot [after the penalty kick],” Hernandez said. “I love the fans here. They give us a bunch of energy. Even when we’re down, they’re still motivating us, still pushing us.”

This was Muuss’ 100th win at Wake Forest, which made the victory extra special.

This Friday, the team will take on Clemson away from home; the last two games against the Tigers were split, with both games being won by the home team.

When asked what lessons the team will take from Louisville as they head into Clemson, Muuss said, “We have to play our game. Louisville did a great job of imposing their style on us, and [setting] their tempo in the game.”

Muuss looks to get win No. 101 against a Clemson team that Wake Forest hasn’t played since October.