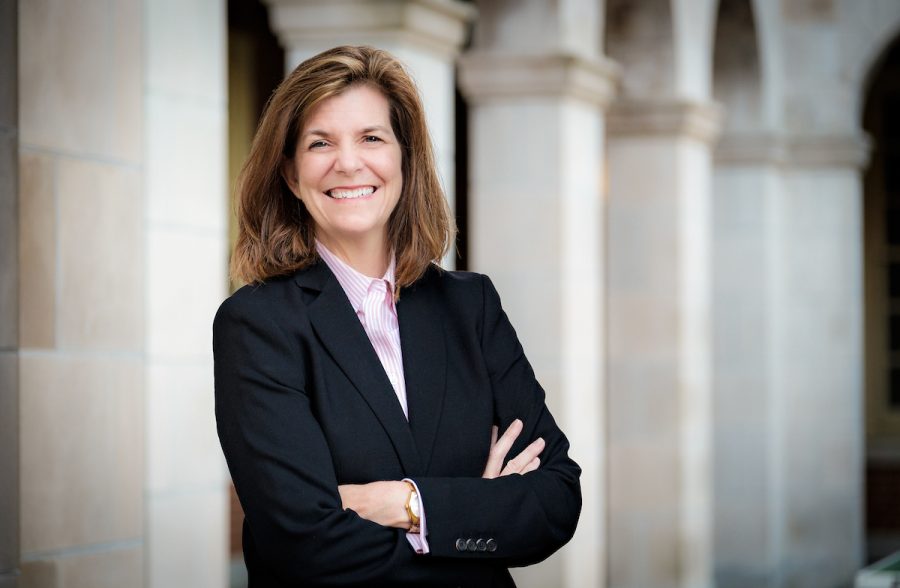 Michelle Gilespie is Dean of the Undergraduate College, a position she has held since 2015. Before becoming the dean, she taught history at Agnes Scott College and Wake Forest University and published research on historical systems of race, gender and class in the Southern United States. Her upcoming research is focused around two influential women in the South, one of whom has a special connection to Wake Forest. Gillespie earned her Ph.D. in History from Princeton University.

I’ve been at Wake Forest since 1999, but this was not the first academic position I held after I got my Ph.D. I taught at Agnes Scott College, a small women’s college in Atlanta. I’m a women’s historian and a feminist, so I was really happy to be teaching at a women’s college for the first part of my career. I was drawn to Wake Forest, though, because it had such a strong academic reputation, history department and undergraduate liberal arts program. I was also excited that Wake Forest had professional schools because I thought that it would create a kind of intellectual energy and connectedness to the world, and that really intrigued me. So even though I wasn’t looking for a new job at the time, I was encouraged to apply.

I would say what I enjoy the most is being able to support faculty — to give faculty the resources, time and opportunities they need to be teacher-scholars and to engage their students in what I call the engaged liberal arts. Engaged liberal arts means inviting our students to think about the world and the diversity of the human experience in new ways. Any way I can support faculty in doing that gives me enormous pleasure.

Also, I enjoy supporting students, whether it be through the curricular innovations we bring, new academic programs, really good advising or great resources to do academic research and community engagement. That is a huge source of pleasure for me as well. I have a Dean’s Student Advisory Panel that meets once a month, and the students tell me about their experience: what they’re learning in the classrooms, what campus life is like and what’s working well or not so well. I love listening to our students and thinking about the ways that we can better support their learning.

A final thing I love to do is help in the process of hiring new faculty doing really exciting research. Today, actually, I just heard from a wonderful scholar in Black feminist thought who’s going to be joining our Women’s, Gender and Sexuality Studies faculty this fall. That’s another part of my job that I really, really enjoy.

Could you talk to me about your past research?

When I was an undergraduate at Rice University, I had a work-study job at the Journal of Southern History. In that position, I looked at how historians were examining the Southern past, particularly around the history of African Americans and civil rights. I thought that was such important work and that it was not only a Southern problem, but a national problem as well.

That motivated me to get a Ph.D. in history, and my early work looked at the relationship between class and race in this pre-civil war South.

I also have always been passionate about gender and women’s history, so my work has moved in that direction. I’ve co-edited two volumes of North Carolina women’s history where we shared biographies of Black, white and Native American women, focusing on the ways that they had agency and their impact on North Carolina history. That’s been fun because I’ve been able to go out to different groups to talk about these women and help the larger public understand how complex our past is and how limited their lenses about history have been. I try to use stories about interesting people to help a broader audience understand a more complicated society and how it was shaped by segregation and racism.

What does your upcoming research focus on?

I have two projects. I have a contract for a small book that’s going to be about a Creek woman in Georgia and her political and cultural power in the 18th century: how she got it, and how it went away. I’m going to use this woman — her name is Mary Musgrove — as a way to help frame the history of early Georgia, the creation of the institution of slavery there as well as hierarchies of class and gender.

The other project is a biography of Libby Holman. Holman was a torch singer who married Z. Smith Reynolds of Z. Smith Reynolds Library. They had a very short marriage, and when he died under very mysterious circumstances, Holman was accused of killing him. People know the story of Smith Reynolds’s death, but Holman went on to live an amazing life. She sang with the most famous Black jazz guitarist in America in the 1940s, Josh White, and they were one of the first Black and white duos. As they sang around the country, she experienced segregation through her experiences with White. Seeing racism so overtly had a huge impact on her. Also, she and her son — a son she got pregnant with just before Smith Reynolds died — inherited a portion of Smith’s estate. With that money, she created a foundation that eventually paid for Martin Luther King, Jr. to go to India in 1959 and study passive resistance.

Holman is just a fascinating woman because she seems to be just a step ahead of progressive cultural change, but I also think she appropriated Black culture as a singer and musician without even recognizing what she was doing. She’s just so much more than the woman who some believe may have killed Smith Reynolds.

How does your past scholarship influence your work as dean of the undergraduate college?

I think that it plays out in terms of the values that we embrace in the Dean’s office and with all of our faculty colleagues. This can be seen through our commitment to inclusive excellence and our creation of diversity action plans for the departments, which help create more inclusive curriculums and greater attentiveness to what inclusion means in the classroom.

I’m also always trying to think about equity issues. Are women getting endowed chairs as often as men are? Are there any race differentials in terms of tenure and promotion? Are we making sure that we’re paying attention to equity issues with respect to our faculty of color? I think that’s another way that my scholarship and teaching play out in what I want to prioritize as dean of the college.