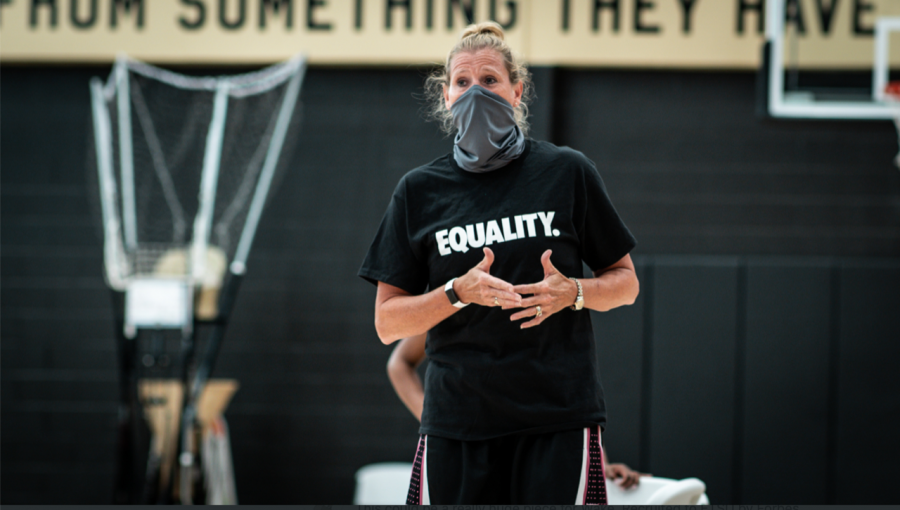 After the insurrection at the Capitol on Jan. 6, the Wake Forest women's basketball team felt that they had to take some kind of action. At their next game, they knelt for the national anthem.

It had been over two weeks since the Wake Forest women’s basketball team had played a game, but on Jan. 7, they were finally back on the court. But, the world was different than it had been the day of their last contest on Dec. 22. When the lights shined on the American flag, and all in attendance stood for the national anthem, the team did something they hadn’t done before. Together, they linked arms and knelt.

Jan. 7 was the day after the Capitol insurrection in Washington, D.C., and the team felt that a stance needed to be taken after such a traumatic day for their country. According to a player on the team who chose to remain anonymous, the team was shaken by what had occurred the previous afternoon in the nation’s capital. The player will be referred to as “Player X” throughout the article.

“That really hit our team,” Player X said. “Obviously, it had to be addressed.”

The first person to address the insurrection was Head Coach Jen Hoover. The team knew that Hoover would make a statement. That’s the type of coach she is. At the end of practice, Hoover spoke to the team.

“It’s easy to address this as what it is: an issue. It’s embarrassing for our country,” she said. “If you want to kneel for the national anthem tonight, you are welcome to. We are with you.”

Throughout the past year, the Wake Forest Athletic Department has supported their athletes using their voices to enact change. The department developed a campaign titled “Together We Stand,” which encouraged students and athletes to protest in the ways they saw fit. The men’s soccer team, for example, wore Breonna Taylor’s name on their jerseys when playing in Louisville, the city where she was killed. The men’s basketball team marched together in Winston-Salem during a Black Lives Matter protest. Many teams also chose to kneel for the anthem.

“[The Athletic Department] was 100% with us. I am very grateful for it,” Player X said. “[The department’s] basis for the entire thing … was ‘we support you, we want to be here for you and help in any way we can.’”

For over a month, the team’s protest, in their eyes, moved along without issue. There was no response on campus at Wake Forest at all. Due to a no-attendance policy because of COVID-19 regulations, most students were not aware of the protest at all. The team also hadn’t heard of any backlash from the community. That all changed on Feb. 28, when, amid their toughest stretch of the season, Hoover opened up to the team about what had actually been happening since January.

Ever since the team began kneeling, Hoover had received hate mail regarding her and her team’s actions. For a while, Hoover kept that information to herself, but eventually, she felt she had to tell her team the truth. Along with the hate mail, Hoover had also been hearing complaints from the team’s donors. One of the donors, who personally funded the team’s recent trip to Europe, reportedly told Hoover that if the protest went on, future trips abroad would disappear. It is currently unclear if the donor stopped financing the program. According to Player X, this reaction led the team to cease their kneeling before the ACC Tournament. No other member of the women’s basketball team was available for comment on the subject.

This is not the first instance of donors at Wake Forest threatening to end their funding as a reaction to social justice movements. In the fall, members of the football team wore “Black Lives Matter” stickers on their helmets throughout the season. Boosters of the program reportedly indicated they would no longer financially support the team, but it is unclear whether they ended their sponsorship. The Wake Forest Athletic Department did not comment on the rumors during the season.

This type of reaction to social justice movements from college teams spans far beyond Wake Forest.

At the University of Texas, football players elected to leave the field before the playing of “The Eyes of Texas,” a school song typically played after each game. The song, which has a racist history, is played to the tune of “I’ve been working on the railroad.” In response to the protest, high-level donors promised to pull their funding. But, unlike the case at Wake Forest, they went even further. Some donors also went as far as to call out the Black population of the school and the football team. In an email to the school obtained by The Texas Tribune a 1970 graduate said, “Less than 6% of our current student body is Black. The tail cannot be allowed to wag the dog … and the dog must instead stand up for what is right. Nothing forces those students to attend UT Austin. Encourage them to select an alternate school … NOW!”

After a review of the situation, the school determined the song is not “overtly racist.” At his introductory press conference, newly hired Head Coach Steve Sarkisian told reporters, “We’re going to sing that song, [and] we’re going to sing it proudly.”

The actions from the University of Texas donors, and those from Wake Forest, come across as a way to prevent the athletes from speaking their minds. Player X believes the reaction from Wake Forest donors is purely based on an opposition to change.

“I believe it’s [the donors’] attempt to limit student athletes’ ability to change people’s viewpoint on things they may not agree with,” she said. “There are fans at Wake Forest that want to look at the school and have it look the same way [it always has].”

Despite the reaction from donors and fans, Player X believes this was an important statement for the team to make.

Asked if, in hindsight, she would protest again, Player X said, “Absolutely. I wouldn’t change it for the world. We made an impact that is going to outweigh any negative response. If you’re going to support us, support us.”