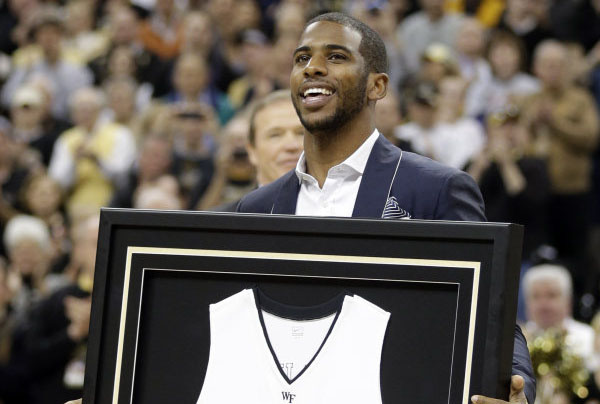 In celebration of 100 years of the Old Gold & Black and a century of reporting on Wake Forest basketball, there is no better individual to honor than legendary point guard Chris Paul.

Paul was destined to be a Demon Deacon, growing up as a child just miles away from the Reynolda Campus at Wake Forest University.

He continues to represent everything that Wake Forest stands for, and is carrying on the legacy of Tim Duncan as a great Wake Forest alum in the NBA.

On Wednesday, December 30, 2015, OGB staff writer Kirby McMullen had the opportunity to interview Chris Paul after the Clippers played the Hornets in Charlotte, N.C. The following is the conversation he had with him.

Q: How did Wake Forest prepare you for your NBA career?

A: Man, I was talking about that earlier. Wake prepared me with time management and responsibility. When I was at school, I was a true student-athlete. When you go to Wake, you’re not just going for athletics. It’s a tough academic school, so it just prepared me to work hard.

Q: How special was it to play Division I basketball in your hometown?

A: It was very special. I couldn’t imagine going anywhere else. My family got a chance to see me play each day. It was close. Wake Forest, a lot of people don’t know, is a private school, so it’s a select few people who get a chance to go there.

Q: What was your single greatest Wake Forest memory?

A: That’s a tough one. It felt pretty good, my first ACC game, winning at Carolina. I’m not really sure. I think pre-season conditioning is one of those things that prepared me for life. It was some of the hardest stuff I ever did in my life, so some of my greatest experiences were probably with my teammates and coach Prosser.

After Graduating from West Forsyth High School in 2003, and being awarded AP North Carolina High School Player of the Year, Paul traveled a mere 10 miles to begin his career here at Wake Forest.

Ranked as the No. 9 high school prospect, Paul made an immediate impact on the late Skip Prosser’s 2003-04 team. Paul started all 31 games of the 2003-04 season and was awarded ACC Rookie of the Year and National Freshman of the Year by multiple organizations.

During his rookie season, Paul managed to break five Wake Forest freshman records and tally many other accolades.

He set a standard for Wake Forest point guards that has yet to be matched.

Since leaving Wake Forest after the 2004-05 season, Paul has been a dominating force in the National Basketball Association.

He has become one of the most popular players in the league, a nine-time NBA all-star and is the lead actor in an extremely prominent advertising campaign with State Farm Insurance.

The Old Gold &Black has been extremely privileged to cover Paul from the day he committed to Wake Forest to the day he received his ninth-straight invitation to the NBA all-star game, just a few days ago.

From the days of his heroic 18-point, eight-assist and five-steal performance to lead the Deacs over No. 4 North Carolina in overtime, on the road, to his selection as a consensus first-team All-American in 2005, the Old Gold &Black has been there for all of these moments and for an innumerable amount of moments in between and into his professional career.

Every day Paul makes Wake Forest University proud, and we, the Old Gold & Black, are proud to have had the opportunity to cover his achievements over the years.