Tigers cause Deacon second half collapse 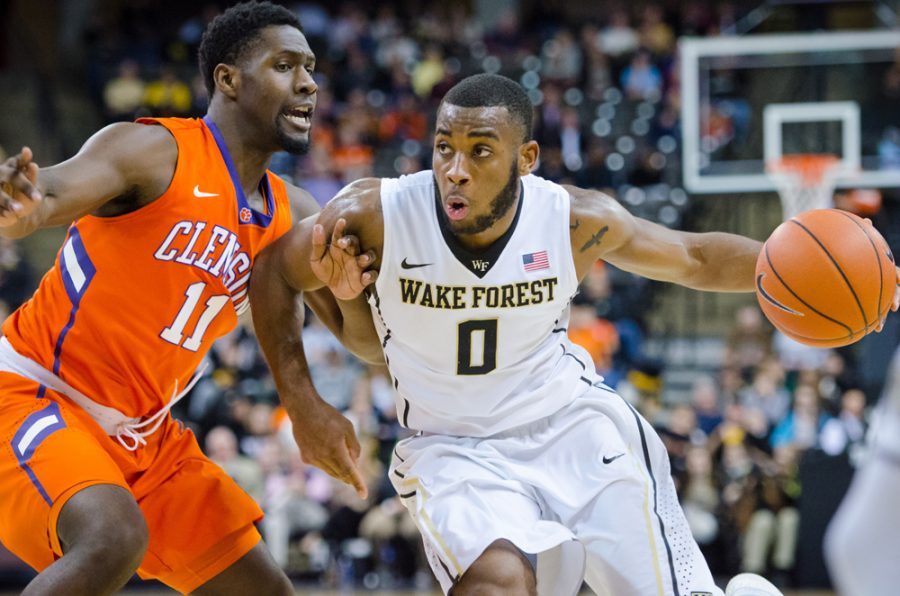 There is a delicate balance between fans and athletes at the collegiate level.

Often times the students of a university can will a team to victory with their energy and attitude during home games.

At the same time, an apathetic fan base can lead to a team that quits on their supporters and themselves.

I did not grow up a fan of Wake Forest basketball. I did not experience the thrill of a number one ranking, of Chris Paul leading the team to monumental victories in the Joel nor any of Skip Prosser’s famed tenure as head coach of the Demon Deacons. As the son of two Maryland alumni, my only exposure to the glory days of Wake Forest basketball was when I would root vehemently against them twice every year as a kid.

So it is fair to acknowledge that I do not fully understand the dynamic of someone who has been a Wake Forest fan their entire life; however, as someone who has now fully committed themselves to being a Wake Forest fan I have seen an incredible amount of apathy, disinterest and even pure ignorance when it comes to the athletics at this esteemed university over the past two years.

However, what occurred on Tuesday night against the Clemson Tigers was a new low for a Wake Forest sporting event.

Everything about the game, whether it was the students, fans or actual team on the court was unbelievably disappointing. From the opening tip-off there was absolutely no energy in the building. It was silent, serene and still.

The few students who did manage to make the trek from campus seemed more interested in eating the free bacon that was handed out upon entrance than paying any attention to the actual game that was taking place. The atmosphere at the Joel on Tuesday night felt much more like a funeral wake than a Wake Forest basketball game.

It is understandable — to some degree — that attendance will dip when a team is struggling or not playing against a very competitive team; however, there is never an excuse for complete apathy.

A young, unexperienced team can often look to feed off of the energy of the home crowd. Having a home court advantage is one of the most important things that we, as students, can do to do support and contribute to Wake Forest athletics.

As for the actual game on Tuesday night, Wake Forest started off sluggishly, finding themselves facing a nine point deficit only three minutes into the game.

The Deacs managed to claw themselves back into the game and eventually took a 28-20 lead into the locker room at halftime. The first half of the game was extremely sloppy offensively for both teams, but the Deacs played great defense, holding Clemson to their lowest scoring half of the season. Fueled by the aforementioned disinterest of the students in attendance, the Deacs did not come out ready to play in the second half.

After playing so well defensively early in the game, the Deacs immediately gave up an 11 to zero run to begin the second half. The Deacs were never able to respond, and ended up allowing Clemson to score the most points they had in a half all season — 56. It was hard to watch the second half of this game and not think that the team was quitting on themselves. The energy and effort from the Deacs was clearly not their maximum. Because of this, it was painful to watch. The Deacs appeared to be defeated as soon as Clemson began to push back, and the crowd was so uninterested in the game that they didn’t even seem to notice that Wake Forest was no longer winning the game.

The last few weeks have been excruciating for fans of Wake Forest basketball, and I cannot imagine what it feels like to be on the team currently. The Deacs have played the toughest schedule in America and it appears as if it has really worn them out. They fought valiantly in the early part of the season, getting many quality wins; however, after so many close losses, it is not surprising that the team is struggling to stay focused.

The schedule gets easier in February, but if Wake Forest does not win a game soon, the 2015-2016 season may be looked at as a step back from last year. This free fall needs to end — seniors Devin Thomas and Codi Miller-McIntyre deserve to go out on a better note than this and the students of Wake Forest University need to show up to the Joel, and at the least, give these two players the proper finale they deserve.