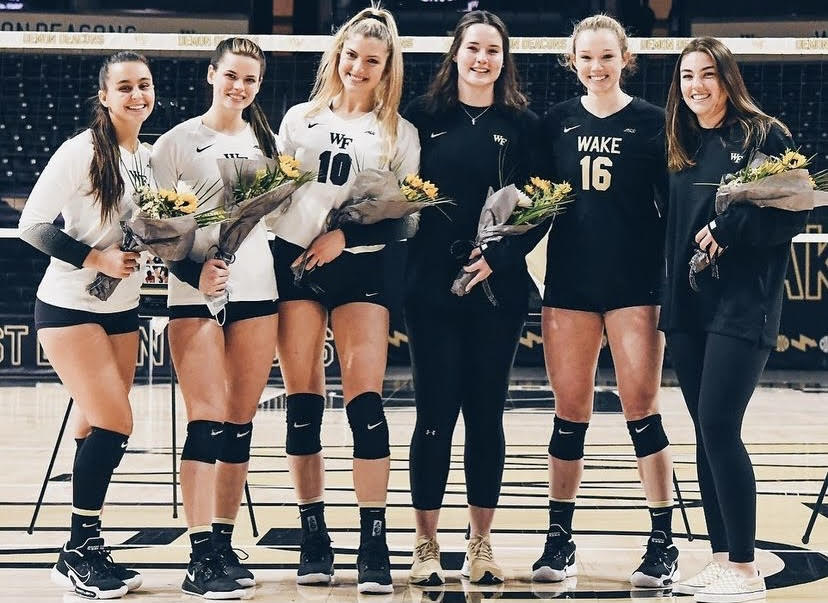 Wake Forest and Boston College took to the court at the Lawrence Joel Veteran’s Memorial Coliseum on Friday, April 2, and played a close match replete with ups and downs for both teams. Although the Deacs played well, the Wake Forest volleyball team fell short, finishing their season with a record of 1-15.

But this night was special, nonetheless, as senior Wake Forest volleyball players Madeline Holt, Caroline Kuhn, Alysia Nielson and Paige Sebesta finished their athletic careers; and I am lucky enough to say that I was able to play with these amazing women in one last match. Following the game, each of the seniors was honored for their incredibly hard work over their past four years at Wake Forest.

Maddie Holt, a setter out of Bloomington, Ill., finished her career with an impressive 2,976 assists and was a key player for the team throughout her career. After suffering a broken hand during her junior season, she came back during her senior season as the starting setter for the Deacs.

Holt’s time playing for the Demon Deacons was nothing short of amazing.

When asked what she has taken away from her journey, Holt responded: “Wake volleyball has been such an amazing experience, and senior night was the perfect ending with all of my friends and family.”

Maddie Holt will graduate in May with a Bachelor’s in Communication.

Caroline Kuhn, an outside hitter from Greenville, N.C., tallied 744 kills during her time at Wake Forest and was a consistent force for the Demon Deacons. With both of her parents previously attending Wake Forest, Caroline found Wake Forest to be the perfect home for her collegiate career, too.

Following Friday’s match against Boston College, Kuhn said, “If I could say one thing to everyone going forward, I would thank them for making this the hardest goodbye I have ever had to say.”

Caroline Kuhn will graduate in May with a Degree in Business and Enterprise Management.

Alysia Nielson, a defensive specialist reigning from Las Vegas, Nev., posted 200 digs and 17 service aces during the course of her time at Wake Forest. After redshirting her freshman year, Alysia played in 26 matches during her redshirt freshman season in 2018. Nielson was a consistent player on the court, and made a positive impact on everyone that she came into contact with. Alysia Nielson will graduate in May with a Bachelors’s in Business and Enterprise Management. She plans to continue to pursue higher education.

Paige Sebesta, senior captain and libero from Cypress, Texas, racked up 356 digs in her career at Wake Forest. During Sebesta’s junior season at Wake Forest, she made the difficult transition from an outside hitter to a libero, and showed nothing but incredible talent.

When asked about her time at Wake Forest, Sebesta said, “It was a bittersweet ending to my volleyball career. On one hand, we lost a heartbreaking match and I knew I would never play again. On the other hand, I know that the future of this program is incredibly bright, and I wish I could be around to experience it.”

Sebesta will graduate in May with a degree in finance.

The Wake Forest volleyball program is thankful for all of their seniors, and has some amazing players returning for the 2021 fall season. Ashley Slater, a freshman outside hitter, named to the ACC All-Freshman Team will be returning in the fall to continue her career. Additionally, sophomores Zoe Gonzales (77 blocks) and Peyton Suess (435 kills) plan to return this coming fall to bolster the front row for the Deacs and propel the program towards a winning season.

Wake Forest volleyball has a bright future, and the Deacs will continue to improve each season. Although the seniors have made their departure, they are leaving the program in good hands, as Abigail Krueger and Peyton Washington will return as senior leaders.

As Paige Sebesta, Wake Forest volleyball alumna, said, “I cannot wait to watch this program fight its way to the top.”