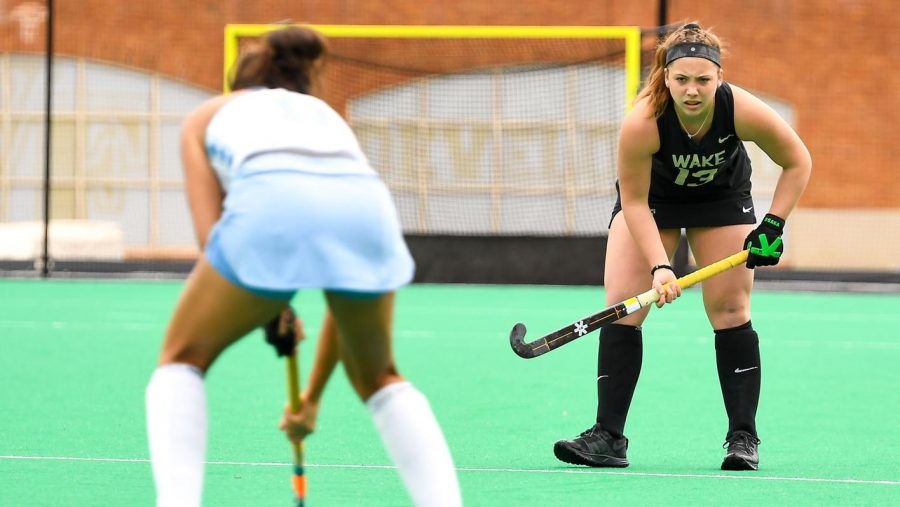 Maxwell has scored four goals this season, two against Boston College, one against Duke and one in Wake Forest’s most recent game against the University of Virginia.

Hannah Maxwell is a freshman forward from Forty Fort, Pa. In Spring 2020, Maxwell decided to graduate from high school early in order to train with the field hockey team at Wake Forest. However, she was unable to get in the true “grey shirt” experience due to the COVID-19 pandemic hitting the nation.

Delaney McSweeney: The first time you arrived at Wake Forest was when you grey-shirted last spring, right before COVID-19 broke out across the nation. Since you came a semester early, how did the lockdown affect the training that you were expecting to get by graduating from high school early?

Hannah Maxwell: Obviously, one of the main reasons that I chose to grey shirt was to get acclimated to both athletics and academics here at Wake before jumping straight into the season in the fall. However, as you mentioned, COVID sadly cut that time short — though I do not regret my decision one bit. Within just a few short weeks here, I was able to get a feel for the school and what life as a student-athlete is like here at Wake. Once we got sent home, we constantly had Zoom meetings and even leadership council meetings which I was able to be a part of. So, even though I was not able to be here at Wake, I was able to gain a ton of experience off the field which I think ultimately helped me to grow.

DM: To follow up on that, how have you grown and improved as a field hockey player since coming to Wake Forest last January?

HM: I have definitely seen improvements in my skills and game awareness, but I would have to say that I have grown the most just as a person. I’ve been able to make so many connections with my teammates, and I am constantly trying to learn how to better myself as a leader, both on and off the field.

DM: Looking back at your younger years, what got you into playing field hockey, and who most

inspired you to begin playing and continue into college?

HM: I first started playing field hockey when I was about seven years old, and I instantly fell in love with the game. No one really inspired me to play hockey, however, the area I come from is a hotbed for field hockey. As my field hockey career progressed, I realized my potential to play at the next level in both college and for the U.S. National Team.

DM: Given the pandemic and its circumstances, how has your season been? To my understanding, the spring season is usually more laid back — has this year been different?

HM: As you mentioned, our regular season is usually played in the fall with our spring season being a time to get in better shape and work on tactical skills. However, with COVID-19 we had to make some adjustments. The ACC was the only conference that allowed field hockey to compete against other teams in the fall, which was incredible because we got a ton of experience playing against the best of the best. Personally, the fall season became a time for me to learn what playing at the Division 1 level was like. At first, it was difficult, but many teaching moments came from these games which ultimately helped me this spring.

DM: Do you have any pre-game rituals that help to prepare you for a match?

HM: I don’t have anything in particular that I do, but I always try to be the hype woman. Before games, you can usually find me dancing in the locker room or sending motivational quotes in our team’s group message. I try to get the team focused and ready to compete.

DM: What made you decide to come to Wake Forest, as I am sure that you had many other options on the table?

HM: I looked at many other schools, but the family culture and Coach Averill kept bringing me back to Wake Forest. When I first visited Wake Forest, I came unexpectedly and stopped by Coach Averill’s office with my family to see if she was available to speak with us. She took time out of her busy day to talk to a recruit she didn’t even know existed, and we ended up chatting for two hours. I’ll never forget that day because 1) it was my first visit to a big school and 2) Coach Averill’s willingness to find time to speak with us went a long way. After my visits to other universities, I kept coming back to Wake Forest and that moment with Coach Averill. I respected her honesty and determination, and knew she was who I wanted to play for. I knew that I wanted to play D-1 field hockey at a smaller school, and Wake felt like the perfect fit for me.

DM: Coming into your freshman year, would you have expected to ever be an ACC Offensive Player of the Week, not to mention that you earned the award twice? How has this changed your outlook on your athletic career moving forward?

HM: To be honest with you, I hold myself to pretty high standards, but winning this award never really crossed my mind. I really have just been focusing on our team culture and trying to win games this season. Wake hockey is having so much fun this spring on the field, and to come away with awards like Offensive Player of the Week after coming off big wins is just something that adds to the fun of it. None of these accolades would be possible without my teammates and their endless support. Personal awards are always nice to win, but nothing will compare to winning championships with my teammates for this university.

DM: How has it been stepping into a leadership role during your freshman season?

HM: Being a leader comes with many responsibilities. I have attended various leadership meetings within the team and among other student-athletes at Wake. This has been an ongoing learning process for me, and with the help of these meetings and having great teammates, it has made it a much smoother process. I hope that my teammates look to me as a leader and know that I would sacrifice anything for the good of this team.

DM: What parts of your game do you plan on improving as you move forward into your coming seasons with the team?

HM: I’m very excited to see what the future holds for me as a Demon Deacon. I’m constantly trying to learn new skills and shots while fine-tuning the basics. Something I hope to improve for the coming seasons is my footwork, as this is an important part of my position on the frontline. Also, I hope to avoid getting carded/penalty minutes because my team needs me on the field, not off the field. I blame my aggressiveness on playing with an all-boys soccer team since the age of six. I felt like I always had to prove to myself and others that I was able to be as physically strong as they were. That mentality has stayed with me on the field hockey pitch.

DM: As you move forward in your career as an athlete, is there anything you plan to do to put yourself in a position of leadership? What are some goals that you have for the end of this season and subsequent seasons moving forward?

HM: One thing that I am currently doing to better my leadership skills is taking a military leadership class with other athletes here at Wake. We learn about almost every topic you can think about. We have some of the most brilliant leaders come in to talk to us so that we can learn from the struggles that they went through as leaders. We have one more regular-season game left against Louisville this upcoming Saturday. I hope the team can come away with a big win and give ourselves a chance at a bid to the NCAA Tournament so that we can go dancing! Our first goal is to be ACC champions. Then, win an ACC tournament championship. Finally, bring back the National Championship trophy to Wake Forest.