Preparing a venture to the Magic Kingdom 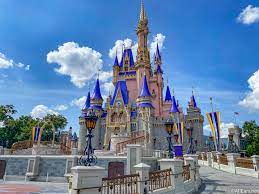 Cinderella’s castle offers a welcoming gateway into the magic kingdom of Disney World, a park that invites all guests to live their childhood fantasies.

If I really think about it, it isn’t at all strange that I’m eagerly awaiting a trip to Disney World. Though I’ve thoroughly decried the negative effects of capitalism in many articles, there’s only so much that I can refuse to participate in. And yes, Disney World is that cutoff. Understand this: Disney World is arguably the pinnacle of pleasure that a middle-class consumer can reach. If I’m going to live in a late-stage capitalist society, I must undertake its rite of passage.

Come to think of it, there isn’t another place that embodies the word cutoff more than Disney World — at least beside Disneyland — to an admittedly lesser extent. Both parks represent dozens and dozens of fantasy worlds brought to life. There is no corporate experiment that has embedded itself deeper within American culture than these two places.

Remember, this is the nexus of one of the world’s most powerful monopolies  (need I remind you that Disney has successfully monopolized entertainment itself). That is a commanding achievement. Sure, politicians might be able to write laws and more or less decide the fate of millions of people, but doesn’t Disney’s sizable grasp on the attention and minds of multiple generations somewhat rival that power?

In fact, it’s almost a farce to mention to someone that you haven’t been to Disney World. When I add that I’ve been to Disneyland, it doesn’t even matter to them. I have to go to Disney World. My incredulity at that truth, combined with some healthy and natural skepticism, has led me to be a bit antsy and impatient about the trip that is four and a half weeks away. I’ve been eyeing all things Disney, including their new inclusion development. Apparently, they’re adding “gender-inclusive hairstyles, jewelry, nail styles and costume choices,” according to Experiences and Products Chairman Josh D’Amaro.

I’ll admit, it’s good to see such progress. Kids need an introduction to what the world should look like, not outdated standards that aren’t accepting of how people have changed. If I may, however, I’d like to take this student-newspaper spotlight to remind the ultra-dystopian entertainment monopoly juggernaut, Disney Inc., that they filmed a portion of their recent live-action adaptation Mulan in the Xinjiang Province, outside the Uyghur concentration camps. A super-company worth hundreds of billions of dollars and the authoritative voice of American entertainment willfully ignored — thereby enabling — the torture and suffering of thousands of innocent people. Now that isn’t very progressive, is it?

But fine, Disney, I’ll still go to your damned theme park. I can still have my criticisms about Disney, but nothing will ever come of them. Everything I do and every purchase I make enables the United States government, which refuses to do anything to oppose the Chinese government’s human rights violations. So, why not go to Disney World and make memories with my friends? It’ll only cost around $700 after all.

This is the beginning of my summer “plans” — a new word that has replaced the “vacation” which I so often happily anticipated as a kid. When you grow up, what once concerned fun becomes focused on making something of yourself. I’m holding out hope that you can still combine the two.

In many ways, Disney World is the start of my “plan” to be happy. To tell you the truth, I didn’t really want to shell out hundreds of dollars for an experience I would have enjoyed more as a child. The reason I made the decision to go is because of the alternative: There’s a danger in declining to go to Disney World. It’s the danger of being a contrarian, the danger of spending your life refusing to investigate what makes other people happy, the danger of staying where you are and doing what you’ve always done.