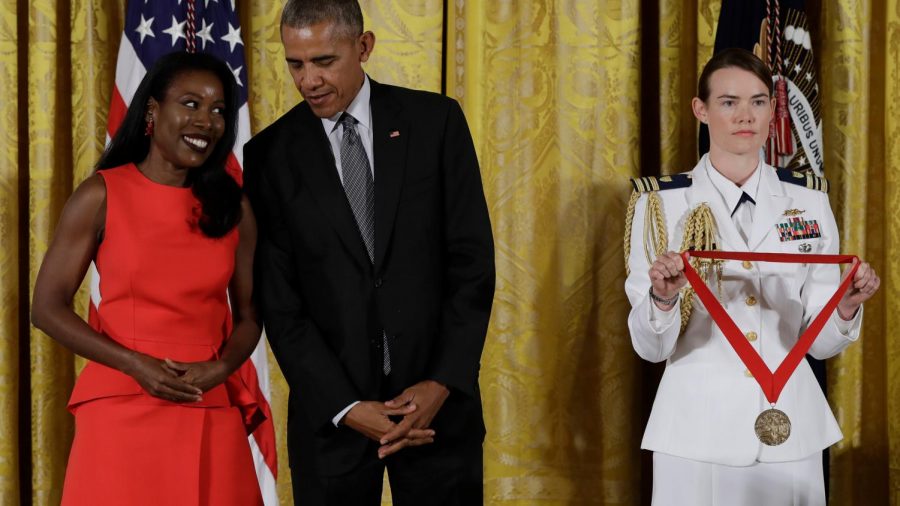 Isabel Wilkerson has won many awards for her writing, including the National Humanities Medal (award ceremony pictured above), which she received from then-President Barack Obama.

Wilkerson is a Pulitzer Prize and National Humanities Medal winner and the author of New York Times bestsellers “The Warmth of Other Suns” and “Caste: The Origins of Our Discontents”.

Wilkerson’s achievements made her a woman of firsts. After winning the Pulitzer Prize for her narrative writing while serving as the Chicago Bureau Chief of The New York Times in 1994, she became the first black woman in the history of American journalism to win a Pulitzer Prize, and the first African American to win a Pulitzer for individual reporting. Additionally, in 2016, Wilkerson was awarded the National Humanities Medal by former President Barack Obama for “championing the stories of an unsung history.”

Wilkerson was chosen to be a part of this program not only because of her impressive accomplishments, but also because of her books, which highlight social justice issues. “The Warmth of Other Suns” tells the often-overlooked story of the migration of Black citizens from the South to northern and western cities in hopes of a better life. In “Caste”, Wilkerson argues that America has been shaped by a hidden caste and human hierarchy system.

Program coordinator Avery Fields believes attendees of this event, and other speaker forums like it, will have much to gain from the insight of the speakers.

“The Face to Face Speaker Forum series will bring world-class names to Winston Salem, catalyze unifying conversation in the community and provide opportunities for people of all walks of life to engage in intellectual experiences,” Fields said. It will develop intentional points of engagement for students, and net proceeds for the program will fund scholarships.”

The next keynote event will be on May 4 and will feature Yo-Yo Ma, world-renowned cellist and winner of multiple Grammy Awards.