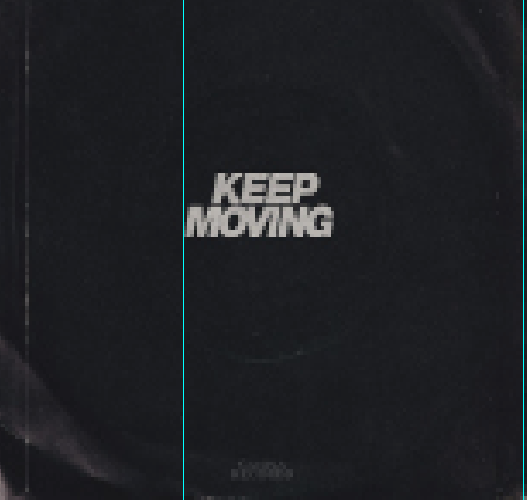 Jungle’s new single “Keep Moving” feels like it comes right from Chic’s 1979 album, “Risqué”. A seamless connection between two lead singers creates a similar force.  Their chants usher listeners to the dance floor like a call to conversation. This power of movement encapsulates itself in the inflections of two disparate entities calling out as one. Strings swipe in and out of the song, making shrill peaks of sonic excitement.

This is clearly an unabashed celebration of disco, but that is by no means a new concept in modern music. We’ve seen a reemergence of disco in the pop sphere by other artists. In fact, I often claim that what makes a new song great is its utilization of a classic disco backbeat. By backbeat I mean a particular loop of bass and drums that is inescapably groovy, often accompanied by a punchy guitar lick. That hypnotic sound plays over and over again making the desire to dance unstoppable. I note a similar type of beat in songs like Maroon Five’s “Makes Me Wonder”, Bruno Mars’ “Treasure”, Dua Lipa’s “Don’t Start Now”, and Coldplay’s “Adventure of a Lifetime”. Beware — once you recognize it, it begins to underweave many of the catchiest songs you know.

However, where Jungle diverges from the mere implementation of a musical motif into their material is through a retirement, their music is their refinement of purpose for their disco inspiration. Their heavy disco influence evolves past the kitsch of merely injecting the signature punchy backbeat into a pop song. Rather, it expresses an ethos — an approach to their music. Like a continuation of the thesis of disco. It is an expression of strife and struggle by release as heard through a tension of strings set behind a toe-tapping beat and infectious chants. To harken back to the discotheque is to acknowledge the context around the music Jungle is making.

The song epitomizes a continued conversation surrounding the much-maligned genre of disco, and this appreciation and expression serves to reinforce its relevance. I find Jungle most similar to the band Chic in this regard, as the group is attempting to be as Chic was — a suave, sophisticated refinement of a genre mired in frivolity. Their sound and look share a kinship that is undeniable. I hope that their goal is also the same: to illustrate disco’s transcendent power to bring people together through music.

Disco was hated in its day for being an avenue in which minorities could be heard. Alice Echols describes in her book “Hot Stuff” an industry controlled by gay men in which their liberation could be celebrated.

And for the past few years, Black women have dominated the charts with music about their own sexual liberation, as well as rekindling the conversation about Black masculinity. Echols reclaimed the idea that “Disco Sucks” by recontextualizing why it was so disregarded in its time. Jungle is facilitating a similar recontextualization, one that takes its sonic cues from the disco dance floor and puts it into the pandemic-riddled and glaringly unequal world of 2021.

Their latest song repeats over and over again, “Keep Moving” — chant made of the same stuff as “Aint No Stoppin’ Us Now” by McFadden and Whitehead. Both serve as an acknowledgment of the difficult world we find ourselves in today, yet provide that much needed form of release. Through the incorporation of so many disco elements, Jungle is rekindling what disco originally set out to do — create an escape from the exceedingly cruel world.