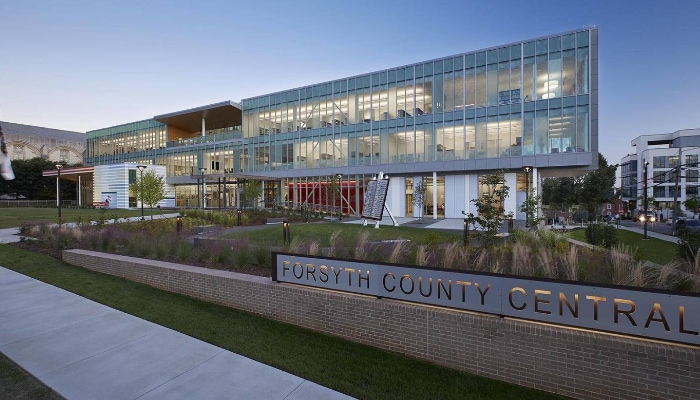 Last March, Dawn Sechrest and her daughter visited Forsyth County Central Library for the first time since its reopening in August 2017. They stopped inside at the recently opened Moji Coffee to order one decaf coffee, one fruit smoothie and two gluten-free scones before heading to the youth section of the library.

“[We] had no idea things were about to shut down,” Sechrest said.

Eight days after Sechrest and her daughter took their first trip to the library on March 17, all 10  branches of the Forsyth County Public Library shut down due to the onset of the COVID-19 pandemic. From hosting testing sites to contact tracing, the library continued to engage with the community during its shutdown. The library began to safely reopen on June 29, but the “normal” functioning of the library system had to adjust.

One of the largest challenges for the library has been balancing the reopening process while still prioritizing safety. The challenge has affected how the leadership team has dealt with how, and when, the hours and occupancy limits of the library should change.

“You know, we look forward to when we can reopen up fully and perhaps have even more hours than we had prior to COVID,” Brian Hart, Director of Forsyth County Public Library system, said. “But we have to be very intentional and slow and methodical about it because we don’t want to appear to be encouraging people to do things that would not keep them or their family safe. Or our staff safe, for that matter.”

One program that has been halted during the pandemic is the career support workshops hosted for community ex-offenders. Three Wake Forest University professors worked with library Peer Support Specialist Jose Perez in order to run the workshops. Brian Calhoun, one of the professors who ran the workshops, said the Central Library was an ideal location for the program because of its accessibility to public transportation. This accessibility meant that participation was more readily available for community members.

Participants engaged in a series of strengths-based career counseling sessions and earned a certificate of completion at the end. The workshops included topics such as resumé writing, interviewing skills and job search strategies. Prior to COVID-19, the program had seven graduates, five of whom were employed by the day of graduation. According to Calhoun, witnessing the growth in these workshops was “empowering and really rewarding for everyone involved.”

Operationally, almost all of the library services and program methods have transitioned to virtual platforms by using tools such as Zoom, Facebook Live and Microsoft Teams. Events such as book clubs, trivia games and genealogy help are all held via Zoom as well. Budgetarily, resources that would have gone towards print collections were instead allocated to improving the digital collection, Hart said.

A new, to-go pickup system was introduced on March 20, 2020, which allows anyone with a valid Forsyth County Public Library card to reserve books/materials online or by phone.

The to-go system is one that 20-year-old Wake Forest student Elise Burger has found to be particularly useful, even since the library has reopened. Although she feels safe with the in-person regulations, she has become “much more likely to place holds and just pick up books that she’d like to check out.” In 2020, Burger read 164 total books, and 126 following the months of March. This year she has already read 15 books — averaging one book every five days. She reads a mixture of fiction and non-fiction books, noting that she likes the library displays for different months, such as Black History Month or Women’s History Month.

“[The displays] help me find books that are relevant and important, and books that will challenge me and make me question things I think I know,” Burger said.

Whitney Frack, mom to two girls ages five and seven, shares Elise’s sentiment. Although her children are thrilled to be back inside the library, her family still uses the pickup service. “I love the convenience of that service,” Frack said.

There may be more changes on the horizon for library operations. An application was submitted on March 1 for a grant of $64,016 that would provide RFID technology for three branches of the library, including the downtown Malloy/Jordan East Winston Heritage branch. According to the grant application, this technology would be used for self-checkout kiosks and to enhance security measures.

Beyond operations and budgets, there is more in store for the community as things begin to shift away from an exclusively virtual world. It is this virtual world, which has resulted from the COVID-19 pandemic that has caused a newfound appreciation for outdoor programs, which are high on the priority list for library staff.

In addition to resuming programs that existed prior to the COVID-19 pandemic, future programs are likely to take place outside, according to Hart. Yoga and taichi, which previously occurred inside, will be more likely to move outdoors. Weather permitting, there may also be drive-in movie screenings added to the program list.