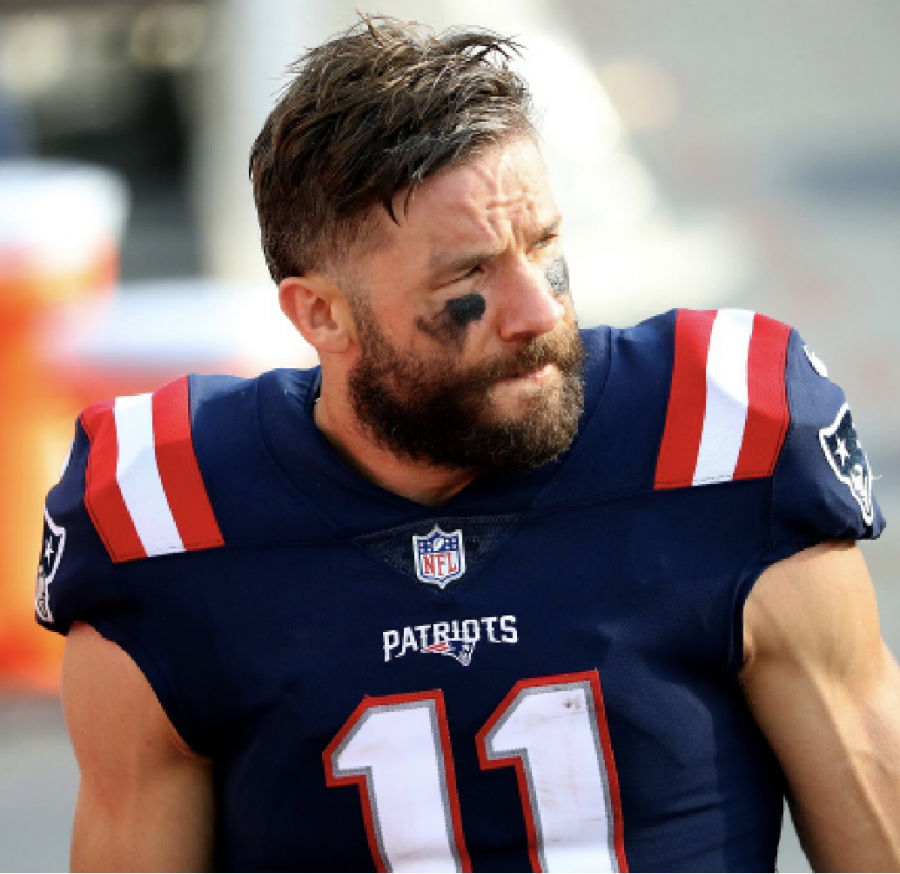 Edelman was the game MVP when the Patriots won Super Bowl XLIII against the Los Angeles Rams. He caught 10 passes for 141 yards.

On Oct. 10, 2019, the defending Super Bowl Champion New England Patriots hosted the New York Giants in a Thursday night primetime game. The 5-0 Patriots had a red-hot defense that was setting the league on fire. With a fearsome front seven and a secondary which included the eventual 2019 Defensive Player of the Year Stephon Gilmore, the 2-3 Giants did not seem to be a true threat.

While I was confident that the Giants would not come away with a win that Thursday night, history has taught me that Giants-Patriots matchups are anything but predictable. The last time the Giants and Patriots has squared off in November 2015, the final score of the game came on a last-second 54-yard field goal that resulted in a 27-26 win for the Patriots.

During that game, however, wide receiver Edelman suffered an injury to his foot that would force him to miss up to six weeks of action. Such would be problematic for an offense that revolved around Edelman’s ability to open up the middle of the field.

Fast forward four years to a beautiful, fall evening in Foxborough, Mass. in 2019 when Edelman was healthy and active for the matchup against the New York Giants. I was in attendance for this Thursday night matchup in Foxborough, and about three hours before kickoff, I decided to take a lap around Gillette Stadium before heading to my seat. As I wrapped around the side of the stadium — away from the tailgates and away from the stores in Patriot Place — I could hear the slight thud of what sounded like somebody setting a volleyball. Away from all of the activity bustling outside of the stadium, I walked toward the subtle noise.

To my surprise, I found an alley with one sole security guard, an athletic trainer and Patriots wide receiver Edelman working on his hand-eye coordination by throwing and catching tennis balls against the wall.

Edelman, wearing his Bose headphones as he warmed up, was locked in. I had never had any experiences being that close to a professional athlete, especially not one who was as famous as Edelman.

About half an hour later, I stood in line for an autograph from former Patriots receiver Deion Branch who was signing memorabilia for fans before kickoff. As I approached the table, I said to Deion, “I just saw Edelman catching tennis balls off the side of Gillette Stadium, did you ever do anything like that?” Deion Branch chuckled, looked back up at me, and said jokingly, “Nope. That man Jules sure is a clown.”

Branch, just like myself and many other Patriots fans, knew that Edelman was the hardest working man in the building. His determination, grit and dedication allowed him to thrive and develop into an NFL legend.

Rewind a bit to opening day of the 2008 NFL season when Patriots star quarterback Tom Brady experienced a gruesome hit to the knee delivered by Kansas City Chiefs defensive back Bernard Pollard. As a result of the hit, Brady tore both his MCL and ACL and would miss the rest of the 2008 NFL season.

The news was devastating for Patriots fans. Just months earlier they had suffered the heartbreak of an Eli Manning miracle that resulted in a Super Bowl loss and an uninspiring end to an undefeated season. Now, as the 2008 season began featuring a reloaded Patriots roster poised to dominate their schedule once more, the team would have to move forward without the player many now recognize as the greatest quarterback of all time.

Despite some offensive struggles, the Patriots’ weaponry still often proved too potent for many NFL defenses. Further, the team’s defense ranked No. 8 overall in the NFL. With former 2005 seventh-round pick Matt Cassel leading the Patriots at quarterback, they were able to tough out an 11-win season. Historically, an 11-win season in the NFL would  guarantee a playoff berth, but a loaded AFC meant that the Patriots were going to miss the playoffs for the first time since 2002.

While the Patriots paced the NFL with a league-best 39-9 record from 2006-2008, dual-threat quarterback Julian Edelman was busy trying to will the Mid-American Conference’s (MAC) Kent State Golden Flashes to a winning record. The five foot ten Redwood City, Calif. native never experienced a record over .500 while playing for the Golden Flashes. Despite the hardships the team faced, Edelman posted solid numbers as a quarterback, totaling 4,997 passing yards, 30 passing touchdowns, 31 interceptions, 2,483 rushing yards and 22 rushing touchdowns over 31 games played at Kent State. His big-play-ability caught the eye of Patriots Head Coach Bill Belichick prior to the 2009 NFL Draft.

During the seventh round of the draft, the Patriots selected Edelman with the No. 232 pick. Edelman began his career with New England primarily as a punt returner, concluding his days as a quarterback. Edelman impressed the Patriots coaching staff during the 2009 preseason as a returner, displaying his agility, acceleration and overall versatility. Until 2013, Edelman primarily served as a kick returner, special teamer and occasional defender, taking reps at defensive back during Super Bowl XLVI against the New York Giants.

With the departure of all-pro receiver Wes Welker during the offseason leading up to the 2013 season, the Patriots signed former St. Louis Ram kick returner and receiver Danny Amendola to a five-year, $28.5 million deal. Many assumed Amendola would serve as a direct Wes Welker replacement, but what many did not account for was the arrival of Edelman as one of the NFL’s elite slot receivers.

The 2013 NFL season saw the emergence of Edelman as a premier threat in the Patriots’ offense. With the Patriots’ offense in dire straits (Amendola missed games due to injury, and all-pro tight end Rob Gronkowski spent most of the season on the injured reserve list), Edelman quickly became one of Tom Brady’s most trusted targets, racking up his first 1,000-yard receiving season in the NFL. After a loss in the 2014 AFC Championship game to Peyton Manning and the Denver Broncos, the 2014-15 New England Patriots rolled through opponents. That season concluded with the Patriots ending their decade-long Super Bowl drought with a win over the Seattle Seahawks, and Edelman solidifying himself as one of Brady’s favorite targets.

Over the next few years, Edelman would develop into one of the greatest Patriots ever. The ultimate underdog, he began to gain a reputation as a locker room leader and fan favorite. He would provide Patriots nation with larger-than-life moments and repeatedly proved just how clutch he was. In the 2015 AFC Championship game against the Baltimore Ravens, the Patriots trailed by 10 points on two separate occasions. One of the main plays that got them back in the game  was when Edelman caught a swing pass and tossed a 51-yard touchdown pass to Amendola to tie the game. Also, who can forget his incredible catch — millimeters off the ground — after a deflection in a sea of people during Super Bowl LI?

During the 2019 AFC Championship Game against Kansas City, nobody could stop Edelman on third down, and he was borderline unguardable in the Super Bowl, totaling 141 receiving yards and winning Super Bowl MVP. Edelman’s reliability and consistent ability to get open and make crucial plays in meaningful moments are what separated him in the minds of Patriots fans from the likes of more statistically successful players like Wes Welker. Edelman’s regular-season numbers may not be enough to get him into the NFL Hall of Fame, but as suggested by his ranking as No. 2 all-time in postseason receptions and receiving yards behind only Jerry Rice, he more than earned his pay when the lights shined the brightest.

Monday, April 12, 2021, moments after reports that the Patriots had terminated Edelman’s contract due to a failed physical, he announced his retirement from the NFL. He had been battling chronic knee issues dating back to last season. Edelman left Patriots Nation with two final words: “Foxboro Forever.”

He was proud to retire a Patriot, and finished as their fourth all-time receiving yards leader (6,822), and second all-time in receptions (620).

It is hard to speculate how successful Edelman might have been had he become the Patriots’ go-to receiver earlier on in his career, or had he avoided injury, especially during the 2017 season. Regardless of his numbers, however, one cannot tell the story of the Patriots dynasty without mentioning his name. One of the toughest, most versatile receivers of all time, never scared to take on a block, never frightened by any big stage, and always stepping up to the plate when his number was called, —Edelman, thank you for a great career.