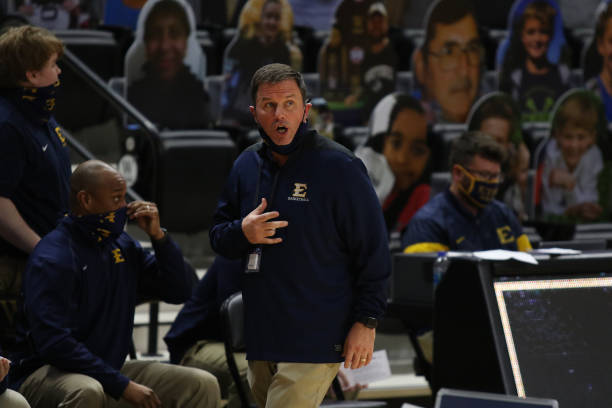 Six players from the East Tennessee State University basketball team have expressed their desire to leave the program amid the turmoil caused by Jason Shay's resignation.

To all the people who proudly announced on Facebook that they “will never watch another damn sports game until these people learn how to respect the flag of our beautiful country,” boy, do I have some good news. You can come back! While I can’t guarantee peace in the pros, come to the college level! No more silly kids pulling publicity stunts ‘to end systemic racism’ or ‘fight for equal representation.’ Just the good ol’ same exploited-teenagers-playing-some-game-without-compensation-or-guarantee-of-healthcare-but-at-least-they-are-getting-their-communication-degree entertainment for you and as many drunk sunburnt buddies your heart desires.

I know it’s been a while since you last paid any attention to sports with the boycott and all, so I imagine that you need some new teams. May I suggest two stellar Division-One basketball programs? Make sure you grab your Wake Forest and East Tennessee State jerseys (no the money doesn’t go to the players — why should it?) before they sell out because I imagine everyone is proud to be associated with these teams. They were elite powerhouses before donors canceled funding, forced coaches to resign and drove players into the transfer portal and they’ll be elite powerhouses after.

If you are reading this piece, you probably read Essex Thayer’s article last week about donors forcing the Wake Forest women’s basketball team to stop kneeling during the national anthem. Absolutely wild situation. Of course, the donors are not obligated whatsoever to fund the team or act in a way that pleases the program or students on campus. That’s the duality of “freedom.” But did they even care to think why the team was protesting? Because if they did maybe Essex’s headline should have been “Wake Forest Donors Reaffirm Pro-Structural Racism Alignment.” Don’t tell the donors about the single Black Lives Matter yard sign in front of Manchester or else the entire track team is going to be forced to enter the transfer portal.

What you may not be aware of is that a similar incident occurred at ETSU around the same time. After weeks of backlash from donors, state senators and Johnson City residents, head basketball coach Jason Shay resigned and at least six players expressed their desire to leave the mountain metropolis. I recommend reading senior guard Jordan Coffin’s op-ed published last week in The Players’ Tribune entitled “Our Coach Should Still Be Our Coach.” Coffin says that he and many other players believe that Shay was forced to resign and how this protesting had ensued for months before those sending hate mail caught wind in late February.

I have written about protesting in sports and during the national anthem in the past. I am all for it. There is absolutely no disrespect in peacefully protesting during an American ode that so proudly flaunts the best of the best while ignoring systemic societal shortcomings. It is probably one of the best and most impactful times of protest. One of the things that I notice when I hear about people being up in arms about people kneeling — not the police brutality, legislation that explicitly targets minorities or any other reason for protest — is that many times, the protest goes unnoticed for a while. There could be two explanations for this. One, most people are in support of protesting and actually appreciate people using their voices and influence to promote change, or two, no one pays attention during the national anthem before a sporting event because it makes no sense and is inconsequential to the outcome of a game.

There are far worse things you can do to something that symbolizes America than protesting during a song in front of a piece of cloth. Voting for a sexual predator to be sworn into American legal power is a notable example. Many could not tell which lawmaker that I’m referring to. Blue team, red team – fight amongst yourselves, you’ll both lose.

On February 22, a week after the initial ETSU game that sent shockwaves through the south, a letter was sent from 27 state senators to the chancellors of Tennessee’s public universities “encourag[ing] each of you to adopt policies within your respective athletic departments to prohibit any such actions moving forward.” In other words, no more kneeling. Their argument is that once an athlete dons their Tennessee-representative jersey, they are no longer autonomous and allowed to act without forethought into how the state would like to be represented. And I get this argument. No one wants to be falsely categorized into something they are not, no matter the situation or scale. But student-athletes don’t represent states, lawmakers voted into power do. And those more concerned with menial issues like basketball players rather than legislation that will actually benefit society are not great representatives.

As Coffin said in his open letter, “One of the saddest things about all this, and something I’ll probably never be able to fully move past, is knowing that if it hadn’t been for us kneeling, Coach Shay would still have his job. If not for us trying to do something we believed in, trying to make a positive difference in the world, Coach would still be living his dream, getting his shot to show the world what he can do… I mean, if somebody lays their job down and puts their livelihood on the line for you, it really shows what type of man he is.”

Jason Shay should still be employed at ETSU. No Buccaneer, Demon Deacon or any other athlete across the country should feel scared or unwelcome to use their voice. Especially when that protest concerns their life.