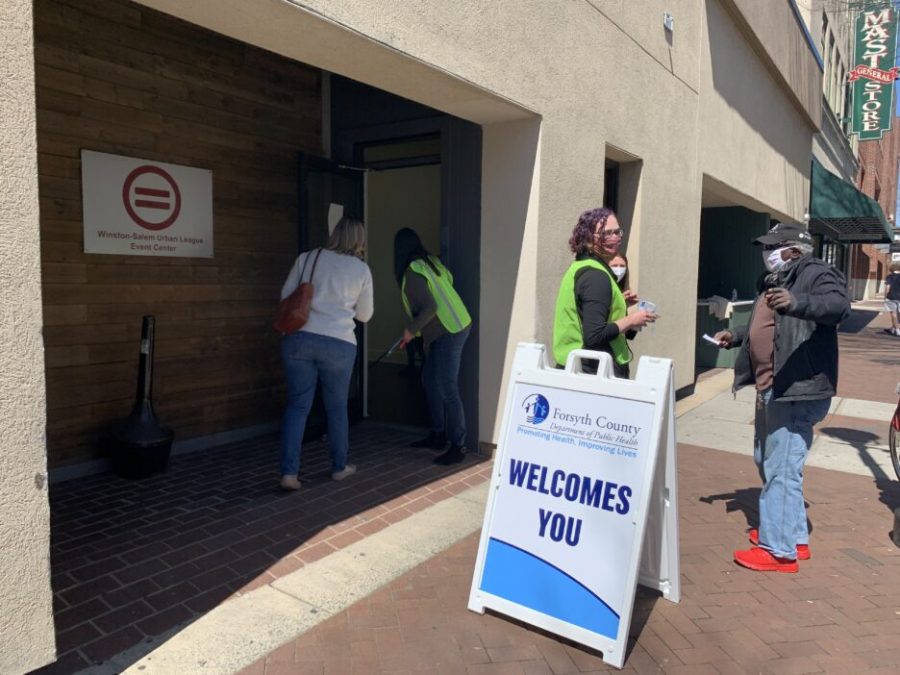 The Urban League helped vaccinate 335 people on March 29 at an event.

At this community vaccination event on March 29, the Urban League helped vaccinate over 330 city residents with the Pfizer vaccine, according to the Forsyth Department of Public Health. While a number of those vaccinated made appointments before arriving, others were invited 40 participants as they walked by the site that morning.

“I wanted to be safe and I wanted to show support for people around me that the vaccine is safe,” Joseph Laws, a middle-aged man who works in the downtown area who received the vaccine, said.

The Urban League — an organization that empowers communities of color — hosted this event with the primary goal to expand vaccine access within African American populations. To accomplish this, the Urban League promoted the event within its existing networks which can effectively reach a large African American audience, according to the organization’s Chief Operating Officer, Kenneth Pettigrew.

“Our whole mission is around advocating on behalf of African Americans and other marginalized groups through education, charity, civic engagement and other outlets,” Pettigrew said. “Our participation in the vaccine event was just that — it’s about making sure that the proper outreach and marketing happens so folks can get access to the vaccine.”

The Urban League’s effort to distribute the vaccine among traditionally marginalized groups falls within Forsyth County Department of Public Health’s campaign to broaden equitable vaccine access. This department has engaged in many vaccine equity initiatives by including hosting vaccine events with community partners like the Union Baptist Church, promoting vaccine education on social media and offering evening and weekend vaccine appointments.

This outreach campaign is uplifted, in part, by an additional 3,510 doses of the Pfizer vaccine that the Winston-Salem area will receive weekly until mid-May. The Forsyth County Department of Public Health, Novant Health and Wake Forest Baptist Health all share these doses and dedicate them to different initiatives. The Forsyth County Department of Public Health is using their third of this allotment to supplement ongoing community outreach efforts.

These efforts seek to alleviate disproportionate vaccination rates across races. As of April 12, 70.8% of those fully vaccinated have been white, slightly higher than their 67.7% share of Forsyth County’s population, according to the North Carolina Department of Health and Human Services. This data also reveals that only 19.4% of those fully vaccinated have been African American, despite making up 28.5% of Forsyth County’s overall population.

Vaccine hesitancy within communities, however, may thwart attempts at equitable access. This hesitancy is often a byproduct of historically justified mistrust in the American health care system within a segment of the African American population, according to Chief of the Section on Infectious Diseases at the Wake Forest School of Medicine Dr. John Sanders. Motivating vaccine acceptance within community organizations’ social bases will be essential in overcoming inequities in vaccine distribution.

“We already have so many health disparities in our community and in our country,” said Annamae Giles, a volunteer at the Urban League’s community vaccination event. “We really need to work hard to make sure everyone has equitable access to the vaccines so that we can all get back to life, not just those of privilege.”