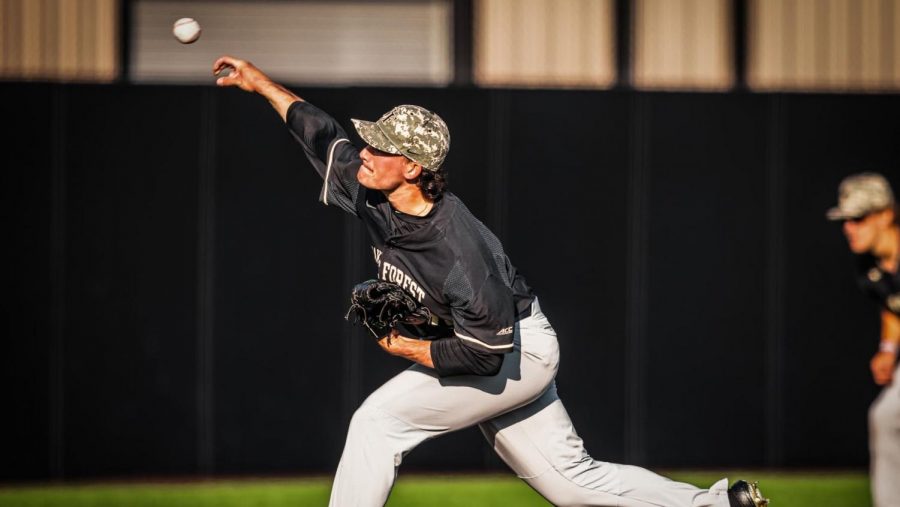 Mascolo has pitched in nine games this season, and Wake Forest has won four out of his five starts. He threw a season-high five strikeouts at Appalachian State.

Hailing from Fairfield, Conn., Reed Mascolo is a pitcher on the Wake Forest baseball team. After attending the Brunswick School and earning three varsity letters throughout his time in high school, Mascolo spent the 2019-2020 school year at Seton Hall University, where he pitched in three games before the season was cut short due to the COVID-19 pandemic. He then transferred to Wake Forest. Mascolo is an academic sophomore but is considered a freshman baseball player for the Demon Deacons. His older brother, Chase, also played baseball for the Deacs and graduated in 2020. Though this is Mascolo’s first year at Wake Forest, his previous college baseball experience makes him stand out from other freshmen.

Christina DeNovio: How did you first get involved with baseball? How old were you?

Reed Mascolo: I’ve been playing ever since I was in T-ball as a little kid. My best friend’s dad always coached us, and I guess that was a big reason why I stuck with it for so long. I really didn’t get serious with it until high school, and that’s when I decided I wanted to play in college. From then on, I’ve pursued it with great passion and I’ve loved it ever since.

CD: What drew you to pitching?

RM: I guess I was just always better at it. I wasn’t that good of a hitter, and I was always a better pitcher. They told me if I wanted to play at the next level, then I should be a pitcher, so I just stuck with that and focused more on that than hitting and whatnot.

CD: How did you end up at Wake Forest?

RM: I recently transferred here. My brother went here, and I always liked the school. I took a different path out of high school, and it ended up not really working out. I decided I wanted to leave, and it just so happened that a spot opened up here, so it’s been working out really well. I’m just super happy that I got the opportunity to play here.

CD: What was it like having a brother that not only played baseball, but also played for Wake Forest?

RM: It’s cool. He’s not playing this year, but he’s still here as a grad student. I still get to see him all the time, and going to school with him is cool. I got to play with him a little bit in high school. It would’ve been really great if he was still playing this year and we got to play together. Still, he was a really hard worker and kind of paved the path for me and made my role a little easier coming in.

CD: What do you like about being a part of the team here at Wake Forest?

RM: I think we’ve got a really good group of guys, we’re close-knit. We’ve got a lot of culture and team chemistry, and I think the energy lately has been a lot better. No matter if it’s a younger guy or an older guy, everyone’s pulling for each other, and everyone just does a great job of getting behind their players and working for each other. We get along really well.

CD: How does it feel to be part of such a young, up-and-coming team, especially as one of the several freshman pitchers?

RM: It’s good. This year’s been a little tough, too, because our team’s so young and the hardest jump to make is from high school to college baseball. I think the COVID freshmen and true freshmen have all done a really good job of adapting to that change and stepping up into some big-time roles. I think, going forward, it’s going to be a really great group of guys and that there’s a lot of leaders on the team, including younger guys who have stepped up this year and haven’t acted like freshmen but more like upperclassmen. They’ve been really mature.

CD: You recently had a very successful outing against Appalachian State with five strikeouts, no walks and only two hits. How does that kind of game boost your confidence and belief in yourself going forward?

RM: At the beginning of the season I had a couple of rough outings, and I didn’t throw that well. It’s never fun not throwing well. I just stuck to what I was good at and kept focusing and working hard. When my next opportunity came around, I made sure I went out there and gave it everything I had. I’ve just been rolling since then, and I’ve been trying to keep that same energy every game. I’m trying to keep the same approach I’ve had in the past. The coaches have been great — [Assistant] Coach [John] Hendricks and [Head] Coach [Tom] Walter really helped me out this year, pitching-wise. They have helped me by boosting my confidence and getting me ready for the season. All the guys supporting me really helped. I’ve been learning from the coaches, I’ve been learning from the guys. It’s just a great experience here, and it’s a great learning culture to get better and become a better player, on and off the field.

CD: What would you like to improve on during the rest of the season?

RM: I just want to keep throwing well, doing anything I can to get our team a shot at the ACC Tournament this year and potentially get a regional bid. That is tough with our record right now, but if we just keep working hard, we’re definitely capable of doing that. We have enough talent to do it.

CD: Have you set any personal goals for yourself for your remaining seasons at Wake Forest?

RM: It was a big step even getting here. The biggest thing was to just get on the field and help the team in any way I can. I found myself falling into a reliever role, and then eventually a starter role during the mid weeks. My big goal is just to try to help us win and throw well. Everything’s been working out well so far, and I want to continue going down that path, and be successful in any way I can.

CD: Do you know what you would like to pursue after baseball?

RM: I’m an Economics major. I’m not 100% sure of what I want to get into, but my dad does a lot of retail, so I’d probably like to do something along the lines of retail and sales.

Editors Note: This interview has been edited and condensed for clarity and brevity