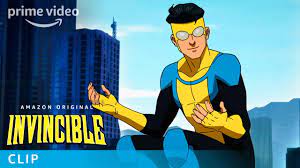 2021 has delivered many entertaining comic book-inspired shows so far, and many more are on the way. Shows like the MCU’s “Wandavision” and “Falcon” and the “Winter Soldier”, as well as DC/CW’s “Superman and Lois” have kept fans excited and eager for each new episode. While Disney+ typically dominates Fridays with their MCU releases, they have been met with quite the challenge recently. Amazon Prime Video’s “Invincible” has quickly become a hit in the last month, gaining more and more attention each week. The animated show follows a very different, but familiar superhero universe, created by Robert Kirkman, who already created the “Walking Dead”. The show is based on the comic of the same name written by Kirkman and stars an amazing cast led by Steven Yuen as the protagonist Mark Grayson. Currently, the show is six episodes into its eight-episode first season.

The pilot episode of “Invincible” is an amazing diversion to what is at the core of the series. First, we get a superhero universe largely modeled after DC Comics’ where there is a main superhero team similar to the Justice League who save the day whenever the world is in danger. At the head of this team is Mark’s father Omni Man, a hero from a different planet who arrived to become Earth’s strongest protector. Mark is in his last stage of puberty praying that his powers will finally arrive while simultaneously facing the challenges of everyday high school life.

The episode is built up to be the standard family-friendly origin story, but it ends up being so much more. Invincible is violent, gruesome and filled with twists and turns in each episode.

The cast for the show is star-studded and Kirkman makes sure not to hold his punches in recruiting the best talent even for only one or two episodes. Invincible primarily stars Steven Yuen, J.K Simmons, Sandrah Oh and Zazie Beats, but also features big names like Mahershala Ali, Jon Hamm, Mark Hamill and Seth Rogen throughout various episodes. It’s often a secondary thought to note who is who because you’re so focused on the story and characters that they bring life to in such an impressive way. Yuen and Simmons have great chemistry together as a father-son duo, and Beats does a good job playing Amber, who becomes closer with Mark each episode.

The world-building of the show also deserves praise. Within just a couple of episodes, Kirkman provided a whole world of diverse superhumans, and villains to counter them. Bringing influence from another already well-established company like DC Comics allowed him to format a world that fans didn’t need much getting used to, but became something of its own soon after the first episode. Viewers constantly get introduced to new characters with unique abilities that aren’t limited to the typical super strength or speed. Characters like Atom Eve with her ability to alter reality or Duplikate who constantly makes duplicates of herself that die time and time again in battle make for some very exciting action scenes that along with the over the top violence results in something many fans have not seen before. Only “The Boys”, another Amazon show, really compares “Invincible” in its violence and world-building. Both shows maintain a connection to superheroes and the government, and explore the ramifications of trusting these individuals too much.

Overall, “Invincible” is definitely a worthwhile watch and asserts itself dominantly as something out of the ordinary. The stories are much different than the typical comic book-inspired show, but are exciting to watch nonetheless. It feels like a crime to make this season only eight episodes long, and hopefully, Kirkman is able to extend this story for as long as he can in the following seasons.