“Jurassic Park” offers insight into the future of theme parks 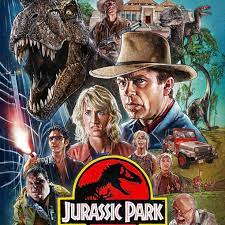 The cover art for the film “Jurassic Park” depicts the leads protagonists narrowly escaping the clutches of the park’s most dangerous beast.

I remember the muggy night in the summer of 2015 when my parents selected a movie that, until that year,  I had been sheltered from because my parents thought its graphic imagery would upset my soft spirit. Throughout the entirety of “Jurassic Park”, I was entranced.

I grew to adore the film so much that I saw “Jurassic World” in the theater later that summer. I found the original novel and read it in five days — later, I obtained and read the sequel as well. I raved to my friends to the point where one of them mentioned to me that this had become a sort of obsession. I’m not alone in feeling this way. The famous techno-thriller had a colossal effect on the film industry, American pop culture and generations of viewers. It packs a philosophical punch, as well.

Prior to “Jurassic Park”’s release, many artistic visions proved difficult to adapt into live-action films. Initially, director Steven Spielberg had his creative department design animatronic dinosaurs, but when he wasn’t satisfied with the results, a member of the team convinced Spielberg to let him try computer-generated imagery instead. The final product looked amazing. This ingenious decision propelled the creation of numerous spectacular films — including “The Lord of the Rings”, “Star Wars” and more — because it prompted directors to reconsider what was possible.

The general public felt the ground-shaking impact of Jurassic Park as well. Thanks to legendary composer John Williams, many people can recognize the movie’s main theme almost instantly. It flawlessly suits the characters’ sheer sense of awe at seeing a gigantic, living dinosaur for the first time. Such miraculous wonders planted inspiration in the minds of countless young audience members, some of whom grew to become archaeologists, geologists and paleontologists and continue to make new discoveries today. Iconic scenes and quotes from “Jurassic Park” have been adopted into meme culture, as typically happens to either very good or very bad films (this case is obviously the former). Undoubtedly, “Jurassic Park” was well-deserving of its brief stint as the highest-grossing film of all time.

Although the source material is far more nitty-gritty, the movie cleverly adapts the novel’s technical and philosophical ideas. Modern technology is developing faster than ever, and this raises ethical concerns. The book’s author, Michael Crichton, utilized the character Ian Malcolm to voice his thoughts on humanity’s dilemma.

In the movie, Malcolm expresses concern regarding how the geneticists focus solely on how they could make dinosaurs without stopping to consider whether they should. The consequences of their creations become increasingly evident and were also foreshadowed by Malcolm’s explanation of chaos theory and by Alan Grant tying together his mismatched seatbelt ends on the helicopter ride, which symbolized the all-female dinosaurs figuring out how to reproduce.

When Wake Forest’s Student Union held a watch party for this incredible film two weeks ago, of course, I attended. Appreciating such an exceptional and poignant story is my duty as a fan, and I hope people continue to enjoy “Jurassic Park” as time progresses.