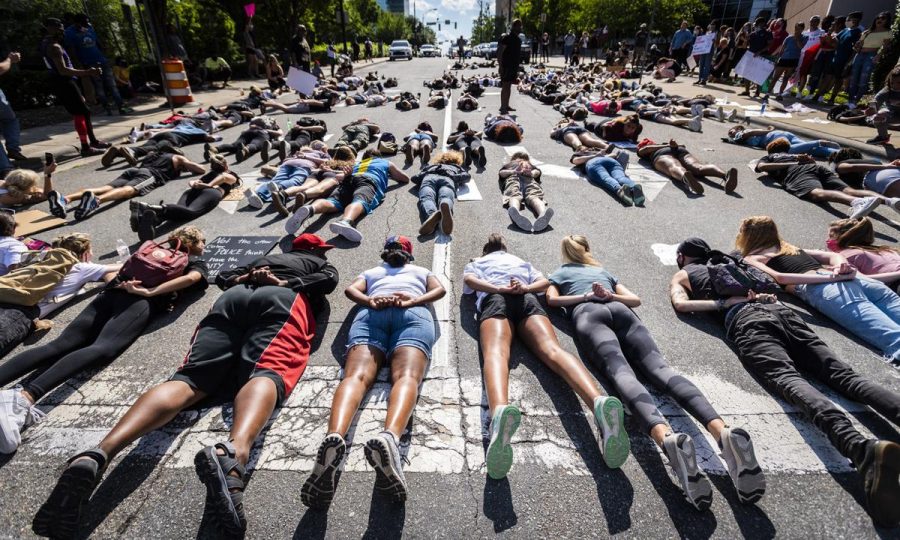 “The arc of the moral universe is long, but it bends toward justice.”

On Tuesday, April 20, after over a year of protests, activism and courtroom maneuvering, Derek Chauvin was found guilty of the murder of George Floyd. Chauvin fatally knelt upon Floyd’s neck for nine minutes and 29 seconds.

The Old Gold & Black reached out to students and monitored the web for reactions from community members to take a pulse after such a historic event. Many feel as King did, that this verdict tips the scales toward justice, but that the road to achieving this justice has been far too long. Some feel the road ahead will be long as well — perhaps even longer than the road to this moment.

Wake Forest students’ reactions to Chauvin’s conviction have been mostly positive, with a flood of Instagram stories praising the guilty verdict as a victory for justice. However, most students’ posts also recognized that the work of improving the justice system is not yet finished.

“I would say justice has been served,” Middleton said. “But there is still a lot of work to do within our legal and justice system in order to bring justice to other cases that we have witnessed since Floyd’s murder.”

Middleton encouraged students to regard this moment as a full victory and to worry about subsequent fights down the road.

“I hope students — primarily students affected by this verdict and the killing of George Floyd — are able to take a moment and just have a sigh of relief and then get back out there and demand change,” Middleton said. “We should not let this moment be a time where we let up but rather continue to seek change locally and nationally.”

Student Body President-Elect Ally Swartzberg emphasized the importance of caring for marginalized communities in the wake of the verdict and in general.

“As a community, we need to be cognizant of the very real burden this trial (and the violence which prompted it) has placed on students of marginalized identities and of the continued racial violence that still exists,” Swartzberg said. “This verdict is one step toward justice, but it cannot be the last step.”

Swartzberg also shared her hopes for the future of the movement.

“I hope that months or years from now we will be able to look back at this trial as a distinctive turning point in the fight against systemic race-based brutality,” she said.

The Black Student Alliance is also planning an event to honor those lives lost to police brutality, according to the organization’s president, Jacob Thomas.

“At Wake Forest, we are called to be people for humanity. For all humanity,” Hatch wrote in the email. “That means that we honor the intrinsic value of each individual and show compassion and empathy toward one another. This is not a hollow charge to those who consider this community home nor should it be an empty promise to the communities we serve.”

“When they send those emails, I don’t really enjoy them because I feel like they aren’t really genuine,” Duncanson said. “I’m not sure why they [send these emails], instead of just acknowledging what [Chauvin] did was wrong and how we can fix this.”

The Office of the Chaplain also released a statement, which has been spread widely on Instagram by Wake Forest students.

“So much has been said, can be said, and will be said about this verdict,” the statement reads. “But the simple fact remains that justice, peace, and reconciliation can never be fully realized in our society as long as white supremacy continues to render this verdict as rare it is.”

The statement continues: “Justice, peace, and reconciliation can never be fully realized in our society as long as the lives of Black people continue to be cut short, oppressed and terrorized by the state, and our state is not held to account for the violence and trauma it has and continues to unleash on Black people.”

The Office of the Chaplain also announced that Wait Chapel would be available Wednesday, April 21 for anyone who wanted to pray.

“Please remember to pray for the family of George Floyd. Though they go to bed tonight knowing that Mr. Floyd’s murderer was brought to justice, they will still wake up tomorrow without a brother, father and friend,” wrote Dean of the Divinity School Jonathan Lee Walton in a statement of his own. “Never underestimate the power of prayer.”

According to Hatch, Wake Forest will be providing more information about its commitment to racial justice.

“In the coming days, you will hear more about how this community is responding to and joining the effort to help address inequity, racism and the oppression of people of color,” Hatch wrote in the email. “I invite you to participate in the various opportunities that will be offered across the University.”

One event, the second iteration of a panel discussion on race and policing, will be held the night of Thursday, April 22.

“We will address the origins of racialized policing in the United States, which helps us understand the mass protests we saw this summer,” Vice Provost of the Law School Kami Chavis, a co-host of the event, said.  “We will talk about concrete solutions for transforming police culture and what entities (local, federal state) are best suited to do that.”

The event’s other host, Vice President for Diversity and Inclusion Jose Villalba, had this to say about the event’s significance:

“Institutions of higher education must serve as facilitators for learning and reflection,” Villalba said. “In this regard, it is not only relevant, but expected that colleges and universities explore why Floyd was murdered, but also address factors that contributed to Chauvin’s actions, behaviors and decisions.”

Thomas, who will be a panelist at the event, said he hopes the conversation will spur the Wake Forest community into action.

“One of my main goals is for this event to spark discourse but also move beyond discourse into the realm of activism that can be operationalized and effect change in our community,” Thomas said.

Ultimately, though, for the Wake Forest community, no matter what happens, one thing is for sure: George Floyd should still be alive.

“At the end of the day, nothing can undo Chauvin’s violent act which unjustly ended George Floyd’s life,” Swartzberg said.