Men’s and women’s tennis fall to Tar Heel squads, who advanced to finals and semis, respectively 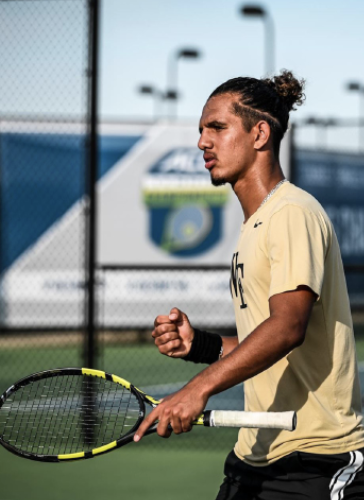 The Wake Forest men’s tennis team came up short in the ACC Tournament this past weekend. The defending 2018 ACC Tournament Champions lost in the semifinals to No. 4 UNC-Chapel Hill this time around.

After picking up the doubles point, the Deacs looked to continue their dominant streak. Squire, Baadi and junior Rrezart Cungu won in straight sets, finishing the match 4-0 before Duke even got the chance to respond. To the Demon Deacons’ chagrin, their next match would not be as one-sided.

On April 25, Wake Forest lost to the Tar Heels, a match that could have gone the other way if not for a technical infraction. The semifinal match featured two rain delays and a mid-match transition indoors.

Doubles teams Squire and Nava —  along with Efstathiou and Baadi — lost their doubles matches, allowing for the Tar Heels to take the doubles point. It looked like the Deacs would make a comeback, however, when Baadi, Efstathiou and Banthia won their singles matches, making the score 3-1.

The Tar Heels crept their way back into the match after Squire lost and Nava had a default. The referee decided that Nava took an unfair amount of time after using the bathroom before returning to the court in between sets, and thus awarded his opponent the match.

With the score tied at 3-3, Cungu’s match went to a tie breaker that kept spectators on edge. After three hard-fought sets, he lost the tie breaker 10-8, and Wake Forest was eliminated from the ACC Tournament. The Tar Heels went on to lose to the University of Virginia in the finals.

The Deacs look to redeem themselves in the NCAA Tournament this May.

The women’s team shared a similar fate, losing to No. 1 UNC-Chapel Hill in the quarterfinals of the ACC Tournament.

Singles proved to be a similar story. Brylin, Omirou, Killingsworth and freshman Casie Wooten defeated their opponents in straight sets.

The Deacs, however, had to face the eventual winners of the tournament, UNC-Chapel Hill, the next day. The Tar Heels started by taking the doubles point after Wooten and Omirou, along with Anna Campana and Pesavento, lost their matches.

Singles brought no cause for celebration to the Deacs either. The Tar Heels won three straight matches over Brylin, Omirou and Killingsworth. The Tar Heels then took down Georgia Tech in the finals for their fifth consecutive ACC Tournament win.

Wake Forest is now waiting to see if they will be making an NCAA Tournament appearance.