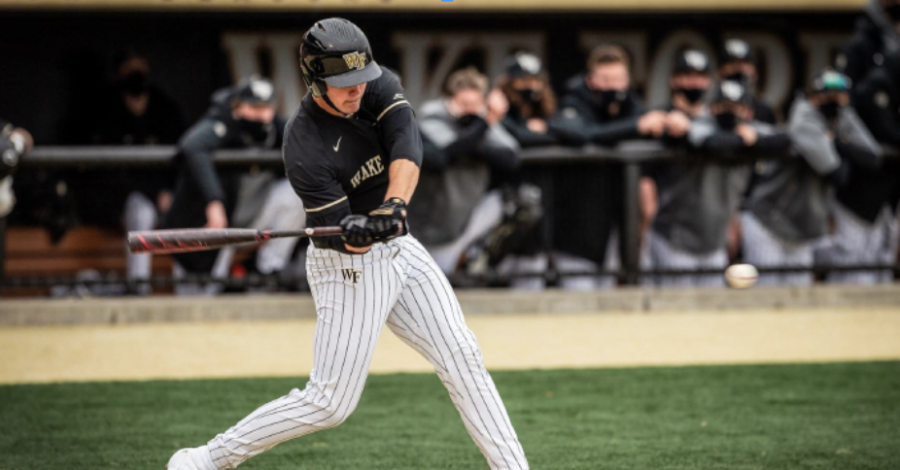 On April 20, the third baseman, Wilken, hit his 11th home run of the season, putting him seventh among freshmen in home runs in program history.

Following a rollercoaster week that included a pair of crushing losses against ACC foe Duke (-13 run differential), but also commanding victories over Appalachian State and Duke (+23), Wake Forest was looking to continue their winning ways.

The Deacons’ bats came alive against the Catamount early and often, as 14 runs were scored across the first four innings of the game.

In the first inning, Wake Forest scored four runs and forced a pitching change for Western Carolina before a single out was recorded. Freshman third baseman Brock Wilken opened the scoring with a single through the right side that brought freshman Lucas Costello home. His slugging percentage was increased to .612, moving him to sixth place in the ACC. One batter later, superstar senior Bobby Seymour hit a double to deep right-field that scored two more runs. The nation’s 2019 RBI leader leads the Deacs with 35 RBIs, a mark that puts him in fifth in the entire ACC. One more run was added in the inning off a fielder’s choice from sophomore Pierce Bennett, which made the score 4-0.

In the second inning, the Demon Deacons added three runs to their total on just one pitch when Seymour crushed a home run to right-field that brought home Wilken and junior Michael Turconi. Seymour has been hot as of late — the home run was the St. John, Ind. native’s sixth in his last six games.

The third inning was the icing on the cake for Wake Forest, with five more runs being added. The first run was brought home following a pair of singles from junior Brendan Tinsman and Bennett along with a pair of walks from sophomore Adam Cecere and Turconi. With the bases loaded, Wilken launched a grand slam down the left-field line — his 11th home run of the season — and made the score 12-0. The home run moved the third baseman into seventh place in program history for home runs by a freshman and third in the ACC for home runs this season. The Valrico, Fla. native needs just six more home runs to tie the Demon Deacon record set by Jamie D’Antona in 2001.

The Catamount got on the board with three runs in the fourth inning off of a pair of doubles from Pascanel Ferreras and Luke Robinson.

In the bottom of the fourth inning, Costello doubled to bring home Bennett and Tinsman and made the score 14-3. The Miami, Fla. native has produced a hit in 16 of his last 17 games, including 10 hits in his previous four games. In that same stretch, the freshman has eight multi-hit games and increased his batting average to .319, the highest mark on the team.

Western Carolina added a run in the seventh inning, but freshman Camden Minacci stepped in and picked up a crucial out with the bases loaded to minimize the damage. A pair of singles from Ferreras and Justice Bigbie in the eighth inning provided three more Catamount runs. Trevor Jones doubled to center-field in the ninth inning to make the score 14-8, and the scoring ended there.

In the win, six Wake Forest players had multiple hits — including three from Seymour — and the Demon Deacons had a total of 20 baserunners.

On the mound, freshman Reed Mascolo picked up his third win of the season (3-1) pitching five innings and allowing just three runs and one walk. The Seton Hall transfer has an ERA of just 2.22 across nine appearances this season. Junior Brennen Oxford and freshman Teddy McGraw each added a scoreless inning of work. Oxford has improved significantly from his 9.00 ERA in 2020 (4.15 ERA in 2021) and has been a reliable reliever for the Demon Deacons.

Despite a superb outing on the mound in the first game of the weekend road stand against ACC opponent Clemson, the Demon Deacons fell 5-2.

Clemson opened the scoring in a peculiar way. With runners on first and third base, Sam Hall stole home to give the Tigers their first run of the contest.

In the fifth inning, the Demon Deacons answered with two runs of their own. Once again, the runs came in unusual fashion, this time off a pair of wild pitches. Cecere and Turconi both touched home plate to wrangle Wake Forest a lead of 2-1.

Clemson regained the lead off a pair of singles from Kier Meredith in the fifth and seventh innings that brought home three combined runs. A throwing error from Lanzilli gave the Tigers a 4-2 lead. Errors have hurt the Demon Deacons all season long. Another Clemson run was added in the eighth inning off a double and the score was 5-2.

In the loss, the Demon Deacons mustered just five hits, two of which were from senior Shane Muntz, his fifth multi-hit performance of 2021. The catcher led all ACC hitters in OPS last season, and has been coming on as of late.

“Just gave away a few too many runs, [one] in the first inning to a hitter with 25 at-bats on the season,” Head Coach Tom Walter said. “We gave up three runs early and didn’t get it done offensively with five hits on the day. Not a ton of chances, [and we] didn’t really cash in.”

With a South Carolina storm forcing a doubleheader, Wake Forest narrowly fell in part one against Clemson, despite a ninth-inning rally.

The Tigers opened the scoring in the first inning with three runs. Caden Grice homered to right-center-field and Davis Sharpe scored on a wild pitch to contribute to the quick start.

In the fourth inning, Wake Forest answered with a three-run home run off the bat of Lanzilli that brought home Seymour and Turconi to tie the game at three. The 2019 College Home Run Derby participant has eight home runs on the season.

Clemson retook the lead with a double from freshman Jonathan French that made the score 4-3.

With one out in the ninth inning, Tinsman hit a clutch home run to left-field that tied the game at four. The catcher also set a season-high in putouts (13) and assists (2) behind the plate.

Despite the Demon Deacon’s late game heroics, Sharpe stole the show when he blasted a walk-off home run for the Tigers to clinch the series.

Seymour became the 28th player in program history to record 200 career hits on Sunday. The first-team All- American and 2019 ACC player of the year has a career batting average of .315 along with 26 home runs and 112 runs scored. He will be a prime target for many Major League Baseball teams in the upcoming draft.

In addition to Seymour’s multi-hit game (2), six other Demon Deacons produced a hit in the contest.

Two errors hurt the Demon Deacons in the loss and cost the team a crucial run. Wake Forest had an error in each game against Clemson, and a total of five in the series. The team has a fielding percentage of 0.964, 12th in the ACC.

Freshman Rhett Lowder picked up the start and lasted six innings, allowing just three earned runs and throwing nine strikeouts. The former No.12 prospect in North Carolina and a two-time pitcher of the year in both the conference and county notched his sixth start with three or fewer earned runs.  Oxford pitched 1.1 innings of scoreless relief and added a pair of strikeouts. Senior Cole McNamee was also perfect in relief.

“Obviously we made a couple bad pitches today that were the difference in the game,” Walter said following the game. “The three home runs, [were] fastballs in the middle of the plate and they didn’t miss them.”

In the final game of the doubleheader, strong pitching from the Deacon Deacons was not enough to pick up a win.

Wake Forest came out with a vengeance following the walk-off Tigers’ win in the game prior, scoring a pair of runs in the second and fourth inning off a Tinsman sacrifice fly and a Lanzilli home run. The right fielder’s second home run in as many games gave the Deacons an early 2-0 lead.

The Tigers responded with a ferocious sixth inning in which the team scored three runs off a fielder’s choice, flyout and a home run. An error, which led to the first Clemson run, would come back to haunt the Demon Deacons.

Unable to capitalize on the hot start and held without a single baserunner for the remainder of the game, the team lost their second game of the day.

Senior William Fleming had a solid outing on the mound as he lasted six innings and allowed two just earned runs while throwing six strikeouts. He picked up his fifth loss of the season despite only allowing four hits and one walk in the appearance. Following Fleming, Minacci and freshman Eric Adler combined for two innings of shutdown pitching to keep the Demon Deacons within striking distance of the Tigers.

“I thought we pitched okay up and down the day today,” Walters said, “but clearly not enough to get a win. It’s disappointing.”

After the 1-3 week, the Demon Deacons will return to the Couch for a six-game homestand, including an ACC weekend series followed by a trio of non-conference matchups in Davidson, Liberty and Elon. Wake Forest is in search of momentum as the team has lost their last three ACC series and has just one series win all season against daunting ACC opponents.