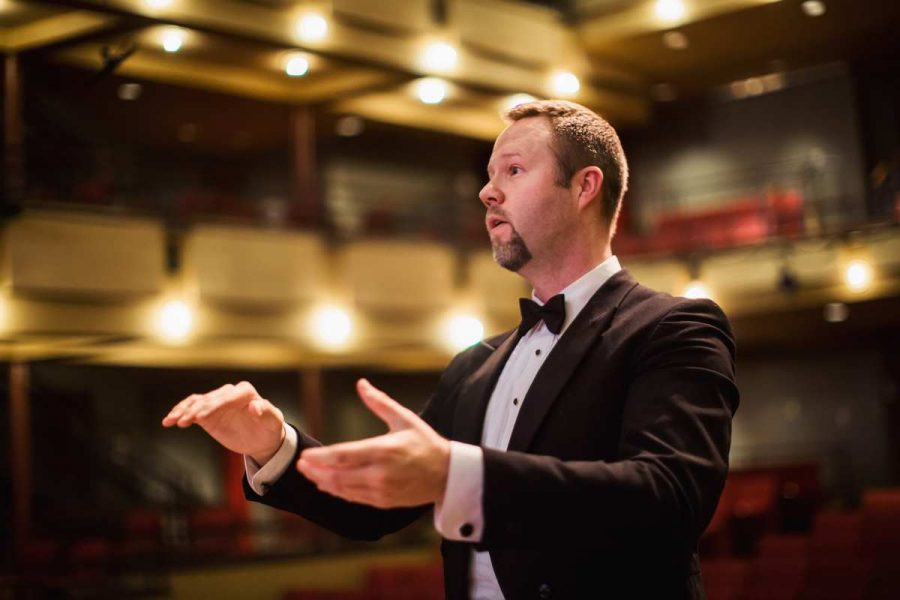 Christopher Gilliam is serving as the new director of choral activities at Wake Forest University. Before that, he held the same position at Davidson College. He is also the artistic director of the Winston-Salem based choir Vox Humana and a director with the Winston-Salem Symphony Chorus. Gilliam received a Doctor of Musical Arts degree from the University of Kansas. He is currently preparing Wake Forest’s choirs for a concert honoring female composers, which will be released virtually in May.

For the past eight years, I had been the director of choral activities at Davidson College, and for the past six years, I have also been the Director of the Winston-Salem Symphony Chorus. The opportunity to be closer to my work at the Symphony and to be able to be a contributing part of the well-respected Wake Forest music faculty was the realization of a dream for me. I am so thrilled to be a part of a thriving department with such talented and gracious colleagues, but the incredible students were, of course, the best reason I had to teach at Wake Forest.

How has your experience on campus been so far?

I have felt warmly welcomed and incredibly supported by my faculty colleagues, the administration and the students. It has certainly been a unique experience to transition to a new institution in such a challenging year, but I believe the outstanding atmosphere that is present at Wake Forest is the best possible environment in which to find oneself. I am looking forward to enjoying the full “campus experience” when things get back to normal, but for now I feel that I have a lot to be thankful for, not the least of which is having landed at Wake Forest.

What is your favorite part of being the director of choral activities?

There are so many rewarding aspects  that it is difficult to name only one of my favorites. But there is a point along the educational journey when it becomes apparent that a student recognizes they are capable of more than they had originally thought possible. When talent and intelligence merge — both of which our students have in spades — that kind of epiphany happens frequently, and as result, the quality of singing and music-making improves exponentially. That makes being a part of a musical ensemble like a choir really thrilling. It is really most satisfying.

How have you reenvisioned choral concerts and adopted changes to make them work during the pandemic?

In the summer of 2020, when we were unsure if we would be able to sing at all, I learned that Wake Forest owned a five-octave set of Malmark handbells. We set up the choir room with 10 tables spaced 10 feet apart — and following the guidelines set by the university — we had rehearsals using those, in addition to singing both outside and inside for an approved, specified length of time.

As the semester progressed and COVID-19 conditions improved, we were able to sing for longer periods of time while still rehearsing handbells. We were able to perform in the annual Lovefeast by working with the Office of Communications and External Relations and the Chaplain’s office. In Spring 2021, continuing the rehearsal and performance models that were approved by the university, we worked closely with the Divinity School to sing for their annual Holy Week and Easter Service. Divinity Dean Jonathan Walton made it possible for us to pay for the North Carolina Baroque Orchestra to accompany us in our performance.

Additionally, we partnered with the Interdisciplinary Arts Center, Wake the Arts, the Program for Leadership and the Character, Slave, Race, and Memory Project and a host of other wonderful campus partners to perform a virtual choir piece composed by Alysia Lee called “Say Her Name” in honor of Breonna Taylor and other men and women who have been victims of police brutality. We were fortunate to be able to collaborate with Maestra D’Walla Simmons-Burke and the Winston-Salem State Singing Rams on that.

Finally, we’re working on a concert entitled, “Still I Rise: The Female Voice in Creation” that features women composers of multiple genres, ethnicities, and representations. All of the concerts, including the virtual choir collaboration, will be available on the Wake the Arts website and on the Music Department social media pages soon.

Why do you believe continuing to hold concerts during the pandemic is so important?

While we are unable to actually hold live concerts, we have found that it is possible to sing together safely and continue to meet together to study various genres of repertoire and that it is absolutely vital for the students to do so.

Many classes did not choose to meet in person during the pandemic, so singing and meeting together regularly has been somewhat of a lifeline for the students, as well as for me.

What are your goals for the upcoming Female Voice in Creation Profile Concert?

Repertoire varies year by year, and semester by semester, but based on the repertoire the choirs studied in the fall and spring, I felt it important to balance our repertoire by highlighting fantastic compositions by women. Our existing choral library already had a number of compositional gems by women in it, so I was excited to share those pieces — many of which I had the privilege to sing when I was in school — with students. But, I also wanted to add to our library a number of new, outstanding pieces by living composers — colleagues of mine whose compositional voice needed to be heard. We had the privilege of actually meeting via Zoom the composer of “Say Her Name,” Alysia Lee, and that was a wonderful workshop for our singers that helped us learn more about the piece and her compositional style.

How do you hope to strengthen and grow the choir program in the coming years?

As we have the opportunity to sing and engage together, we hope word will spread regarding the disciplined, challenging but fun work we do in the choirs. My hope is that we attract the students who really want to be challenged in their musicianship and artistry, as well as those who want to learn more about music and how to build their own voice.

Also, there are many students at Wake who were once valuable members of their high school choirs, who know what it is to have fun while making music and singing with like-minded peers and friends. My hope is that they come back to choir.

We developed a website (www.wakechoirs.com) that will soon be merged with the Music Department website, which answers questions for any student interested in joining us. Wake Choirs are open to every student — undergraduate and graduate — no matter their major, and we have a choir suitable for everyone. I would encourage any student to visit the website to learn more.