Billions of cicadas will emerge this summer

The emergence of Brood X is an entomologist’s Super Bowl, but a nightmare for silence lovers 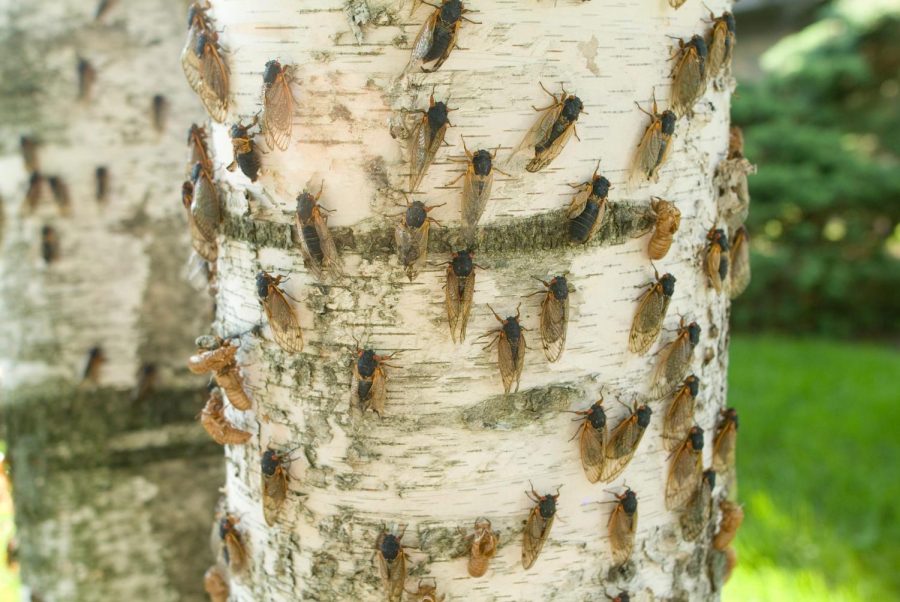 According to scientists, billions of Brood X cicadas will emerge this summer.

Get ready for noise. In the coming weeks, billions of cicadas will emerge across the mid-Atlantic and midwest. This particular group of periodical cicadas, deemed “Brood X” by scientists, has been underground for 17 years.

According to Forbes, after resurfacing the cicadas will make a “mad dash” to nearby trees; shed their exoskeletons; mate for four-to-six weeks and then die, leaving their exoskeletons and remains along the bases of tree trunks.

Periodical cicadas’ song will be similar in tone but much louder. Scientists are predicting their calls could break 100 decibels, a level in between a lawnmower and a rock concert. In 2004, when Brood X last emerged, the Baltimore Sun reported on the daily experiences of living with cicadas: employees at the Baltimore Zoo could not hear each other on their walkie-talkies, gardeners had to wear earplugs and homeowners completely missed the sound of the phone ringing.

“It’s like Harleys,” Marian Farabee, a resident of Columbia, Maryland, told the Baltimore Sun during Brood X’s last emergence. “A few start up, then all of a sudden, they all start up and kind of roar.”

On National Public Radio (NPR), Michael Raupp, professor emeritus of entomology at the University of Maryland, explained the driving force behind Brood X’s periodicity — predator satiation. Cicadas are prey for all sorts of animals, including chickadees, mice, spiders, turtles and meerkats. If periodical cicadas were to emerge in smaller groups, predators would devour the entire brood before they had a chance to mate. When billions of cicadas emerge at once, a small percentage of the brood satiates predators, leaving huge numbers of cicadas to reproduce.

No other brood of cicada will emerge this year — each brood operates on a unique and precise cycle. For example, Brood XXII emerges every 13 years and surfaced last in 2014, per the United States Forest Service. According to Raupp, it is critical that different broods do not come into contact with one another. If brood X and Brood XXII were to encounter and mate with one another, their offspring would be confused about when to emerge and may venture out in smaller, more frequent batches. This would dampen the effectiveness of the periodical cicadas’ predator satiation strategy.

While cicadas may seem disruptive and annoying to the general public, scientists view their mass emergence as an astounding feat of nature.

“For entomologists, this is our Super Bowl, we’ve been looking forward to this,” Raupp said. “It will be a spectacular event.”

John Cooley, a professor in the Ecology & Evolutionary Biology Department at the University of Connecticut, encouraged Americans to change their perspective on the cicadas and appreciate the uniqueness of the phenomenon.

“At this scale, there really isn’t anywhere else on the planet where something like this happens,” Cooley told NPR.