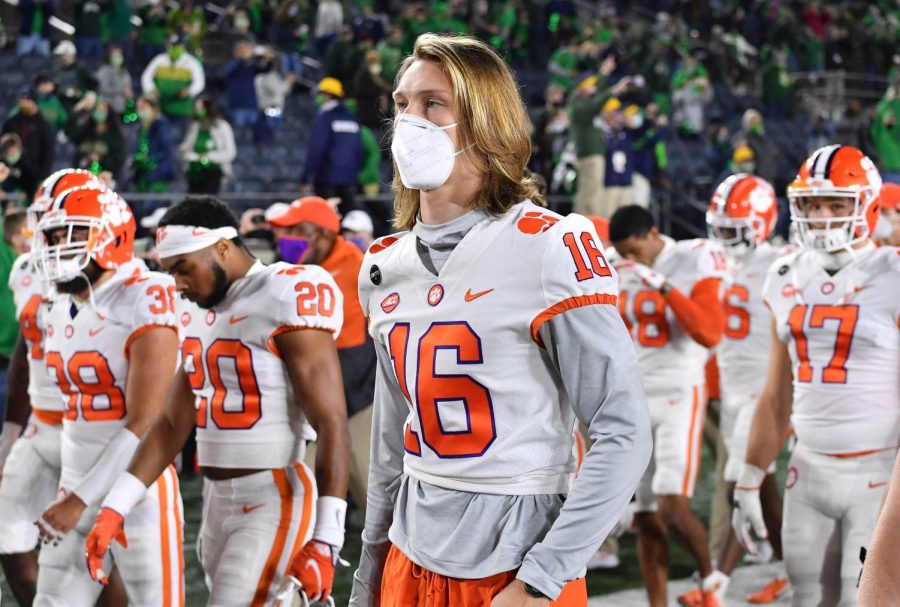 Lawrence has been the projected No. 1 draft pick since the fall.

The 2021 NFL Draft begins in Cleveland, Ohio on April 29 at 8 p.m. and ends on May 1. Now well into the offseason, teams are looking to add young, talented players to bolster their rosters in the 2021-22 football season and beyond. The Jacksonville Jaguars finished with the worst record in football last season, earning themselves the No. 1 draft pick. Who will the Bucs, Jags and the rest of the teams bring to their respective cities? Only time will tell, but here’s our prediction for how the first round will go down.

No surprise here, as Lawrence is far and away the most polished quarterback prospect in this draft class. He has proven himself against top-caliber competition and on the big stage as a top-notch leader, which should translate to his emerging as a day-one starter. Mel Kiper has the Clemson product as the fourth-highest graded QB prospect ever, behind only John Elway, Peyton Manning and Andrew Luck. It will be very interesting to see how he works with former Ohio State coach Urban Meyer.

After trading Sam Darnold to the Panthers, the Jets are in need of a quarterback. Wilson not only fits the scheme, but he has already spoken to three former Jets QBs about what it’s like playing in New York. Wilson shows pocket poise and athleticism and has made tremendous strides as a passer.

The first surprise pick of this year’s draft. Following the 2019 injury to Tua Tagovailoa, Jones took over and shined. He is a pocket passer who set an FBS record with a 77.4% completion rate in 2020. His success with the deep ball is underrated and according to thedraftnetwork.com, “He will need the three P’s surrounding him (playmakers, play-caller, protection) at high-tier levels in order to see his full potential on a consistent basis.”

A former quarterback at Temple, Pitts was asked to give tight end a shot at his college’s summer football camp. He is a monster athlete at 6’6” and 240 lbs and exhibits surprising speed, running a 4.44 in the 40-yard dash at Florida’s Pro Day. Pitts would replace Hunter Hurst and work alongside one of the top WR in football: Julio Jones and Calvin Ridley.

Heisman Trophy winner Joe Burrow’s number one option at LSU, Chase reuniting with his former teammate would be a scary sight. The wideout set the LSU single-season SEC record for receiving yards and touchdowns. Bengals executive Duke Tobin has said that the team believes that the draft isn’t as deep at the wide receiver position as it is on the offensive line, giving him a slight edge in taking Chase over Sewell here.

Many believe Waddle could overtake Chase and Devonta Smith as the first receiver off the board, and given his terrorizing speed and explosiveness after the catch, they may not be wrong. We think he’ll be scooped up by the Dolphins here as they are desperately trying to upgrade their receiving core.

The Chargers will climb up from the No. 13 spot to grab the best tackle in the draft and protect franchise quarterback and former Oregon Duck Justin Herbert. Sewell is quick off the snap and his physical toughness will be key in the run game.

Surtain is a lockdown cornerback with plenty of size and physicality to cover the NFL’s top receiving threats off the line. Against divisional stars such as Michael Thomas, Mike Evans, Chris Godwin, Julio Jones and Calvin Ridley, this is a smart move.

Horn is a perfect fit for the Cowboys, who gave up the most points in franchise history in 2020. He is the son of four-time Pro Bowl receiver Joe Horn and, like his father, is extremely talented. Horn is highly disruptive in coverage but will need to continue to improve his tackling to succeed at the next level. We give him the nod over Farley, who falls mightily after health concerns.

Arguably the top receiver in this year’s draft class, Smith is a perfect fit for the Giants here. He is a route running genius who plays much bigger than his 6’1” size indicates. The Alabama product is sensational in creating separation and fits well opposite Kenny Golladay. He can provide value on special teams as a bonus.

The Bears make a move to grab Lance here and hope he can be their key to make it back to the playoffs, leaving Andy Dalton as a temporary starter. While Lance may need a year to develop, his mobility and footwork are already at the next level. Lance and Tarik Cohen would haunt many defenses.

The Lions trade back here and still get their guy at No.13. Our concern with the Northwestern product is that he opted out of the 2020 college season and may show signs of rust. However, Slater was able to shut down 2020 No. 2 overall pick Chase Young, and if this serves as any indication, he’ll be just fine. His clean and patient footwork will be essential at the next level.

Dalvin Cook will be licking his chops after this pick. Tucker has top-notch athleticism and will be a day-one starter for the Vikings. He played left tackle last season for the Trojans but scouts indicate he could fit better at the guard position.

Bill Belichick gets his quarterback for the future here without having to move up, and he couldn’t be happier. The Patriots attended both of Fields’ pro days and have seen how much potential he has. We see him as the quarterback with the highest upside in this draft class, aside from Lawrence. His effectiveness as a passer is next-level, and he can beat defenders as a runner as well.

At the halfway point of the first round, the Cardinals and Vance Joseph select a cornerback here with the top receivers already off the board. Newsome has the potential to start from day one and has the length and athleticism to pack a punch. His question mark comes down to durability: Newsome has yet to play a full season.

Darrisaw is a steal here at No.17 and will be a staple for the franchise at the left tackle position. He is a dominant blocker and checks every box, both in pass protection and in the run game. The Virginia Tech star has shown growth every year since starting as a true freshman.

With a player comparison to NFL legend Everson Griffin, Paye has a high ceiling. He will explode off the line and use his powerful hands and strength to finish the job. Great pick here.

The Notre Dame linebacker is an ideal match for the Football Team and offers versatility and explosion. He is an ideal three-down defender that can make big plays at high speeds.

Farley has the potential to be the top cornerback out of this draft class, but we have him falling due to his health concerns. The former high school quarterback who began his college career at wide receiver will provide exceptional man coverage skills to the Eagles. If he can stay healthy this is a steal.

Off the edge, Ojulari provides smooth moves and has been picked over Paye by many experts. He is the best available and has a fantastic first step off the line.

Moore is an impact player that fits among the Titans who lost offensive threats in Jonnu Smith and Corey Davis this offseason. A.J. Brown will be ecstatic to be reunited with his former teammate.

Phillips has some health concerns but is worth the risk at the No.23 spot. He is arguably the best edge rusher in this class.

Harris comes off the board as the only running back to be selected in the first round. One of the best running backs in Alabama history, Harris has fantastic size at 6’2”, 230 lbs and great vision.

The first safety off the board, Moerig has outstanding instincts and is a talented ball tracker with soft hands. He needs to work on his open-field tackling and not taking the bait on double moves.

The Browns get an attack-oriented defensive tackle with a big frame and above average quickness. He is a three-down defender that will harass AFC North quarterbacks such as Lamar Jackson and Joe Burrow.

The first of the Ravens’ two first-round picks, Bateman will provide Jackson with another weapon in the passing game. He plays with pro-ready hands and possesses NFL size but will need to become more explosive off the line.

The former high school quarterback, safety and linebacker lit it up as a linebacker at Tusla. At 6’5” and 260 lbs, Collins is physical and explosive. He’s a perfect fit with the Saints defensive scheme.

Toney has a rapid change of direction ability and early acceleration that make him virtually impossible to cover. He battled injuries and missed action in two separate college seasons, however.

Rousseau is a value pick here for Buffalo, and at 6’7”, 266 lbs, he is a wrecking ball off the edge. The downside: he has only one season of college ball on his resume.

Davis has all the qualities to help him succeed at the pro level. With three interceptions and an average of about 10 tackles per game during his year at Kentucky, there is reason for him to be drafted in the first round.

The Bucs aren’t in as much need for player talent as other teams, but Tryon is a strong option for outside linebacker. The 6’4” defender would bring the athleticism and physicality the team is looking for.