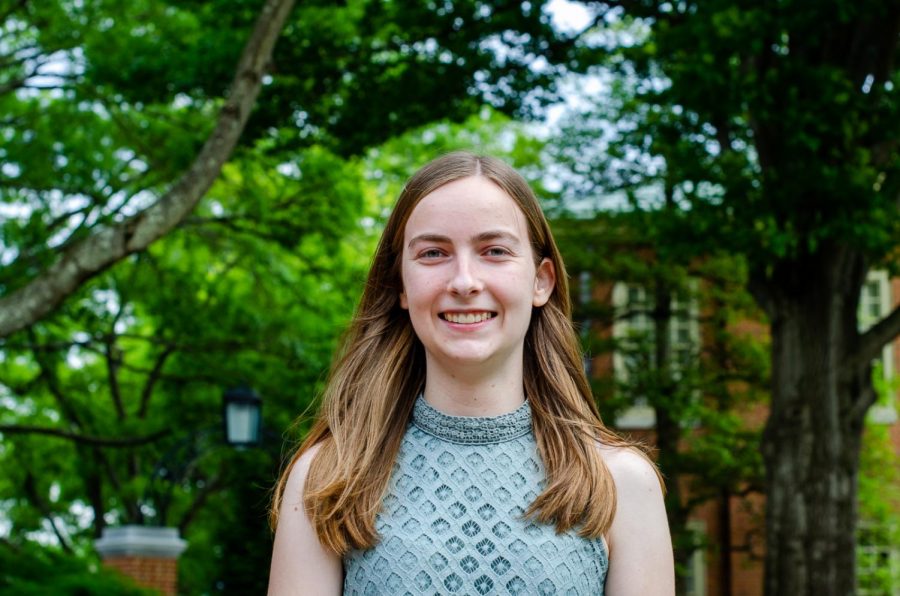 For Madison, Ala. native Anna Flowers, the path to the mathematical statistics major wasn’t a straightforward one.

“I actually came to Wake as a chemistry major,” Flowers said. “I was taking ‘orgo’ and ‘calc’ as a freshman when I realized I wasn’t really enjoying the whole chemistry thing. The ‘calc’ class was hard, but I really liked it, and so I knew I wanted to do some sort of math major.”

Within a few semesters, “some sort of math major” became statistics.

Her experience within the statistics department has been shaped in large part by the relationship she developed with Professor Rob Erhardt — or “Dr. Rob” — who she first met when she enrolled in his multivariate statistics course during the spring of her sophomore year.

“When I first met Anna, I thought she was a senior,” Dr. Rob recounts. “She was a top student in a 300-level statistics class, so it was an easy mistake to make.”

Dr. Rob’s multivariate course spoke directly to Anna’s fascination with the ways in which statistics can be applied.

“The material made a lot of sense to me and so I really enjoyed it,” Flowers said. “We used methods like factor analysis to predict traits that you can’t really measure, like how extroverted someone is.”

During the spring of her junior year, Flowers began working with Dr. Rob on a research project that included predicting and models she was introduced to in the multivariate statistics course.

“I created two different modeling techniques to assess droughts,” she explained. “One model would predict the likelihood of damages to crops based on current weather patterns, and the other model looked at, given there is some crop damage that occurs, how serious and impactful it is going to be. Taken together, the ‘Drought Monitor’ could predict crop damage, [which is important because] unlike with a tornado or other natural disasters, the damage caused by droughts often isn’t as visible.”

Beyond Flowers’ work in the statistics department, music has also had a sizable impact on her undergraduate experience. Not only does Anna have a music minor, but she also plays clarinet and serves as the woodwind captain of Wake Forest’s marching band — the Spirit of the Old Gold and Black (SOTOGAB) — is the musicianship chair of Kappa Kappa Psi — the band service fraternity — and is a Presidential Scholar for Music.

Her roles among these different organizations have allowed Anna the opportunity to participate in all sorts of diverse experiences over the last four years. During her time with the SOTOGAB she’s traveled to cities near and far, playing for and cheering on the Demon Deacon sports teams.

“For the [Pinstripe] Bowl game last year the school flew us up to New York City,” Flowers said. “We also went there during Spring Break of my freshman year for a basketball tournament. The hotel room was provided, we got to stroll through Central Park and I saw a Broadway show, too. It was all a lot of fun.”

With Kappa Kappa Psi, she’s participated in a plethora of events over the years, the most memorable of which took place at Gibson Elementary School.

“It was in the fall, right around Halloween time,” she recalled. “10 or 15 of us were at the door by 7 a.m. and playing as the kids were arriving for school.”

Though her days with SOTOGAB and playing clarinet for elementary schoolers may be coming to an end, another exciting chapter lays ahead for Flowers, who will be attending graduate school at Virginia Tech where she will pursue a Ph. D. in statistics.

“It’s crazy that I’m graduating,” Flowers said. “It doesn’t feel like it has been four years here, but I’m glad to have made it through. [What comes next] is a little bit scary but also very exciting.”

Dr. Rob doubts Anna has anything to fear. “I have every confidence that Anna will continue to excel … next year at Virginia Tech,” he said.