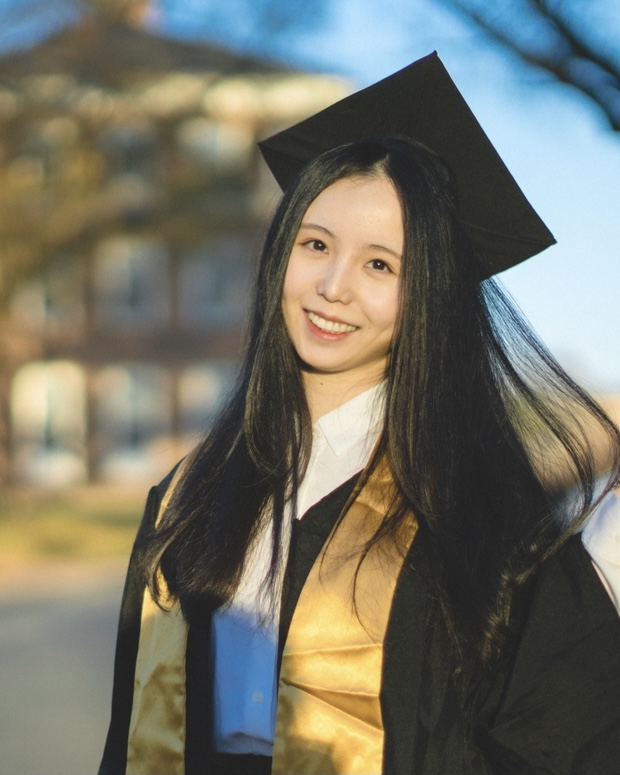 Lily Wang came to Wake Forest from Shenzhen, China. She became interested in attending college in the United States in middle school and decided on Wake Forest for the personalized education it offers.

“I heard that there are lots of research opportunities at U.S. colleges, which is not really the case in China,” Wang said. “The reason that I chose Wake is because it’s a very small school. That was important for me because I wanted the chance to have close contact with professors and many research experiences during my undergraduate years.”

While Wang spent her early semesters at Wake exploring different majors — including biology and business — she has always loved mathematics.

“I’ve been good at math since I was young. It’s something that I’m interested in and also something I’m good at,” Wang said. “I feel like I kind of have this kind of math intuition — I think of ways that you can solve [a problem]. Even [when I become confused], I know what types of methods I can use to solve a complex problem.”

One class that Wang found particularly impactful was a graduate-level class on stochastic processing taught by Kenneth Berenhaut. The class was “one of the hardest classes I took in college;” Wang loved the intellectual challenge and found the subject matter fascinating. She also enjoyed Stochastic Calculus with John Holmes.

“Lily is the strongest student I have taught in the class so far,” Holmes said. “She is exceptionally detail-oriented and careful … her work demonstrates her creativity, work ethic, and ability to work independently.”

Wang decided to declare a second major in computer science to complement her interest in mathematics. She was interested in how computers can be used to approach especially difficult problems.

Internships helped Wang further narrow her academic focus. When she was interested in majoring in business, she completed an investment banking internship. The experience was eye-opening for Wang — she realized that she was not well-suited for a career as an investment banker and wanted to combine her interests in mathematics and business. Wang then interned for Jefferies, a financial services company, doing data analysis.

Wang also partook in research during her time at Wake Forest. She spent her last semester completing her senior thesis in mathematics, Honors Research in computer science and an independent project with a mathematics professor.

Wang’s mathematics research centered around clustering, the mathematical phenomenon in which a group of numbers centers around one particular value.

“For human networks and many other groups of numbers, there are some notes where some individuals are closer than the [rest of the] group,” Wang explained. “So we’re studying those kinds of networks and the relationships within those networks.”

Her computer science research aimed to create a deep-learning model to predict whether a particular patient would become infected with COVID-19 and anticipate the severity of the patients’ symptoms. She submitted a paper summarizing her work for publication at the end of the fall semester.

Wang elaborated on her passion for research: “It feels good when you do research because you [can] make use of what you learn from your classes,” she said. “You get to turn what you learned into an idea and then turn that idea into actual implementation. I like the process because it involves both creativity and practical problem-solving.”

Wang graduated from Wake Forest in Dec. 2020. She accepted a full-time position at Jeffries in New York City, where she works on the technology team doing software engineering.