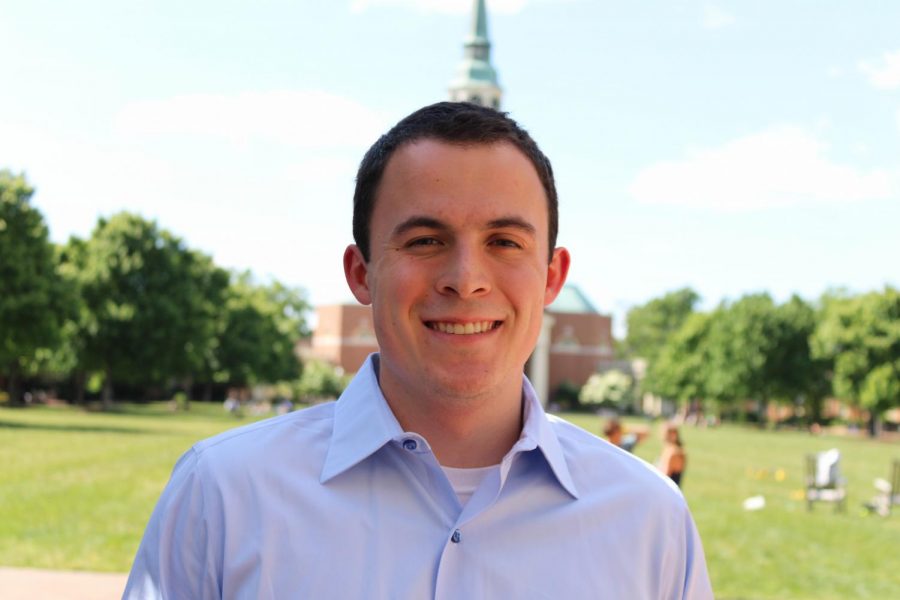 Coming from a small private high school in Warrenton, Va., it seemed as if Kyle Blackburn fit the mold of a small private institution in the South — like a fish that graduates from a pond to a lake. Admittedly, he loved the warm weather of the South, which helped narrow his search for schools. But primarily, Blackburn sought out institutions that were academically challenging and morally upstanding. Not too long into his selection process, he found Wake Forest, applied, and was accepted early in his senior year of high school.

Initially, like most first-years, Blackburn was uncertain about what he wanted to study at Wake Forest. He always had an inclination for the STEM fields, but the fields were vast and diverse, so it was a matter of deciding which path he would take.

Influenced by factors such as Sharon Payne’s information session on the business school and having an advantage in his math coursework, he eventually declared mathematical business as his major.

Still, Blackburn always had an aptitude for biology and medicine, so naturally, he acquired biology and chemistry as his minors.

Blackburn attributes many of his academic successes to the first classes he took as a freshman, especially multivariable calculus with Dr. John Gemmer.

“I got to meet some of the most intelligent people that I’ve ever met, and some of my best friends came out of that class,” Blackburn said. “That was also the most challenging class I’ve taken at Wake in terms of rigor, and that really pushed me in my first year. It really set the tone for the rest of my college career.”

Blackburn also credited Dr. Berenhaut of the mathematics department and Dr. Dalzell of the statistics department as academic mentors that fostered his interest in analytical and statistical math. Additionally, Blackburn has conducted research with Dr. Berenhaut, investigating cluster-based networks through community detection.

Outside of the classroom, Kyle Blackburn is seen wearing many hats and  participating in numerous events. Most notably, he is one of 40 President’s Aides who assist and represent President Hatch at special occasions and donor events. He has been the director of CHARGE for the last two years, a student leadership program designed for first-year students and sophomores. Blackburn is a part of the Athletic Student Leadership Council, a student council committee that focuses on improving fan engagement at sports events. He is also on the Undergraduate Business School Council.

Blackburn is also involved with faith-based organizations such as STS, student-led worship and Catholic apologetics, a discussion group among the Catholic community.

Most recently, he has received the Academic Excellence Award for his major. Along with this prestigious recognition, he was also inducted into multiple honor societies including Phi Beta Kappa, Omicron Kappa Delta, Pi Mu Epsilon for mathematics and Beta Gamma Sigma for business.

When asked about his daily routines and how he managed to accomplish all these feats, Blackburn responded with a simple yet powerful answer: he made sure to get the proper amount of sleep every night. Healthy advice for underclassmen.

Even with four years of academic excellence and successful leadership under his belt, Blackburn shared with us a humble sentiment.

“I am very blessed to have such a loving and supportive family that helped me become who I am today. They always had a really huge impact on me and my success,” Blackburn said gratefully.

After graduation, Blackburn will be taking a gap year working as a research assistant for the University of Maryland Medical School’s surgical oncology department. Following the gap year, he will prepare, apply to and enroll in medical school in pursuit of his long-term goal to become a doctor.