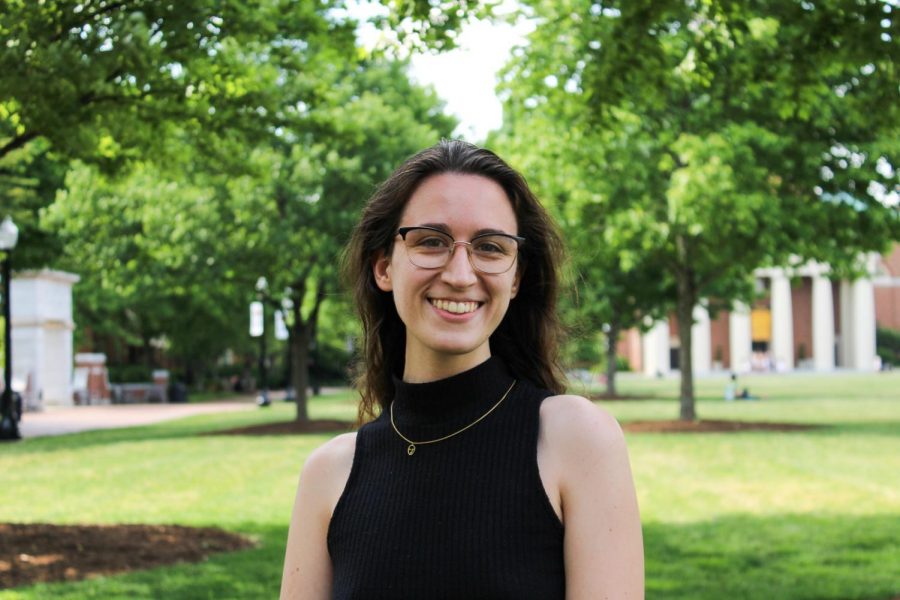 Although Riley Phillips calls Orlando, Fla. home, she spent parts of elementary school and high school living in Germany and took her first German class during her freshman year of high school in Stuttgart. Phillips graduated from an arts high school in Orlando and wanted to pick German back up at Wake Forest, so she started in Dr. Heiko Wiggers’ GER 153 class.

“[Riley] was truly one of the most creative students I have taught,” wrote Dr. Wiggers. “Her contributions were always highly original and very smart. Their Spring 2020 class was interrupted by the pandemic, and I admired how she pulled through these hard times and always strived to improve her German.”

Phillips, a German and studio art double major and an art history minor, has dedicated her undergraduate years to combine those interests. She described the German department as very tight-knit and said the professors are very invested in their students, wanting to know them on a deeper level, socialize with them, and of course improve their conversational German.

“Professors often talk about a student being ahead of their years in maturity, but I have proof! I remember approaching Riley several years ago, assuming that she was a rising senior and asking if she would like to write an Honors Thesis and in her answer, she reminded me that she was only a sophomore,” Dr. Howards said.

Phillips said one of her favorite things about the German department is how supportive they are of the interdisciplinary experience.

Ultimately, Phillips will graduate with Honors in German, and Dr. Howards said, “Finally, after years of waiting, my patience paid off with her fascinating honors study on the evolution of Berlin fashion amid the city’s changing political backdrop.”

In Spring 2019, Phillips studied abroad in Venice, Italy. That summer, Phillips received a Richter Scholarship to research multicultural influences and developments in Berlin’s fashion scene and spent the summer in Berlin, which she said satisfied her with a taste of German during her collegiate career.

While abroad, Phillips embraced street photography as a means of documentation for her research, but when she returned to campus, she curated a solo artist show through the stArt Gallery’s STARTyourself program. The “Seamed|Ripped” exhibition was up in the Student Art Gallery from October to November of 2020 and exclusively featured photos from Phillips’ time spent in Berlin for her Richter research.

Phillips’ German Honors Project was influenced by her Richter research but delved further — examining fashion and youth. She recalled struggling to write the first five pages in January and thinking, ‘I don’t know if I can do this,’ but she made it happen.

“I just submitted 70 pages. I never would have thought that I would do that, […] but, wow, look at this growth from freshman year,” Phillips said.

A candidate for Honors in both German and her studio art, Phillips’ Studio Art Honors Exhibition, “Unmentionables: Confronting Fantasy and Femininity”, showed in the stArt Gallery at the end of April. Outside of the classroom, she has been involved in the art department through public art initiatives such as her performance piece “babydoll” in Fall 2020, multiple contributions to student art shows and her aforementioned solo exhibition. She has also been involved with the Anthony Aston Players and worked as a costume shop assistant for the theater and dance department.

In addition to making her artistic mark on campus, Phillips was a featured designer at Vancouver Fashion Week in October 2019 with her own runway show, and her work has been published in Local Wolves and Mood Fabrics. She was also the cover story photographer for Allen & Houston Magazine. Furthermore, she had an internship pattern-drafting for Sifted Clothing, which was supplemented by her costume shop experience, and started “Finder’s Keepers” with fellow senior Meredith Vaughn, a podcast turned small business selling vintage clothing which the duo plans to continue after graduation.

When Phillips first visited Wake Forest as a junior in high school, the student Art Gallery was one of the first places she went. Although she considered many career paths, her experiences with the gallery managers through her solo exhibitions and honors projects pushed her to apply for the WFU Student Art Gallery manager position, and she’ll begin working at the stArt Gallery in Reynolda Village this summer.