Following Dr. Penny Rue’s announcement to retire, a nationwide search for the next VP for Campus Life begins 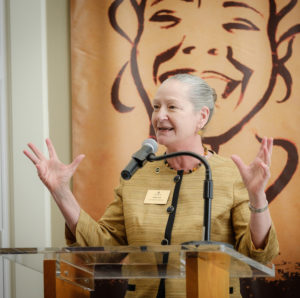 On June 17, Vice President for Campus Life Penny Rue announced her retirement. This came as a shock to some members of the Wake Forest administration, who learned of the news minutes before outgoing President Nathan Hatch sent out the university-wide email.

Provost Rogan Kersh has been tasked with heading the search committee to find Rue’s successor. The committee, which is still being organized, will most likely work throughout the majority of the Fall semester.

“Senior searches for an academic or staff leader at the cabinet or vice-presidential level typically require months — not weeks — to carry out,” Kersh explained.

Because of the timing of Rue’s announcement and the duration Kersh anticipates the search process to take, Rue will most likely finish the 2021-22 academic year in her current position.

Kersh, who was also in charge of the search committee that hired Rue in 2013, commended his colleague’s leadership and impact.

“[During the initial search] I began to talk to provosts, … [university]  presidents, folks in the Campus Library, and we kept hearing, ‘Oh, for you to really understand this field, you need to talk to Penny Rue at [the University of California in] San Diego,’” Kersh said. “Again and again, Penny Rue’s name came up as a source of guidance for this — and at some point, [Nathan] Hatch deserves the credit here — we said ‘What if we tried to recruit her, as opposed to just learning from her?’”

“Her ability to innovate and think creatively about what were the next steps [set her apart],” Kersh continued. “This wasn’t just someone who understood the field fully, but also somebody who could see where it was headed, and somehow. is also able to have very personal relationships. Many administrators are good at [seeing] either what you might call ‘the balcony’ or ‘the dance floor.’ It’s an either-or. The metaphor is, on the balcony, you sit and watch the whole dance and how that unfolds, you have a sense of a field. Or, you are down there with a team, on the dance floor, actually working with the students, in this case, faculty, staff or colleagues. Penny Rue is singularly able to occupy both the high broad comprehensive understanding of a field and build the personal relationships that are so essential to success.”

The characteristics Kersh is searching for are very similar to the talents Rue has displayed during her tenure: a deep breadth of knowledge, an ability to adapt to the ever-changing college campus culture and the aptitude to form strong personal connections.

Kersh admits that it will be difficult to find another “unicorn” like Rue, but the search will be easier because of the solid foundation she has built with her team.