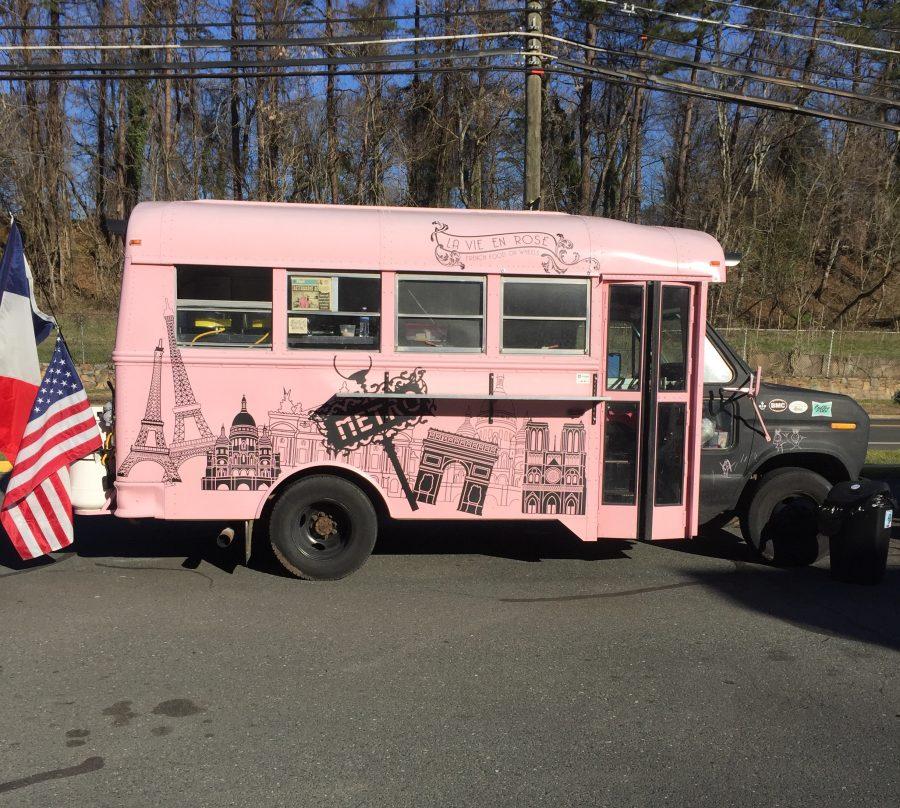 Benedetta Agnoli, an alumna of Wake Forest University, never thought she would have been the owner of a food truck if you had asked about her future plans when she was a student.

She was born in Brazil and moved to New York when she was young, then moved to Winston-Salem in 1977. After attending Wake Forest and graduated in 1995, she went on to Northwestern to study print journalism before living in London for a year. Today, however, she and her husband, Jerome Nicolazo, own and operate a food truck called La Vie en Rose that offers an array of French cuisine — ranging from crepes to ratatouille.

Agnoli and Nicolazo began “La Vie en Rose” last year and have already been drawing in customers from all over North Carolina. They have participated in food truck festivals around the state.

Before they took on the food truck world, Agnoli and Nicolazo worked in industries completely unrelated to food. Nicolazo was a lawyer and worked for an IT company in France. Agnoli worked as a news producer in New York. She moved to Paris after working in production for a few years because she was “thirty, single and said, ‘why not?’ I knew if I didn’t do it then, I never would.”

The couple met in Paris in 2003 and moved to Winston-Salem in 2009 with their two children. Nicolazo became a chef at various restaurants around town, including Wake Forest’s Bistro 34. He began thinking of starting his own business and liked the idea of owning a food truck.

The food truck phenomenon has been sweeping across the United States for some time now — especially on the West Coast. Originally called “roach coaches,” food trucks became known for serving cheap food at construction sites, with an emphasis on volume rather than on quality. La Vie en Rose, on the other hand, strives to create delicious, authentic French dishes that are served from a food truck instead of a stationary restaurant.

“Jerome started talking about buying a food truck and then the next thing I knew there was a huge truck sitting in the driveway,” said Agnoli about the beginnings of La Vie en Rose.  “And that was it. It’s been our lives ever since.”

As a native of France, Nicolazo grew up with French food being a large part of his life. French high schools teach culinary classes in their curriculum, so he was exposed to French cooking from an early age.

His family is from the south of France, so he loves southern French cuisine in particular, which shows in his food.

One of the signature southern French dishes of La Vie en Rose, and Nicolazo’s personal favorite dish, is the ratatouille.

Agnoli’s favorite dish and a La Vie en Rose special is the salmon quiche, which is made with fondue and a variety of flavorful herbs. Nicolazo’s favorite dish to make is the boeuf bourguignon — a beef stew slowly cooked in red wine with an added secret ingredient.

Some other La Vie en Rose favorites are the sweet and savory crepes, the rose water flavored crème brulee and the French Monkey — which is made with caramelized bananas, nutella and cocoa powder.

The menu for La Vie en Rose undergoes a few changes based on the foods of the season. Fresh and locally grown veggies are a staple of La Vie en Rose dishes, so the menu is adapted and features the flavors of each season. Agnoli prepares the ingredients and Nicolazo manages the cooking. Together they have brought authentic French cuisine to the area via La Vie en Rose.

Though French food and cooking are two of Nicolazo’s passions, both he and Agnoli enjoy the food truck work environment. By working in a food truck “you can express yourself in your cooking,” Nicolazo said. “There’s a freedom to my work that I love.”

The two of them have worked in environments very different from that of the food truck, so they recognize what a fun and unique opportunity it is to have the independence afforded to them through running their food truck.

The freedom and creativity inherent in running La Vie en Rose is a special part of La Vie en Rose, and another highlight for Nicolazo and Agnoli is the people in the food truck community at large. The enthusiasm from the general public and other food truck owners alike has made the experience worthwhile for the couple. “There’s a really big food truck community in Winston-Salem,” Agnoli said. There are lots of festivals and people who want to be involved.” “We’re really lucky to be somewhere where people are so supportive and love food trucks so much. It’s been an amazing experience and we’re excited for the future of La Vie en Rose.”

In less than a year, La Vie en Rose has transformed from an idea, into a functioning food truck due to the hard work of Agnoli and Nicolazo. It has begun to make a name for itself in the food truck community and has already brought the authentic and classic cuisine of France to many North Carolinians.