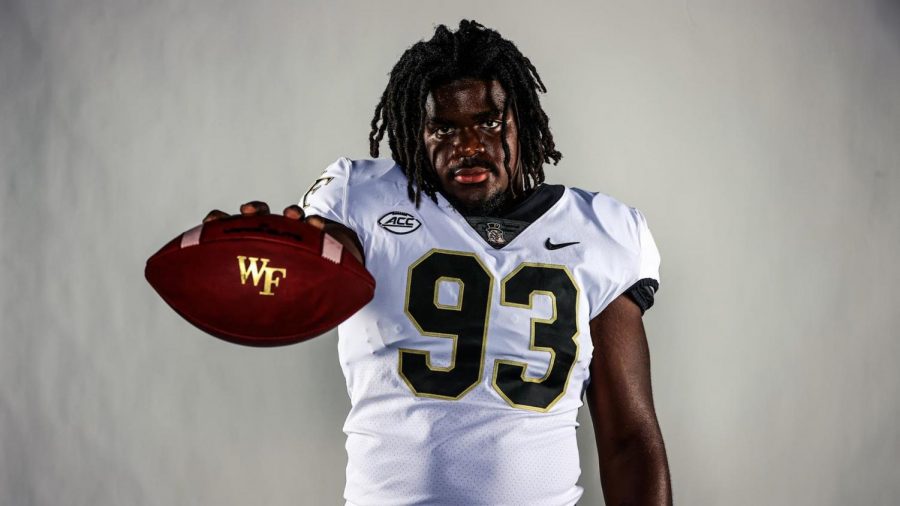 Chaney finished his senior high school season with 13 tackles, 2.5 tackles for loss and 1.5 sacks. He had 25 tackles, three sacks and a fumble recovery as a junior in 2017.

Redshirt sophomore Isaiah Chaney has more to offer to the Wake Forest University community than just his football talents. The Cartersville, Ga. native discovered a passion for football in high school; there, he was a team captain and consensus three-star athlete. Chaney was a member of a Cartersville senior class that won 55 games in their four years and was a standout defensive and offensive weapon. During his time at Wake Forest, Chaney has tallied six game appearances. He also has a strong presence off the field, as he works tirelessly to give back to the community he grew up in.

Christina DeNovio: At what age did you start playing football?

CD: What else did you do growing up?

IC: I played basketball just to keep myself active. My best friends were playing and that’s how I got into it. I actually was a heavy video-gamer growing up. I didn’t think I was gonna go to college for free or go to college at all. I thought I was just going to work and play video games my entire life. Basketball — I didn’t really have any love for it, it was just something for me to do.

CD: You come from a big family. Did this ignite your competitiveness?

IC: Yeah, especially with my little brother, he was a big sports player growing up. He used to play football, baseball, basketball, soccer. Him having that competitive drive made me want to have the same competitiveness. So really, he was the one who influenced me to start playing football because it was a more physical sport than basketball.

CD: What made you stick with football, and when did you realize you loved the game?

IC: The thing that probably made me stick with football is the extended family aspect of it. Where I’m from, we’re a big football town. Even though we’re a small city, it’s literally run by football. The school was in the middle of downtown Cartersville. People would come from around town to come watch our team play. So I was surrounded by football. The kids loved us, the parents loved us. So just the family aspect really made me stick it out. That was actually a reason why I quit playing basketball — because there’s not a lot of players. You’re not able to meet a lot of different families. Playing football, there were like 115 or 120 of us. Being able to meet their families and spend time with them really made me want to see it through. And then, around my junior year, I truly began to love football — even though I had scholarship offers and stuff like that, it still took me a while. I’ll probably say after making my first big hit my junior year is whenever I fell in love with the game. Seeing the crowd’s reaction when you make a big play or something, I really loved that feeling. And so I was looking forward to many more moments of that feeling.

CD: What position(s) do you play and how did you land in those roles?

IC: I play defensive end and defensive tackle now. When I first started playing in high school, I was a tight end. My high school head coach told me to try defensive and that I’d have a better future there. I didn’t believe him at first, but after I switched over, I started getting a bunch of offers at a couple of colleges. I continued playing tight end a little bit through high school, but defense was my main priority.

CD: How would you describe yourself as a teammate?

IC: I like to give advice to the young guys to make sure they know what they’re doing sometimes. I pick up on plays pretty quickly, I’m just now starting to play defensive tackle this year. Now, I meet with my coach once or twice a week to go over the new position. I feel like I picked up on it pretty fast.

CD: Can you talk about your major and future plans?

IC: I actually wanted to go to school to pursue a business entrepreneurship degree. My grandma runs a cleaning business, and I wanted to take it over one day. But then I realized I wanted to give back to the community in any way I can, so I switched my major to elementary education. With that, I could give back by teaching and coaching.

I’d really love to give back to my hometown community. I’ve started working with little kids. Over the summers, there’s a freedom school program — it’s a bunch of African American, under-the-poverty-line students who are on Wake’s campus. They’ve been there for a couple of years, and nobody really noticed them or anything like that. So, once or twice or three times a week, a couple of the football players and I would read to them and just hang out with them for the whole day. They’re in Carswell Hall from around the end of May to the beginning of August, just about Monday through Friday, from about seven in the morning to three in the afternoon.

CD: What areas do you think the team will be strong in this year?

IC: I would say we have a bunch of depth this year. We have to give the young guys a chance to show what they have, and what they’re worth.

CD: Who is your biggest inspiration when you’re playing and practicing?

IC: One person I think of is my great-grandmother. She passed away in 2014. She was never able to see me play, but she was a huge inspiration. And she had 12 kids. Like I said, My family was pretty big. She paved the way for all 12 of her children, and I want to do the same thing. Another person I think of is my Fafa, he was such a fighter. He just passed away this year in January. He always told me to keep playing and to get out of my home state, make way for my family.

CD: Can you describe your relationships with your coaches?

IC: Coach Cohen, he and I have a pretty good relationship, we’re both very open with each other. He’s always there to talk to me, whether I’m performing poorly or well. I’ve come to him with everything, with any issues that I’ve had, even outside of football life. He’s a very caring coach. After my first surgery, he was the first person I saw. He showed up at my house and made sure that I was good. He called me just about every three hours just to make sure I was okay. I really love my coaches back at home, too. They set me up to be in the position where I am now. I still talk to most of them, even though I’m up here, they call me to ask how I’m doing. So I will say I have very loving relationships with all my coaches.

CD: Do you have a favorite NFL player who served as an inspiration to you?

IC: Growing up, the players that I liked watching the most were Troy Polamalu and Ray Lewis. Even though they don’t play the same position that I do, they had a bunch of love for the game. I loved to see how energetic they were, every time that they hit the field. I always thought, if they can do it, anybody who puts their mind to it can do it as well. Growing up, I loved watching the Ravens, especially watching Ray Lewis come out of the tunnel and do his thing.

CD: Do you have any pregame rituals?

IC: I walk the field, say a prayer at the 50-yard line, then walk back. I know it sounds weird, because I’m gonna sweat, but I normally take a shower before the game. I really don’t like to have a sticky feeling before I put my shoulder pads on. So I’ll take a shower and turn on some music. I’ll send my mama, my grandmama and my siblings text messages and they’ll wish me good luck.