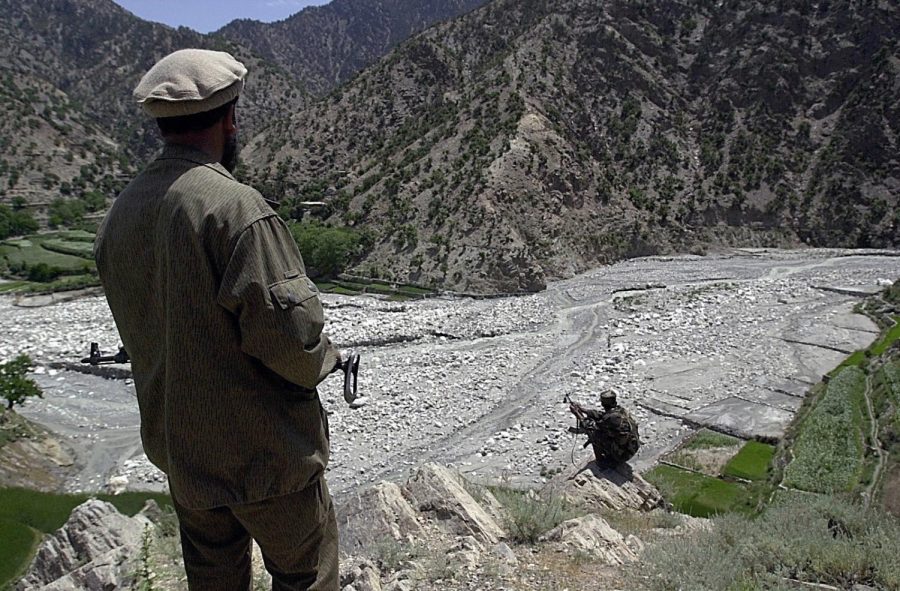 Members of the Afghanistan Military Force (AMF) stand guard over the town of Markhanai, watching from a hilltop.

America’s rapid withdrawal from Afghanistan leaves chaos in its wake. Numerous media outlets have been scrambling to cover the situation in the capital, Kabul, as Afghans desperately attempt to leave the country. All of this turmoil has sparked intense discourse amongst Americans as to what the government should have done to mitigate the current disaster. However, considering the fact that American troops have been fighting this war for two decades and still have essentially nothing to show for their efforts, it isn’t entirely clear what measures American forces could have taken in order to protect the citizens of Afghanistan and prevent the Taliban’s forcible takeover of the country.

In 2012, then-president Barack Obama stated that the U.S. would no longer be in the business of “nation-building” in Afghanistan and that his government would “focus on nation-building here at home.” Nevertheless, the practice continued in Afghanistan for the majority of Obama’s time in office. The truth is, it was extremely easy for American forces to drive out the Taliban from most of Afghanistan and forcibly gain control over the country — such was accomplished less than a year after the official beginning of the war.

The bulk of the approximate $2 trillion (Brown University, 2019) spent on the war was utilized in rebuilding and defending what became known as the Ring Road — a major highway in Afghanistan that connected its’ main cities, including the capital, Kabul. Due to the population of Afghanistan consisting primarily of disconnected and isolated tribes and communities — and coupled with the fact that the road was essential to the country’s ability to trade as the only land route connecting South Asia and Central Asia, the reconstruction of the road was vital. The roadway needed to be functional in order for American forces to be able to stabilize the country socioeconomically.

However, the complete lack of foresight on the part of the United States government meant that the billions of dollars that went into rebuilding this road would soon go to waste. For one, they didn’t re-establish the Afghan Ministry of Public Works, an organization that was recently forced to let go of hundreds of employees due to corruption charges. The ministry was just as corrupt back in the early 2000s — the same Ministry was in charge of conducting maintenance on and guarding the Ring Road and it was almost too easy for the Taliban to concentrate their attacks around the road and destroy it. In addition, the beginning of the war in Iran in 2003 meant the U.S. had to put their efforts in Afghanistan on the back burner, cutting reconstruction funding by billions of dollars in just a few years. Their lack of attention to the issue further emboldened the Taliban, who were then able to regain control of most of the country by 2006.

However, the U.S. could no longer afford to revive its efforts in Afghanistan. By 2010, the U.S. was already $13 trillion in debt, a number which has only risen over the years, amounting to approximately $30 trillion today. Moreover, the coronavirus pandemic took precedence in 2020, and Congress passed the $2 trillion CARES act. The U.S. just didn’t have the money to spend on a foreign war anymore.

While it’s evident that the U.S. had to withdraw from the Afghanistan war, the fact remains that the bedlam that followed this withdrawal was almost wholly unnecessary and was perpetuated by the governments of four presidents.

Firstly, many Americans, including U.S. government officials, are quick to blame the army in Afghanistan. Over the course of the war, the U.S. spent $83 billion equipping and training the Afghan army. What they failed to realize is that simply throwing expensive weaponry at the Afghan military would not make them better fighters. The U.S. inadvertently created an army that was so dependent on American forces — airstrikes in particular — that when the U.S. refused to provide more air support, the Afghan army simply stopped fighting. Instead, they began handing over territory to the Taliban and offering no resistance.

In addition, American forces refused to acknowledge — and by extension take action against — the intense levels of corruption within the Afghan political and military systems. In neglecting the re-formation of the Ministry of Public Works, the U.S. government failed to address the fact that the supposed army of 300,000 men in Afghanistan also contained the names of thousands of soldiers that didn’t actually exist and who were only enrolled so that the other Afghan military officials could multiply their own pay. Simultaneously, the extent of the corruption meant that actual existing soldiers were also not receiving resources, food or any kind of reimbursement for their efforts — this demoralized Afghan soldiers to the point of desertion, further weakening the army.

Lastly, the fact that former President Trump’s government actually validated the Taliban as a legitimate organization, and that President Joe Biden continued that validation, speaks volumes about how dedicated American forces were to actually eliminating the terrorist organization as a threat. In 2020, President Trump actually sat down with the leaders of the Taliban in a negotiation that produced the February 2020 deal (as a result the U.S. agreed to withdraw from Afghanistan by May of 2021). Despite the Taliban constantly violating this agreement (refusing to renounce Al-Qaeda and continuously harboring terrorists among many other infringements), Biden used it to justify his rapid withdrawal from Afghanistan, essentially stating that he was following a deadline set by the very forces the U.S. originally set out to destroy.

Ultimately, there is not much the U.S. can do to help Afghanistan at this point. The Taliban takeover has been prompt and little resistance has been offered. Simply put, the government cannot afford to pledge another trillion dollars toward efforts in a foreign country while the U.S.’s own economy is just beginning to recover. At the end of the day, the war in Afghanistan the subsequent withdrawal and the Taliban takeover have revealed too many cracks in the U.S. efforts concerning the war on terrorism, flawed foreign policy measures, and failed humanitarian efforts.