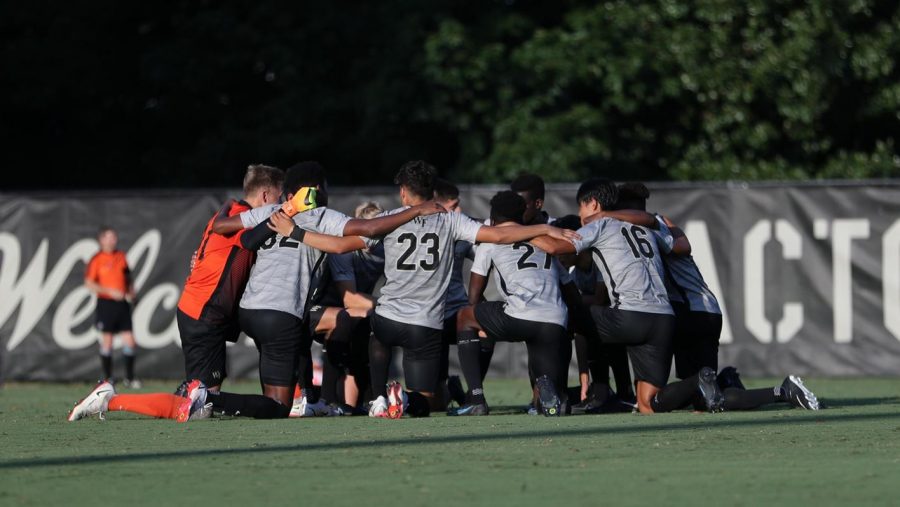 Under the lights in a packed and raucous Spry Stadium free of capacity restrictions, Wake Forest faced off against Coastal Carolina in the Demon Deacons’ second and final exhibition game.

Just over three months ago, the Demon Deacons played the Chanticleers in the first round of the NCAA tournament. Junior midfielder Omar Hernandez scored twice in a hard-fought and tension-ridden 3-2 win. Wake Forest would go on to outlast Kentucky before losing to North Carolina in the Elite Eight. On Aug. 21, two Coastal Carolina goals were enough to beat Wake Forest in the final warmup match before the start of the regular season.

The Deacons began their exhibition slate by overcoming Furman 2-0 in their first preseason fixture. Sophomore midfielder Chase Oliver scored just minutes into the second half, and Hernandez scored off a trademark free kick to seal off the game with only six minutes remaining.

Most importantly, the exhibitions showed off Wake Forest’s dazzling collection of first-year talent — the class was given the distinction of TopDrawerSoccer’s No. 1 recruiting class of 2021. Freshmen Nicolas Mancilla, Tareq Shihab, Roald Mitchell and Leo Guarino started against Furman, while Babacar Niang started against Coastal Carolina in a more veteran-heavy starting eleven.

Throughout the first half, Niang starred as Wake Forest dominated possession and produced numerous scoring chances. Even so, they repeatedly came up short in front of goal. Starting in the middle and drifting out wide, Niang darted at defenders while continually making himself open for the ball. He orchestrated the plays with Hernandez, who was operating much deeper than he does in his normal attacking midfield position. Senior forward Kyle Holcomb had a series of chances, including a close-range opportunity that forced a spectacular diving save from the Coastal Carolina goalkeeper, Leon Schmidt.

Despite the heavy pressure, it was the Chanticleers who struck first in the 32nd minute on their first meaningful opportunity of the match. Throughout the battle, Coastal Carolina’s deep sitting defense and resolute goalkeeping frustrated Wake Forest, who failed to score. The Demon Deacons recorded seven shots on goal and 10 corners. Coastal Carolina struck again in the 72nd minute on a counterattack that broke through Wake Forest’s high pressure.

A particularly tense moment occurred when an errant Coastal Carolina backpass forced their goalkeeper to rapidly charge to clear the ball away from an onrushing Niang. Seemingly nicked by Niang’s trailing leg, the keeper collapsed in a heap while play continued, ultimately provoking a Coastal Carolina player. Both teams registered a collection of yellow cards, with hard fouls and late challenges aplenty in a game carrying more emotion than a normal exhibition match. This was clear based upon Coastal Carolina’s goal celebrations, which included their goalkeeper sprinting across the field from his box.

A series of foul calls in the dying minutes provoked the crowd, players and coaches, ultimately bringing an end to a frustrating evening for the Demon Deacons. The atmosphere remained, however, with a packed Spry Stadium cheering on Wake Forest until the final whistle.

The sole player to play the entire match for Wake Forest was junior Nico Benalcazar, who started on the right before moving to his normal position in the center at halftime. Hernandez also played a number of midfield positions throughout his seventy-eight minutes on the field.

The Demon Deacons begin their regular season against Virginia Commonwealth University on Aug. 26 at 7 p.m. They hope to build off an NCAA tournament run reliant on young talent, who, luckily for Wake Forest, are now more accustomed to the college game, and primed for success.