The win vaults Finau up to the No. 1 spot in the season-long points rankings 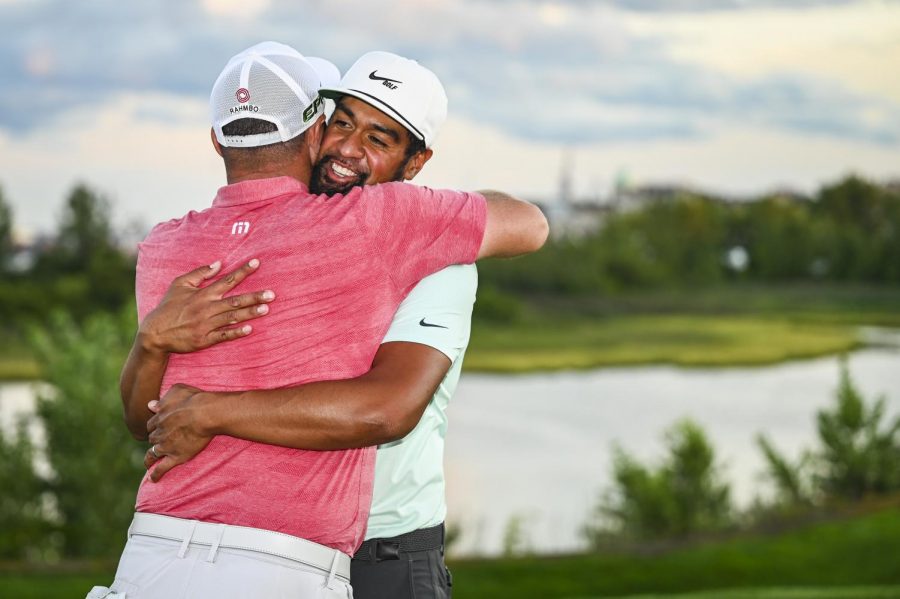 Jon Rahm embraces Finau after his win in the playoff against Cameron Smith. With the third place finish, Rahm moves to second in the rankings.

On Monday, Tony Finau did something in Jersey City, NY that he had not done in 1,975 days — he won a golf tournament. Since turning pro in 2007, Tony Finau has become popular for his powerful swing and his laid-back demeanor. Finau is one of Nike’s top golf athletes and is one of the longest hitters on TOUR with an average driving distance of 305.4 yards this past season.

Considering Tony Finau’s immense talent and popularity among golf fans, many expected him to claim his fair share of trophies early on in his career. Since his initial TOUR win in 2016 at the Puerto Rico Open, Finau has become a familiar face on the first page of leaderboards and is always in the mix during the biggest tournaments of the year. However, before Monday, he had been unable to get over the hump and capture a second victory on the tour.

According to ESPN, in the five years since he won in Puerto Rico, Tony Finau had 40 top-10 finishes and eight second-place finishes. Over that span, many folks in the media began to question whether or not Finau would ever be able to end his winless drought.

Finau carded a six-under-par 65 in the final round, which was the low round of the day among the field. His spectacular round featured a back-nine surge in which he lit up Liberty National Golf Club with three birdies and an eagle. He came into the clubhouse at 20-under-par for the tournament.

Several groups behind Finau, Cameron Smith battled his way to a final round 67, which tied Finau at 20-under. After 72 holes, two players remained, and a sudden-death playoff was necessary to determine a winner. The playoff took place on the No. 18 hole at Liberty National, and an errant tee shot from Cameron Smith allowed Finau to make a routine par and capture the crown.

When asked about his winless drought, Finau remarked, “It’s been a long time since my last win … It’s been a blessing in disguise that I’ve had to wait this long, because I’ve polished my game to a place where I think I can start to win more often.”

One of the most formidable opponents that Tony Finau had to overcome was unexpected and unpredictable: the weather. Late Sunday afternoon, Hurricane Henri swept across the Northeast and dumped nine inches of rain on Liberty National Golf Club. With the entire course practically underwater, the final round of the tournament was pushed back to the following day when conditions would be more manageable. Even with the extra day, the course was still waterlogged and was only playable because of the grounds crew at Liberty National Golf Club, who worked overnight to dry the course out as much as possible.

In addition to creating more difficult conditions on the golf course, Hurricane Henri imposed a great mental challenge on the players at the top of the leaderboard. Like icing the kicker in football, the tournament’s delay of the final round allowed for even more pressure to weigh on the shoulders of Jon Rahm, Cameron Smith, Justin Thomas and Tony Finau. Instead of carrying on the momentum from Saturday’s round, the hurricane forced players to stay inside all day Sunday, leaving thoughts of Monday’s round to ruminate in their heads.

When asked what he would do during Sunday’s storm, Finau responded, “A lot of Netflix and reading and eating.” Finau also noted that his hotel room had a “nice smooth piece of carpet to roll putts on.” The putting practice certainly paid off on Monday. Finau drained a number of birdie putts and a clutch par putt on the 72nd hole to lock up the top of the leaderboard at -20.

Going into this week’s BMW Championship, Jon Rahm is the heavy favorite after being on the first page of the leaderboard in yet another tournament. With one win and thirteen top-10s this season, Rahm has been a dominant force on the tour and is almost certain to be in the mix on Sunday. Other favorites include Justin Thomas (who finished tied for fourth last week) and Finau, who is looking to continue his stellar play going into the second round of the FedEx Cup playoffs.