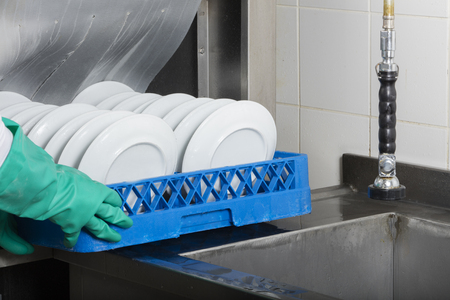 Over the summer, I worked here and there in a local kitchen as a dish boy. It was not a real resumé builder by any means and the pay was nothing to write home about. The only perk that came with working the $8 an hour job was that I was able to get lunch or dinner for free, whenever I liked. Considering I never really cook and order take-out way too often, that free food was a nice perk ,and one I took advantage of often.

My primary station was in the elbow of an “L” shaped metal trough of sorts that led to an industrial dishwasher. I would open it up, slide in the tray of dishes and close the door to activate the cleaning sequence without needing to press a single button. In all honesty, I slowly fell in love with this machine. It could do a whole load of dishes in less than two minutes! I was continually impressed by the way in which this device was so much more efficient than the average home dishwasher. Apparently, they are alarmingly expensive to the point where most restaurants rent them. Otherwise, I would absolutely try and get one in my own home someday.

At the end of the shift, we would finish drying off all of the dishes and rack them before beginning to shut down the shiny metal kitchen for the night. One of the primary duties for which I was responsible was that of cleaning, sanitizing, rinsing and, finally, squeegeeing the surface to remove all excess liquid before drying. It was during this penultimate act that I was hit with an interesting nugget of wisdom that I would not have anticipated receiving as a dish boy.

The night was ending. We had been running late and I was in a hurry to get out the door. I was hurriedly drawing the long plastic blade across the iron “L.” The water was flying everywhere and it felt like I was making no progress in removing the liquid from the surface. I began to grow quite frustrated.

The head chef then walked over and said,“Cap, if you just go a little slower you’ll move more water and not have to go over the same surface so many times.”

He then proceeded to finish my job in a deliberate manner that put my flustered effort to shame. His words resonated with me for the rest of the night because they seemed to have implications that reach far beyond the art of squeegeeing. Simply put, he reminded me that slower can be better.

Similar to the tortoise and the hare, the chef’s words seem to be especially relevant in regards to the beginning of the school year. As we all encounter various tasks inside and beyond the classroom, we should not be afraid to be calculated, focused or even slow in our actions. There is a real tendency within most people to rush through our duties in order to feel as though we are being as efficient as possible. While efficiency does have its place, we can’t forget that the best approach is sometimes that which might at first seem to be the most difficult or time-consuming.

Compare squeegeeing and reading, for example. It is tempting to complete both of these tasks by quickly skimming either over the water or the text. I have found, however, that by giving just a little more time to either the stroke or the word, I gain a lot more.

As this school year kicks off, I would like to encourage the reader to consider parts of their life in which they are currently rushing and could slow down. I can guarantee you that in doing so, you will be surprised by the degree to which your performance is enhanced.