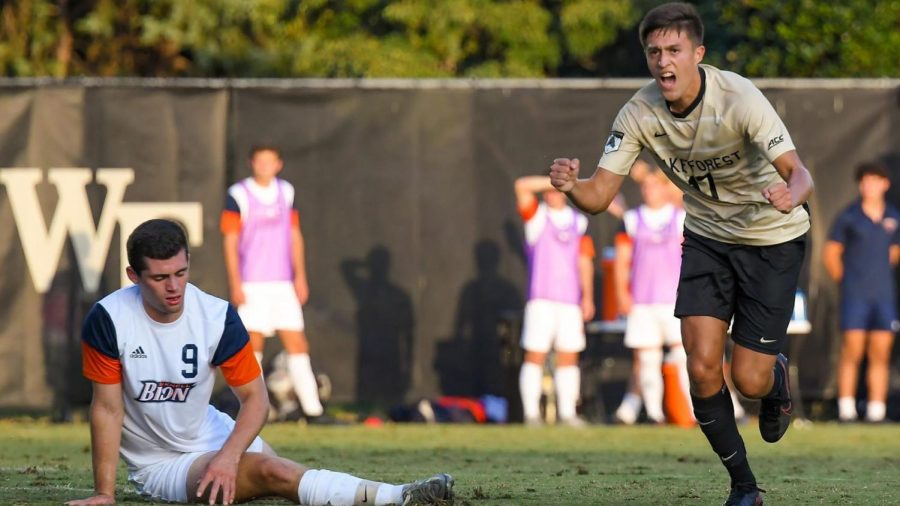 After a frustrating season opener shutout loss to Virginia Commonwealth University, Wake Forest men’s soccer returned to its winning ways with a resounding 2-0 victory over Bucknell on Sunday night.

Still dealing with the loss of three-star attackers following the Fall 2020 season, Wake Forest struggled to score in both their final preseason exhibition and their match against VCU. In both games, they failed to penetrate the defensively oriented competition.

One game prior, the Demon Deacons toiled for 90 minutes under the lights of Spry Stadium against the Rams of VCU to no avail. Crossbars, posts, the outstretched glove of a diving keeper all denied Wake Forest. The Deacons recorded twice as many shots on goal as VCU, but remained unable to score. The two goals they conceded in the first half proved an insurmountable deficit.

In his postgame notes, Wake Forest head coach Bobby Muuss remarked on the quality of the VCU defensive scheme and their devastating counter-attacks.

“VCU did a really good job at times breaking us, but were really organized when they were really, really deep,” Muuss said.

After VCU’s Celio Pompeu was sent off for his second yellow card offense, the Rams resorted to an ultra-defensive style with little-to-no offensive mindset. They were able to stifle the Deacs and force shots borne from desperation rather than from quality build-up play.

The script was flipped against Bucknell, with the match largely impacted by the return of junior Jake Swallen (who did not dress for either the exhibition match or the season-opener). Working brilliantly with Omar Hernandez, Swallen floated between the lines and played a series of give-and-go’s that opened up space for senior striker Kyle Holcomb, who was making his 30th career start for Wake Forest.

Holcomb dropped deeper during attacking sequences, receiving the ball in stride and charging at defenders, creating an opportunity for junior David Wrona. His shot was saved, and moments later, Hernandez hit the woodwork.

Shortly thereafter, Holcomb received the ball some forty yards out and dribbled towards the Bucknell backline before laying the ball off to Herandez, who instinctively cut to his favored left side and powered the ball into the far corner of the goal beyond the reach of the Bison’s keeper.

Hernandez has proven instrumental in the past season and a half, growing from a setpiece specialist who seemed uncomfortable with the ball at his feet to perhaps the Demon Deacons’ most accomplished attacking midfielder.

Working alongside Swallen, Hernandez was at his best when working with fellow junior Takuma Suzuki, anchoring the midfield and disrupting Bucknell’s counterattacking opportunities.

After his opening assist, Holcomb got on the scoresheet with 38 minutes left.

Swallen, once again involved, received a line-breaking pass from sophomore center back Prince Amponsah and deftly touched it into the stride of Holcomb. The senior striker maneuvered around the Bucknell defender and calmly placed the ball past the keeper to double the Deacs’ lead.

The strike was the 22nd career goal for Holcomb, who has blossomed into the undisputed leader of Wake’s attack. Holcomb led the team in goals last year with nine, matching his goalscoring record from the previous season, in which he earned a third-team TopDrawerSoccer Best-XI selection.

Sitting on a two-goal lead, Wake Forest held possession and gave playing time to bench players whose progression will be crucial down the road. Freshman Tareq Shihab deputized Suzuki in both halves. The former member of Premier League side Brighton’s academy added his name to a long list of midfielders vying for playing time.

The Demon Deacons concludes their opening slate of home games Sept. 4 against Cornell, who enter the season ranked second in the Ivy League. The Big Red did not play last season due to the coronavirus pandemic, and, as a result, more than half their players have yet to see collegiate action.