Marvel Studios branches out with “What If…?” show 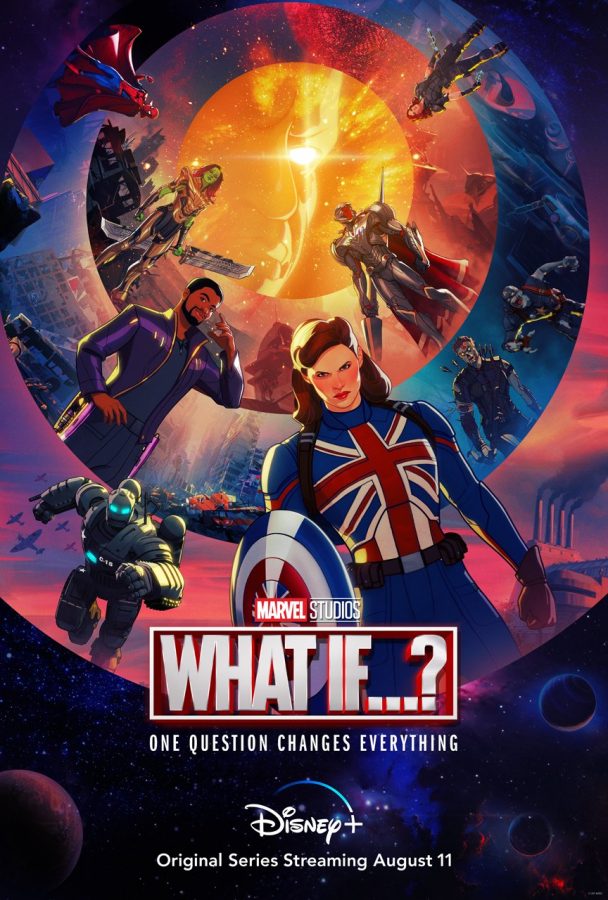 "What If...?" is set in the MCU but is told through an animated lens.

This past summer, a lot of action took place in the world of streaming services. For many, being able to escape into the multi-dimensional world of media has kept us sane these past several months. The shows and movies within distract us from the incessant thoughts of the opportunities we missed out on due to the pandemic. But rather than mourn for what realities aren’t ours, a new series from Marvel Studios takes a different approach. Aptly titled “What If…?”, the series explores and celebrates a myriad of stories that deviate from those of the beloved film franchise.

Before Marvel reached this point in their storytelling, quite a bit of foundation had to be laid down. As seen in the finale of another summer TV series titled “Loki” (spoiler warning ahead), Sylvie — a variant of Loki — made the critical decision of slaying Kang. In doing so, she set free the endless branches of timelines that Kang had spent an eternity suppressing. Once again, the god of chaos has set in motion a cascade of events for the Marvel Cinematic Universe.

It was this action that gave birth to the premise of “What If…?”. In the series, each episode focuses on a change of one single factor from any movie within the MCU. The audience gets to revel in the consequences of these changes and the effects they have on different characters.

Adding another layer of thrill to this project is the fact that this series is animated, setting it apart from the previous live-action films and shows of the MCU. This medium of visual storytelling bears a close resemblance to the iconic settings, moments and characters of the movies. At the same time, it also pays homage to the aesthetics of the comic lore from which the entire Marvel franchise originated and is largely still inspired by. This is due, in part, to the stellar effort that the animators, producers and voice actors put into the series.

As of now, three out of nine episodes for the first season have been released. Already, viewers (myself included) have been left amazed at Captain Carter’s strength and efficiency, the observed potential of the Tesseract, T’Challa’s benevolence towards an entire galaxy, the beautiful tribute to late actor Chadwick Boseman and how quickly a critical initiative falls apart at the hands of a once well-meaning but now vengeful character. There is still far more to witness, and I await impatiently with anticipation.

However, the anticipation surrounding this show doesn’t concern the episodes’ contents. As has been confirmed by Loki’s conclusion that “What If…?” is considered canon within the MCU, many fans are wondering if and how these episodes’ alternate versions of characters and storylines will tie into the main films they know and love.

To feed this flame, the recent release of the long-awaited trailer for “Spider-Man: No Way Home” has dropped even more hints of a multiversal story at play. Such can be found in the appearance of Alfred Molina’s Doc Ock and the sound of Willem Dafoe’s laughter as the Green Goblin. These classic villains — among others who also made brief indirect appearances — had only appeared in other iterations of Spider-Man films, indicating that a sort of merging of different realities will occur.

Another major clue that the multiverse will come into play is the fact that another upcoming Marvel Studios film is titled “Doctor Strange in the Multiverse of Madness”. In addition, the fourth episode of “What If…?” involves a malevolent version of Doctor Strange, who might be involved in both of these movies. It would make perfect sense to believe that the series is acting as the forerunner for these future films by providing alternate settings, settings we may likely have not seen the last of.

The only downside to this new series is that to fully understand all that is going on, viewers must have sufficient knowledge of all that has preceded the MCU. Without such knowledge, one could easily get lost in the fast pace of the stories and the numerous references made to other plot points and ideas. Despite this, I think that one can still appreciate the foundational message in the series: a calling which invites us to venture out into our own universe of possibilities and an urge to consider how one small decision can transform our entire future. In echoing the series’ watchful narrator, it’s an invitation to ponder the question, “What if…?”.