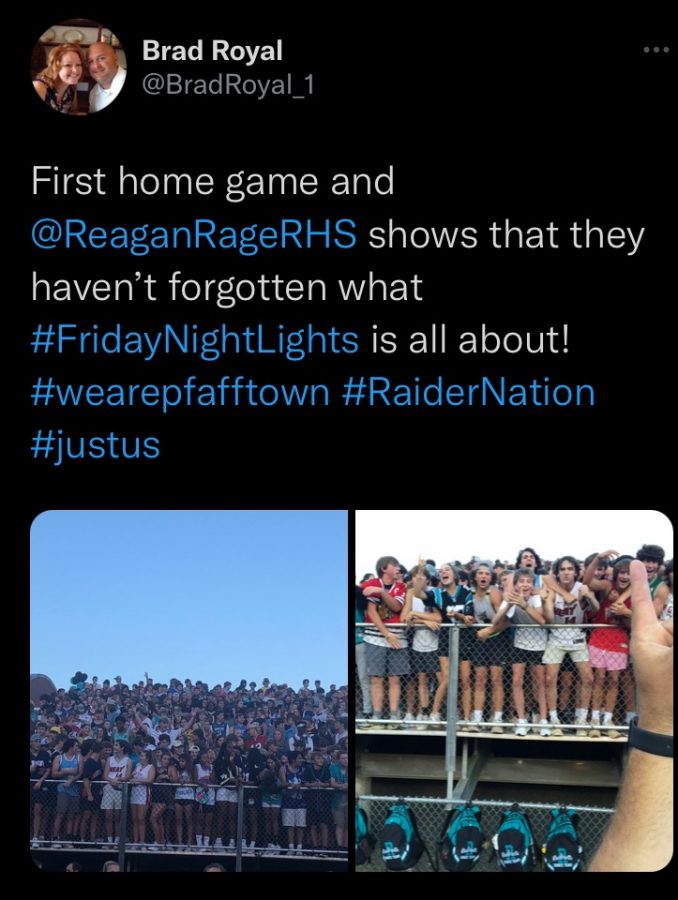 Last Friday, my alma mater, Reagan High, hosted their first home football game of the season against the defending NCHSAA 4A champs, Grimsley High. Both teams came into the Aug. 27 matchup after winning their first games comfortably by 22 and 56 points, respectively. Local news stations and high school football fanatics alike were calling this the “must-see game of the week” and it certainly did not disappoint. The Raiders and the Whirlies were going back and forth the entire 48 minutes — run after run, tackle after tackle — and to the delight of the fans.

The home fans had to leave campus dejected after a heartbreaking loss, while the visitors rode the buses back to Greensboro on top of the world. But these feelings would soon recede as the students went home to their homework, getting ready for another week of in-person classes.

Usually, it’s the unwelcome grad trying to infiltrate the student section or the drunk dad yelling at the refs that embarrass the crowd. But on Friday night, it was the crowd itself that was the embarrassment of Pfafftown.

Brad Royal, the principal of this “A+ School” posted a selfie of him and the fully packed, shoulder-to-shoulder, unmasked, unvaccinated student section on Twitter right before kickoff. Rightly so, the picture faced immediate backlash and Royal would delete it soon thereafter.

In my freshman year, Royal’s first year at the school as well, Reagan was awarded an “A+” grade based upon many different factors including but not limited to freshman end-of-year test scores, the previous year’s graduation rate and lack of disciplinary issues. None of my remaining three years ended with such a prestigious distinction, but that didn’t stop Royal from milking the merit dry. “I feel the need, the need to exceed” posters were hung up in every classroom as if the Teacher Supply store was holding a massive clearance on unnecessary motivational posters. And if being four years removed from such excellence isn’t enough to pull down those posters, I think last week’s less than exemplary actions should convince them otherwise.

But Cooper, you may ask. “Why are you so enamored with high school students having a good time when frat parties are taking place practically every night so close to Wake Forest’s campus?”

Maybe my response is a bit selfish as my unvaccinated sister goes to a school with mostly unvaccinated individuals in a county where the vaccination rate barely tops 50%. And maybe because I am dumbfounded that the head of an institution encourages contradicting COVID-19 practices throughout the course of a single day.

And it quite possibly may be because I am angered at a community that I live and grew up in just completely ignore the last 18 months.

Yes, I am aware that other schools around the county, the state and the U.S. hosted and will continue to host games where students and fans are packed into the aluminum bleachers like sardines. But I am mainly just focusing on the school five minutes up the road because of my connections — past and present — and the feeling of responsibility to bring this inane leadership to light.

The main differentiating factors between what is happening at Wake Forest and Reagan are in regards to two things: vaccines and administrative support.

While they may not be super vocal about it, Wake Forest administrators are not advocating for SigDigTrig to throw parties every night of the week. You aren’t seeing Susan Wente doing a keg stand in a backyard or blackout in a basement. (You actually aren’t seeing her anywhere on campus this week.) And even if she was, she would be doing it amongst a vaccinated population. Penny Rue said we have about 200 unvaccinated students on campus. I don’t even know if Reagan has 200 vaccinated students. Half the school is younger than 16, and of those who are eligible, you still have to account for the 51% county-wide vaccination rate as well as parental influence on their children’s medical decisions.

Brad Royal is encouraging his unvaccinated students to pack without masks into a single section of a 4,000 person stadium after a week of making kids wear their facial coverings indoors. The fact that many of these students haven’t had one month of in-person instruction over the course of two years and may not finish out the semester without having to go back online is disheartening. The fact that student and community health are not being prioritized is heartbreaking. And the fact that probably nothing will change, that the individuals will continue ignoring the absurdity of their own actions, is even worse.