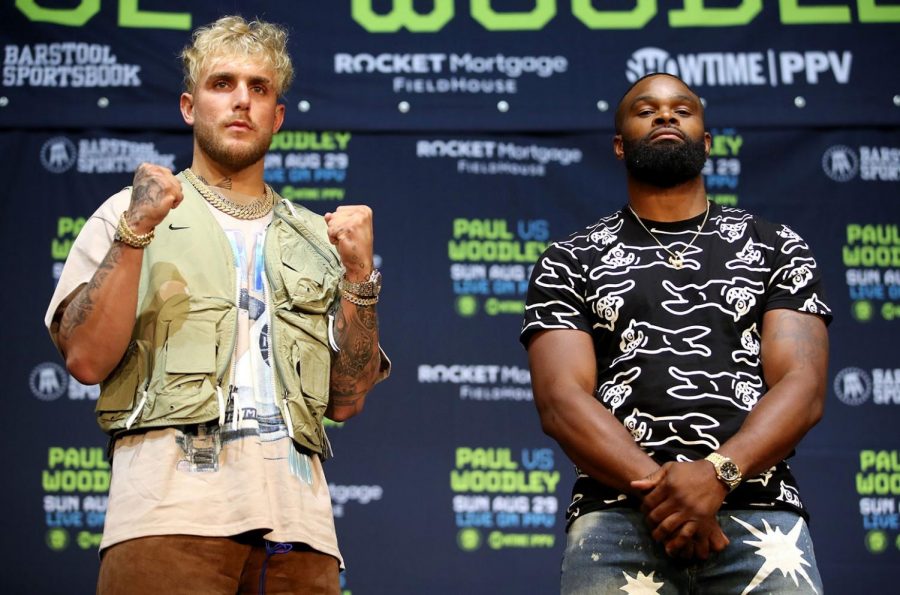 Jake Paul, following an unquestionably dominant win against Tyron Woodley, is no longer being taken lightly by fans and influencers alike.

Whether you love him or you hate him, it is becoming harder and harder to argue that Jake Paul is not a professional fighter. Paul, a controversial Youtube influencer, took to the ring on Sunday night in an attempt to take down Tyron Woodley, a trained, professional fighter.

On Aug. 29, Paul stepped into the ring, fully trained and prepared for a fight. This time, he was going up against his toughest opponent to date, Tyron Woodley. Woodley was previously a highly competitive MMA and UFC fighter. In contrast, Jake Paul has rather recently entered the gates into the world of fighting.

Paul’s story is one of grand unconventionality. He has always been in the public eye. Until recently, this public attention has only been granted for his chaotic antics on social media.

Most know Paul as a YouTuber. Paul has had his fair share of issues in the past. Most glaringly is a controversial video that he and his brother uploaded in early 2018 in which he showed a dead body on camera to their younger viewers.

After getting back on his feet, Paul found his way back into the public eye when he unofficially married influencer Tana Mongeau. This wedding also caused a large controversy in his life, as he was arrested for violating COVID-19 protocol in Southern California.

Following his release, Paul found a new passion in professional fighting. He began training endlessly, and many viewers across his social media platforms instantly thought it was a joke. As of late, many influencers and stars have begun fighting in order to gain more followers and traction to their accounts.

Paul has made it very clear that his fighting career is not only for giggles, but rather that fighting is something to which he’s deeply dedicated. This ideology slowly started to become clear to the public when Paul was featured on popular sites and television shows such as ESPN, SportsCenter and Bleacher Report.

After his first big victory earlier this year, reporter Stephen A. Smith tweeted out, “From now on, Paul needs to fight an actual boxer. He’s going to hurt any non-boxer.” In seeing these reports on SportsCenter and reading news from other reputable sources, it has become evident that Paul is no longer just an influencer, but a driving force in the boxing and fighting world.

This became even clearer this past Sunday. Woodley and Paul both weighed in earlier in the week, and after a quick photo opportunity, they exchanged some words and returned to complete their final training preparations ahead of the big fight.

With Paul being such a large influencer, he brings a large audience to these events. Thus, the pressure of winning becomes even more crucial to his status. He went through an intense couple of days of training to prepare for the event after weighing in, and when Sunday rolled around, both Woodley and Paul were ready to go after each other.

Paul and Woodley took to the ring and put forth strong swings, but Paul was the overwhelming alpha in the match. In the mess of sweat and blood, Paul eventually came out victorious in a split decision after eight rounds of fighting.

After the match, Woodley demanded a rematch, as he was upset with the results from the judges. Paul responded saying he “had his chance.” Paul also jokingly made an offer to Woodley following the match: if Woodley got a tattoo saying “I Love Jake Paul”, he would consider the rematch.

Paul’s fight against Woodley has now moved him to an undefeated 4-0 in professional wrestling. It is unclear who Paul’s next opponent will be, but one thing remains certain —with Paul’s undefeated record and his growing presence among viewers and sports reporters alike, he is a force to be reckoned with.

Paul’s career will continue to grow, and his experiences thus far have shown that it is time to take Paul seriously. If not now, then when will we realize the lengths that he is willing to go to in order to prove himself to the world of sports?