“The Green Knight” flees to the big screen

"The Green Knight" is a cinematic adaptation of the arthurian legend 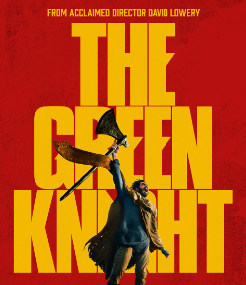 “The Green Knight,” after having its release postponed due to the global pandemic, came out in theaters on Aug. 30. From what we saw in trailers, it appeared as though director David Lowery intended to deliver an unusual, left-of-center film based on Arthurian legends, specifically Sir Gawain’s Christmas game against the Green Knight. With the release of the movie, it seems that Lowery delivered just that: a sprawling coming-of-age story that explores the Arthurian world of chivalry and notions of morality. From this point forward, it’s hard to discuss the film without delving into spoilers, so here is your customary spoiler warning.

The film opens with Gawain, King Arthur’s nephew, treading water in his day-to-day life and going out to drink and party at night. Clearly, he falls far short of the legendary members of the roundtable that surround him.

However, on Christmas, his mother, Morgan Le Fay, summons the Green Knight to challenge the Knights of the Roundtable to his Christmas game.

Boiled down, the game is essentially “an eye for an eye.” Whatever blow that Gaiwan strikes onto the Green Knight, the Knight will return to him in a year’s time.  Surprisingly, the Green Knight surrenders, which results in Gawain chopping his head off, only for the Green Knight to pick up his own head before riding off into the wild.

A crucial portion of this story involves Gaiwan’s journey to the Green Knight as he attempts to complete his game. Gaiwan undergoes various tests of honor and chivalry, virtues which he claims he would give his life for, but doesn’t seem truly willing to. He receives a green girdle, said to be enchanted with a spell that would protect him from any blow. The ultimate test comes when he finally encounters the Green Knight.

The ending of “The Green Knight” is a bifurcated one, exploring the outcomes of a crucial decision: to flee or to stay. If the Green Knight flees, Gawain clutches onto the girdle, protecting him from harm. He is able to save his life from the Green Knight but still must come to grips with what the Green Knight represents: the unstoppable march of time.

A recurrent idea present toward the end of the film is that, although we normally think of nature as a lush and rich environment, it is truly a cold and unforgiving force. The one certainty of life is that, no matter how much we build and accomplish, plants will overrun the houses we used to call home. In the end, everything will be washed over by this inevitable force. Gaiwan’s life slowly becomes a shallow attempt to hold back this erosion, yet it eventually overtakes him. He dies a friendless, loveless and reviled king.

At this point, the film jumps back to the Green Chapel when the Green Knight is about to slice off Gaiwan’s head,  but this time he instead chooses to remove the girdle, preparing for his death. The film ends with Gawain passing a test of chivalry, and it’s left up to individual interpretation as to whether the Green Knight decapitates Gawain, potentially confirming that this was all a test of character.

The film was masterfully crafted and one that I would wholeheartedly recommend watching as soon as possible.