There are mixed reviews among the student body towards Yamas 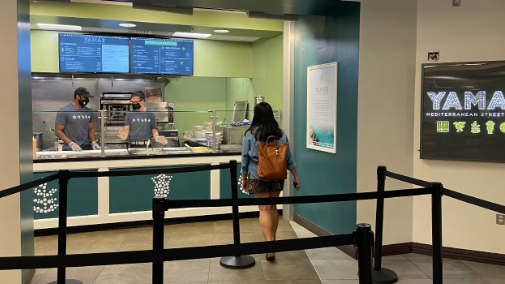 Yamas, the latest addition to the Benson food court, replaces Moe's and features a Mediterranean cuisine unavailable elsewhere on campus.

The introduction of Yamas to the array of Wake Forest University dining options has been met with much enthusiasm, and the line for the Mediterranean outlet is known to be especially long right around the times of 12 p.m. and 6 p.m. every day.

Yamas was brought to Benson University Center this year to replace the beloved Moe’s. Most find the newly added Mediterranean station to be healthier and more versatile than Moe’s, but the arrival of Yamas is a point of contention for others.

A number of students have expressed a level of relief at the new station, while others find the restaurant to be low-quality. A debate over the merits of Yamas certainly exists, but more seem to be in favor of the addition than opposed to it. Yamas has proven to be versatile and is loved by many, though maybe not to the extent that Chick-fil-A is.

Yamas has a series of buildable meal options that can be made instantly behind the counter and are ready to be eaten anywhere soon after. They offer a sandwich, in which various ingredients are piled into thick pita bread, or grain and salad bowls, where the ingredients are added on top of a choice of wheat grain, yellow rice, or salad.

The pita bread is thick and simple, with no extra flavorings or spices. The bread would be even better toasted, but is consistently decent. Their yellow rice is a classic lemon basmati rice that pairs well with any of their topping options and is a popular staple. The rice is popular and, according to Wake Forest sophomore Faith Hunt, “always sold out by the time I get there.”

“It kind of tastes like boxed rice with a little bit of extra flavoring. Honestly, I prefer the rice at Cava (a Meditteranean restaurant in Winston-Salem),” Hunt said.

According to sophomore Eric Degter, the Yamas chicken is the “best quality chicken on campus.” The falafel, however, did not receive the same response, at least according to Wake Forest student Mia Reede, who claimed that the fried chickpea balls are “often soggy.” The protein options, however, are very important in defining the overall experience and favorability. When chicken can be had at many of the other Wake Forest dining locations, having a quality alternative is always appreciated.

Following the base and the protein, the diner can pick from a range of toppings that resemble a miniature version of those available at the off-campus Yamas location, including feta, peppers, tomatoes, chickpeas and more. These options are combined and drizzled with one of the six sauce options that Yamas has, the lemon-lime tahini being a classic.

If the lines at Yamas are any indication of its success, Yamas is well-liked by Wake Forest students and is a popular lunch and dinner spot. The ease of the takeout options and the simplicity and versatility of the meals make it easy to grab these Mediterranean bites and go.

While some ingredients could be fresher or more flavorful, the combination of the choices allows for a tasty meal that is certainly refreshing after the legacy of Moe’s.