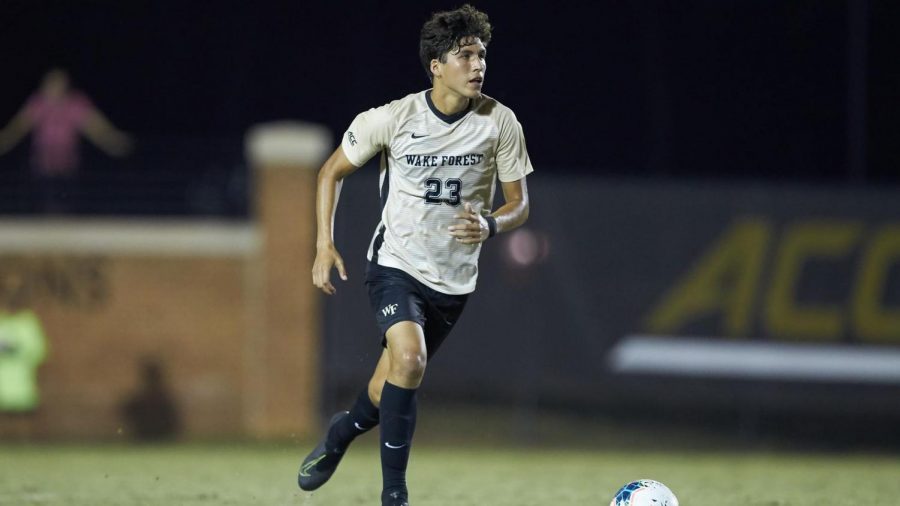 Benalcazar was one of two players to start all matches during the 2020-21 season.

Now a junior on the Wake Forest men’s soccer team, Nico Benalcazar has tallied numerous significant accomplishments, both prior to attending Wake Forest and during his time here in Winston-Salem. The Wilton, Conn. native received two All-ACC Second-Team Selections in 2020, a 2020-21 TopDrawerSoccer Best XI Second-Team Selection and was named ACC Defensive Player of the Week in November of 2020. He also represented the United States by playing on three youth national teams. Though his resumé is already quite impressive, Benalcazar always strives to accomplish more. The defensive player always keeps his family at the forefront of his mind, and he always works to make them proud.

Christina DeNovio: When did you first start playing soccer?

Nico Benalcazar: I started playing when I was three years old. I have two older siblings and they both played, so I was always at their games. That’s where I began playing. For the first seven years of my life, I was coached by my dad, so it was a family thing.

CD: At what age did you decide to take the sport seriously and when did you begin to see a future in it?

NB: Probably around 11 or 12 years old, just because around that time is when the U14 Academy started. So that was a new league in the U.S. that brought together all the best players in each town or city into a regional team. I wanted to be on one of those teams, so I just put forth all my effort into trying to make one of those teams.

CD: How did you choose your jersey number, 23?

NB: Coming to Wake, the team asked us what number we wanted to wear, but all of the ones I wanted were taken by the upperclassmen. I’ve always worn number five or number 13, but at the same time, Michael Jordan was one of my biggest idols growing up. Sharing a number with him, even if he’s in another sport, is really cool.

CD: Can you talk about your time playing for New York City FC Academy?

NB: I was there for about four or five years, and I was part of the inaugural Academy team. I was young, I was having fun. But to make the team you had to attend regional talent try-outs. I went to about eight out of the 12 they had. Not being invited to four of them, I started to wonder whether or not they liked me. But after they chose me to be a part of their first U-14 Academy team, I really took that with a grain of salt. I knew that the work wasn’t done, I had to still try to play well for them. A lot of friends I made there are now on professional teams around the world, which is pretty cool to see. I like to just look back on everything we accomplished, [including] back-to-back national championships, and then a generation Adidas cup that we also won. I thought the group that we built from the inaugural season in 2014-2015 really stuck together through it all. They’re all still some of my best friends. It was like an hour and a half back and forth to practice every day, so it was like a huge commitment and sacrifice in my life and my parents’ lives, of course — they had to drive. But that was something I’ve always wanted to do. I’ve always wanted to be a professional soccer player, and that gave me the best chance at doing so.

CD: How was your time playing for the national team?

NB: That was also pretty cool. I was part of the U-16, U-18 and U-20 teams. For the domestic camps, you need to perform well at your club — mine was NYCFC — and they have scouts all over the US. You need to play well there in order to be scouted to get invited to a camp. So, I would say the biggest thing I took away from each camp was just trying to learn as much as possible from that coach that we had at the time, and implementing that into our games, because at the end of the day, coaches like to see what they like. So if you’re doing what he likes, then you’ll probably have a higher chance of getting called in. I would say, not being called into several camps in my age group only motivated me to work harder. I think that’s why I’m here today, just because I never gave up. I guess I could have gotten complacent with what I had done at a young age, but your life is so much longer than that. You can’t sort of dwell on those things just because they’re good at the time — you need to keep working for more.

CD: What made you choose Wake Forest?

NB: At first, I just searched online for the top 10 soccer schools in the country. I had to go visit each one to see which ones would be the best fit. My top three were Duke, Georgetown and Wake. Both Duke and Georgetown are good and the coaches there are amazing. But when I got to Wake, it gave me a sense of being at home because of the small environment. I lived in a small town where there was only one high school for everyone, and there were only about 1,100 people there. I just felt at home, the coaches were super nice and welcoming. I knew it wasn’t going to be easy from the start, playing-wise, but I knew if I performed well, then I’d get my chance someday.

CD: What are your favorite parts of being on the team here at Wake Forest?

NB: Definitely the bond with all the players. We meet a new set of players every single semester just with players leaving and coming in. Also, the fans at the games. Playing in front of my classmates here is such a cool experience because we know all these people and we’ve shared so many experiences with them.

CD: Do you have a favorite game or memory that stands out to you since you first started playing here?

NB: My freshman year, the team made it to the Final Four. The Elite Eight matchup against the University of California, Santa Barbara was here at Wake. And there were like 6,000 people here watching. Everyone was a little nervous, obviously, because it’s a big game, but at the same time, we all enjoyed seeing so many people. People were crawling under the fences just to watch. We won, too, and everyone went crazy.

CD: Is there a person you think about when you’re playing or who you want to make proud?

NB: Yeah, my parents, all the time. I talk to my parents like three times a day, which I know is more than usual for college guys. But at the same time, they’re my best friends. I’d do anything for them, they’d do anything for me. That bond we’ve built since I was growing up is so important to me. Every time I go out, I always think about them, I always like to pray for them. I just want to thank them for everything they’ve given me. My siblings, too, of course. My parents sacrificed so much of their lives to make us happy, so anytime I play, I just try and play for them.

CD: Now that you’re a junior, do you fit the role of a leader to younger players?

NB: Yeah, I definitely try to as an older guy on the team. The sophomore class still has no experience with a real crowd or a real college environment. We all try to help them through everything and lead them in games, out of games, in class, out of class. I like to create relationships off the pitch, and off the field, with my teammates.

CD: What will be some of the team’s strengths this season?

NB: I think we have the exact same team as we did in the spring, and we went to the Elite Eight. You typically don’t get an entire team back two seasons in a row. It was a very, very young team, so the experience we all got from that, I think would only translate positively into this season. We lost our first game, but this team is super special. There’s a ton of different guys, and the depth we have in every position is pretty crazy. Everyone here is super talented, and we can all learn from each other, which is huge.

CD: What are your goals for the rest of your time here?

NB: You have a lot of responsibility. If they don’t score on you, you don’t lose. In any sport I watch, I just love watching the defense play. I only started playing defense like four or five years ago. I’ve always been sort of mesmerized by watching how all the defenders have their certain tricks and things that they do to not let their attackers beat them. I find being able to use different tactics against different players super cool. Also, leading the group from the back, you can see everything. Calling people out and telling them where the other team is, which spaces they need to cover and stuff like that.

CD: What career path you would like to pursue after soccer?

NB: I’m not really sure what I would want to do after soccer just because I’m very focused on that. I want to do something with sports. My major is Economics because I find it pretty fun. It’s always been a dream of mine to be a sporting director for a team, or maybe a coach. I can’t imagine myself being in an office, nine-to-five every day, just because I like to move around and be outside.

Editors Note: This interview has been edited and condensed for clarity and brevity.