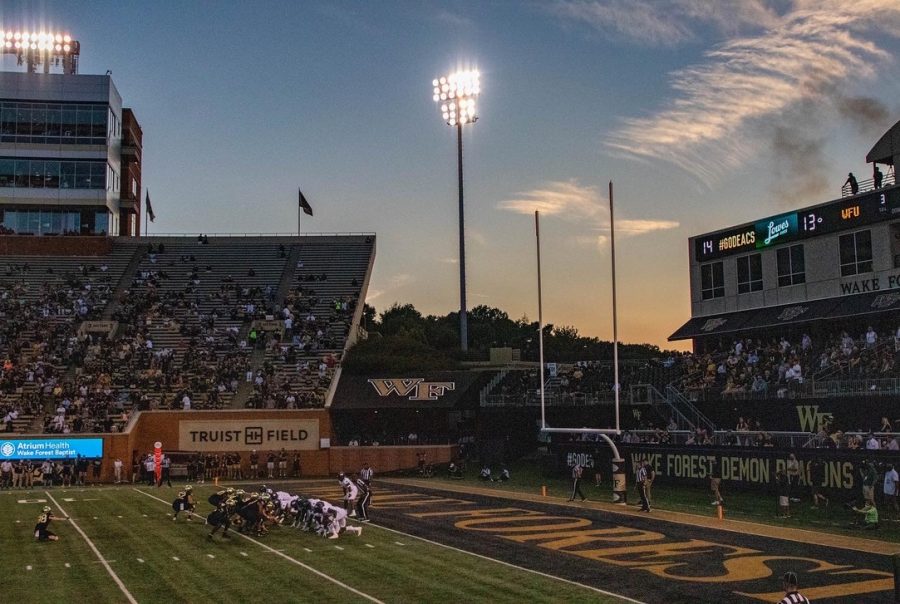 On a warm Friday evening, football returned to Winston-Salem in full. The lights shined bright, a full student section cheered loudly, and paratroopers descended into the stadium. Wake Forest relished in the beauty of this slight return to pre-COVID normalcy, defeating Old Dominion 42-10 in convincing fashion.

With the Demon Deacons winning the toss and deferring to the second half, it was the Monarch’s offense who took the field first. Under center was the predicted starter, D.J. Mack Jr., a transfer from UCF. In the preview for the game, it was predicted that Old Dominion would rely heavily on the run, and in the first drive, it became increasingly clear that that was the plan for Head Coach Ricky Rhane’s offense.

The Monarchs’ first two plays were runs that accumulated only five yards, forcing a passing situation on third down. Mack missed the throw to the right side, and in just three plays, the Wake Forest defense forced the Old Dominion offense off the field.

The Wake Forest offense did not do much better on their first drive, going three-and-out following a miscommunication on a third-down pass from redshirt sophomore quarterback Sam Hartman. During the drive, it did become abundantly clear that Wake Forest would be returning to the hurry-up offense and the unique quarterback-option play, both of which were seen last season.

It was on Wake Forest’s second drive when the tables began to turn. On the first play of the drive, a pass was fumbled by redshirt junior wide receiver Jaquarii Roberson, which immediately seemed to take the wind out of the offense’s sails. Following a four-yard run to bring up third down, redshirt junior running back Christian Beal-Smith took the drive into his own hands, popping to the left side of his blockers and powering 44 yards down the field for a touchdown.

Following another Old Dominion three-and-out, Wake Forest found themselves with a prime opportunity to score. Redshirt sophomore wide receiver A.T. Perry had two steps on cornerback Corey Chapman, but an underthrown ball from Hartman allowed for Chapman to regain the lost ground and force an incompletion.

Wake Forest proceeded to run on the next two downs, leaving two yards left to gain on fourth down. At the Old Dominion 42 yard line, Wake Forest head coach Dave Clawson made the risky call to go for the first down. The call went against the Demon Deacons, as freshman running back Justice Ellison was taken down from behind for a turnover-on-downs.

To add insult to injury, Old Dominion marched down the field off a 31-yard rush from Elijah Davis. From there, kicker Nick Rice knocked in a 38-yard field goal. Spectators could feel the concern in the air, as Old Dominion trailed by only four.

Fortunately for the Demon Deacons, that scoreline only lasted for one play. Senior defensive back and kick returner Ja’Sir Taylor returned the kickoff from the one-yard line all the way to the house; he traveled 99 yards to extend the Wake Forest lead.

After falling further behind, Old Dominion pressed the gas pedal in hopes of bringing the game back within their reach. After once again relying on the option run to the outside for the duration of the drive, Mack finally took a gamble, shooting a pass to the left side of the field. On the way, the ball was tipped, and redshirt senior cornerback Traveon Redd had just enough time to slip his fingers under the ball for a show-stopping interception.

In response, Wake Forest took to the ground game once again, giving running back Christian Turner, a redshirt sophomore transfer from Michigan, his first carry of the game. Following two modest three-yard rushes from Turner, Hartman took to the air, finding none other than Perry once again streaking down the sideline.

With Perry a few steps ahead of the defender, Hartman once again underthrew the ball, but this time around, Perry was able to use his six-foot five-inch frame to come back and secure the pass for a touchdown.

In the postgame interview, Perry expressed how nervous he was for this particular game, and who he went to for help.

“I was anxious,” he said. “I called [my mother] three times today … this morning, the afternoon, before the game. She just told me to focus on what I have to do … do my job and have fun.”

Later in the quarter, Hartman made up for his underthrown balls on what was his best series of the night. On a third down, he mishandled the snap, yet had the composure to seamlessly retrieve the ball and find Roberson for the first down. Later in the drive, in the red zone, Hartman threw the ball up for Roberson, who high-pointed the ball in the back of the end zone for another Wake Forest touchdown.

Despite the Demon Deacons being up 25 points at the half, Clawson decided that Hartman’s day was not done, giving him snaps in the third quarter as well. In his final quarter, Hartman led two scoring drives, the first ending with a Beal-Smith wildcat run. The second drive, highlighted by strong passes from Hartman, ended with a four-yard touchdown pass to freshman wide receiver Ke’Shawn Williams.

From that drive forward, Wake Forest allowed some of their reserves to take the field, including freshman quarterback Mitch Griffis, the second-string quarterback.

After the game, Clawson reflected on the return of a real crowd in Winston-Salem, with the gametime capacity listed at over 25,000.

“I want to thank our students,” he said. “That’s one of the best student crowds I’ve ever seen at Wake Forest. It was nice to sing the fight song with them [after the game].”

Next week, Wake Forest is set to face Norfolk State, an FCS team that Old Dominion beat in their most recent season.