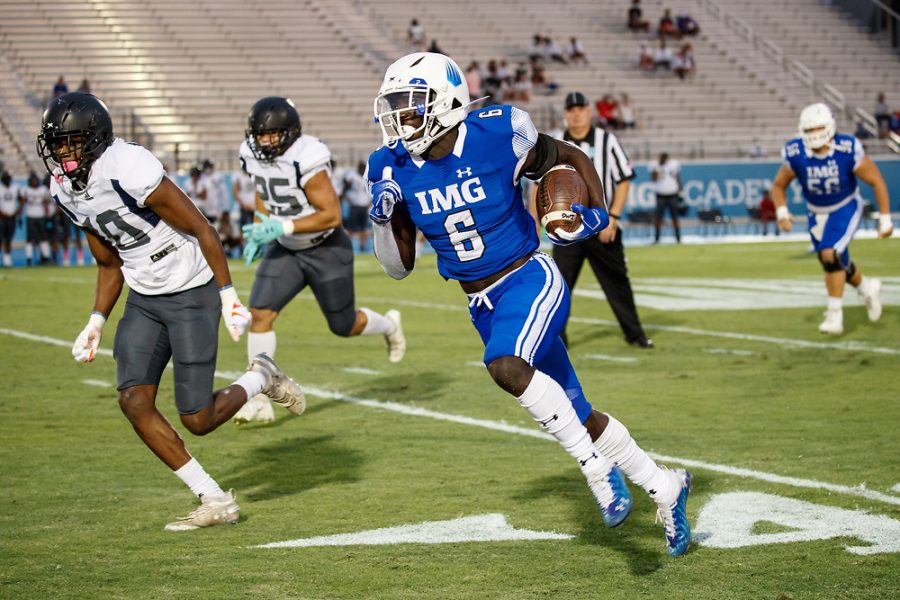 On Aug. 29, the IMG Academy Ascenders squared off against the Bishop Sycamore Centurions in the Geico High School Football Kickoff live on ESPN. The nationally televised event would showcase future college stars on the biggest stage. That was the plan, at least.

IMG, a breeding ground for blue-chip recruits, absolutely dominated Bishop Sycamore on their way to a 58-0 victory. Throughout the broadcast, the utter lack of competitiveness that Bishop Sycamore put forth left viewers and commentators dumbfounded and led many to question how and why this matchup was even arranged.

ESPN commentators began to call foul midway through the broadcast. They were told Bishop Sycamore had several Division I recruits on their roster, but nothing could be verified.

In the days since the now notorious beatdown, countless details have emerged exposing Bishop Sycamore, and the narrative that resulted has the makings of a perfect Hollywood script. The drama is inherent, the villains are dramatic, and the plot continues to thicken with each passing day.

To begin, it’s important to understand that Bishop Sycamore advertises itself as an online-only charter school — as a result, the school does not exist in a traditional brick-and-mortar sense. Based out of Columbus, Ohio, the school’s only listed address is a P.O. box. In fact, Bishop Sycamore is not even listed in the Ohio High School Athletic Association’s directory of schools.

Bishop Sycamore competes out of the Texas Christian Athletic League — mind you, this is a team from Ohio. What’s even crazier is that this “scam” has already been done before, and by the same supporting cast of characters! Bishop Sycamore’s head coach, Roy Johnson, started Christians of Faith Academy (COF) three years ago with a foundation and plans eerily similar to those of Bishop Sycamore.

COF was an online-only school devoted to helping at-risk youth. Yet, when the Ohio Department of Education visited Johnson’s “passion project,” they found no evidence of schooling or any students. This prompted state officials to revoke the school’s license and Johnson was investigated for fraud.

Undeterred by these events, Johnson recently teamed up with Andre Peterson, founder of Bishop Sycamore, to upstart the program in 2020.

Before Sunday’s matchup against IMG, Bishop Sycamore played a game against Sto-Rox on Friday. Two games within three days of one another is absurd by football standards and called player safety into question.

From the moment the broadcast began, ESPN tried to save face and explain the ridiculousness of the situation, mostly to no avail. In one claim, ESPN called out Paragon Marketing Group, blaming them for scheduling the matchup with such poor timing.

I can’t help but wonder how such a disastrous event could have come to fruition. In this day and age, with so much technology along with resources such as Hudl and MaxPreps at our fingertips, a quick background check of Bishop Sycamore could have mitigated the entire situation.

Last season, Bishop Sycamore posted an 0-6 record last and was outscored 227-42. To make matters even worse, the team is composed of postgraduates (several of which even have Junior College (JUCO) experience). That’s right, this “high school” football team has players well over the age of 20 competing against other high school powerhouses. And they’re still losing badly.

Throughout Sunday’s broadcast, the signs were clear that this was not your typical matchup. Bishop Sycamore lacked depth, only having approximately 32 players on their roster. These players wore mismatched helmets, and some even had to share. It doesn’t stop there though. Within the past few days, it has come to light that head coach Roy Johnson has an active arrest warrant.

To summarize: Bishop Sycamore has imposters who are older than high schoolers, they got manhandled and the head coach probably shouldn’t be a head coach given that he’s facing an arrest warrant for failing to appear in a domestic violence case (and multiple civil lawsuits for fraud).

On Tuesday, Peterson and Johnson agreed to part ways, with Johnson stepping down as head coach. Peterson continues to press on with the project and still hopes to salvage the season. Just this past week, Ohio’s governor, Mike DeWine, has ordered state investigators to probe the program, adding further insult to injury.

At some point, you have to feel sorry for Bishop Sycamore’s players — they were promised the opportunity to compete at a high level once again and fulfill their dreams of playing college ball. Instead, they were deceived and humiliated on a national stage. This story will continue to develop, but we can be sure there will be a 30-for-30 documentary made at some point.