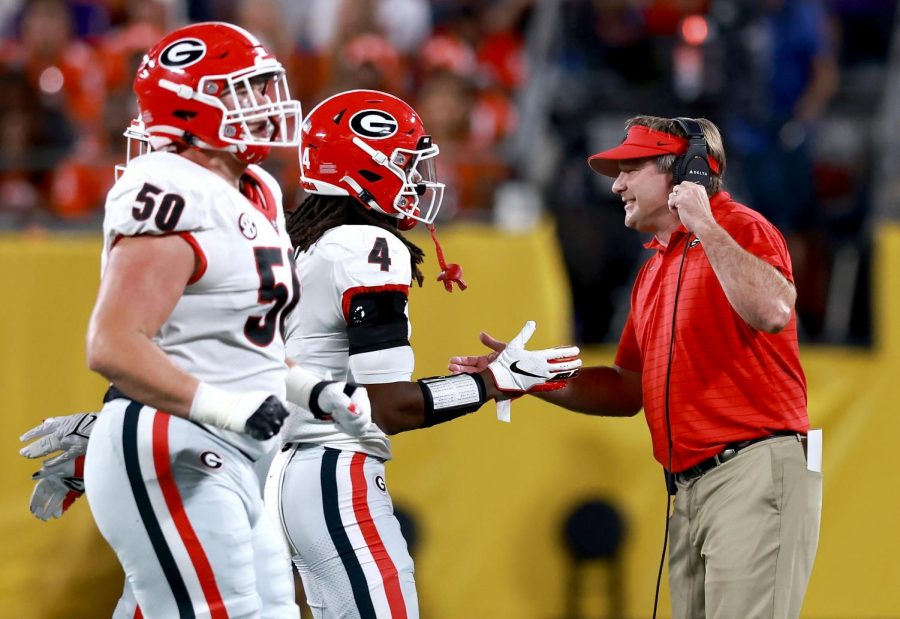 During Week 1 of the college football season, virtually nothing went as expected. Nail-biters, defensive battles, upsets and dominations all headlined the return to action.

No better way to start a title chase than with a top-5 showcase that lived up to all the expectations. five took a defensive shutdown for Georgia to take down the defending National Champions — Clemson averaged 43 points per game in the 2020 season — in their opening week matchup. With the two teams trading punts across the first two quarters — seven to be exact — and a Georgia missed field goal, fans were eager to see the first points of the game. They couldn’t predict what would come next.

Defensive back Christopher Smith intercepted Clemson quarterback D.J. Uiagalelei and ran it back 74 yards for what would be the only touchdown of the game. Georgia’s relentless front seven recorded seven sacks and kept the pressure on all day long. For Uiagalelei, it was too much to handle.

The Tigers finished with just two yards rushing and Uiagalelei finished with 178 yards passing, zero touchdowns and one interception. Clemson is now faced with a daunting task — they must play to near perfection. No team has ever made the playoff with two losses since the four-team playoff began in 2015.

The first big upset of the 2021 season: Virginia Tech took down North Carolina in a Blacksburg beauty.

The Hokies were positioned as a mid-tier ACC threat following a disappointing 2020 season in which they recorded just five wins. Conversely, the Tar Heels came into the opener with their highest preseason ranking since 1997.

North Carolina’s star quarterback Sam Howell threw three costly interceptions, and Braxton Burmeister did just enough to lead Virginia Tech to victory. The junior quarterback threw for a touchdown and ran for another as the Hokies marched off the field at halftime with a 14-0 lead. They wouldn’t look back.

The Tar Heels, after losing their top-two running backs (Javonte Williams and Michael Carter) and their top wide receiver threats (Dyami Brown and Dazz Newsome) to the 2021 NFL draft, proved that the ACC is truly up for grabs this season. They struggled to score all game long after averaging 41.7 points a season ago — good for ninth in all of FBS — and only looked competent once, on a late-game rally.

Down just one score with under a minute to go, Howell tossed his final interception. It was that dagger that truly put the Heels on their heels.

Alabama rolled to a dominant victory thanks to a historic performance from sophomore quarterback Bryce Young. In his first start donning the Crimson and White, Young threw for 344 yards, four touchdowns and no interceptions. The former No. 2 overall prospect in the 2020 class now holds the record for most touchdown passes by an Alabama quarterback in his debut, topping Joe Namath and Mac Jones, a rookie with the New England Patriots.

Up 27-3 just five minutes into the third quarter, the Tide and Young seemingly put the game away with a 94-yard strike — tied for the longest in program history — to Jameson Williams.

Miami quarterback D’Eriq King was flustered all day long — he was unable to lead his team past midfield until just before halftime. King finished with just one touchdown and two interceptions, throwing for a measly 179 yards.

Alabama — after putting up 510 yards in the win — appears in no way rattled from losing 21 players in the 2021 NFL Draft. The Crimson Tide head home to take on Mercer before battling Florida.

Formerly a player for UCF, Milton suffered a catastrophic leg injury in 2018 and saw game action for the first time in three years on Sunday night. The night was a special one, as Milton led a ferocious Florida State comeback that came just a field goal away from the biggest win of his life.

The game went into overtime, but the Fighting Irish came away with a much-needed victory.

The high-scoring affair featured seven lead changes before Notre Dame finally appeared to pull away. The Fighting Irish took a 38-20 lead to the fourth quarter, but then Florida State came storming back.

Fitzgerald and the Seminoles had an opportunity to put the game away and shock the Fighting Irish — he drilled a 50-yard attempt, but the play was nullified by a timeout called by his own coach, Mike Norvell.

On the second attempt, this time from 35 yards out, Fitzgerald came up short.

Notre Dame kicker Jonathan Doerer didn’t. He ended the game and gave the Fighting Irish the win when he nailed a 41-yard attempt on the ensuing drive.