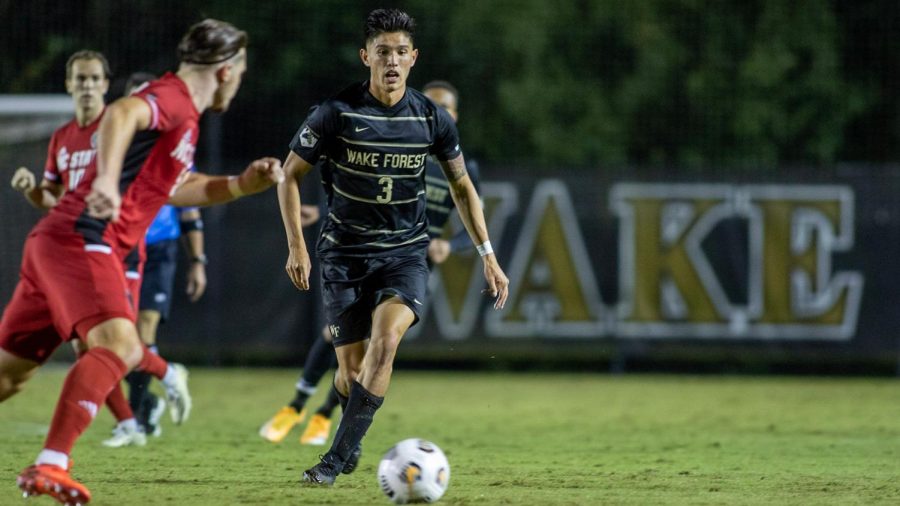 After 100 minutes of missed opportunities, rebuffed attacks and physical play, Kyle Holcomb leaped into the air and netted a sudden-death winner to propel the No. 18 Demon Deacons to victory over unranked Cornell.

Following a tough opening two matches (including an upset loss to VCU), the Wake Forest men’s soccer team had hoped for a return to the plentiful goalscoring of seasons past on Sep. 4th. Yet, the Cornell Big Red, playing for the first time since the coronavirus pandemic began, proved to be a unique test for Wake Forest. They disrupted a usually settled midfield and scored late in the game to force overtime.

Chase Oliver had a career match, scoring an early goal dishing out the assist that set up Holcomb’s winner. Yet, the Deacs’ scoring struggles kept Cornell in the game for far too long. That pattern’s a troubling one considering the Deacs are soon set to begin the ACC play.

The match opened brightly for the Deacs. Just 10 minutes into the game, Omar Hernandez found sophomore Chase Oliver in space on the right, and the wily winger shimmied past his defender before powering a low shot into the far corner. He turned back to the congregated Deacon fans and flipped in celebration of his first official collegiate goal.

From there, it was a story of frustration as relentless Cornell fouls and defensive pressure stymied Wake and prevented meaningful opportunities. Injuries also piled up for the Deacs, as defenders Nico Benalcazar and Holland Rula did not dress for the match. Midfielder Jake Swallen started the match but did not play after the half, watching from the sideline, while wearing a mask.

Following the halftime break, Cornell increased their attacking pressure, taking advantage of set piece opportunities that peppered netminder Cole McNally’s goal. The redshirt sophomore keeper made an acrobatic save to push a looping free kick wide, before another leap brought him crashing into the goalpost. McNally attempted to play on, but soon took a knee. That brought on freshman Trace Alphin on for his collegiate debut.

The tepid pace of the second half was followed by a high-paced and hectic final 10 minutes that began with a blistering Cornell counterattack. Cornell’s starting striker, Charles Touche, drifted wide and played a centering ball that Griffin Gerrard expertly allowed to run through his legs, setting up Emeka Eneli, who equalized the game on a shot that trickled just past the outstretched arms of Alphin.

Now filled with tension, Spry Stadium sat silent as Cornell celebrated in the corner. Fans wondered if the fragile lead of 70 minutes was now at risk of becoming a late deficit. Soon after, the complexion of the game rapidly changed again when Touche picked up a second yellow card on a lunging sliding tackle to drop the Big Red down to 10 men.

From then on, Wake Forest dominated possession as Cornell sat back and hoped for overtime, relying on long balls that sought to expose Wake Forest’s increasingly high line. Despite the one-man advantage, the Demon Deacons struggled to create shots on goal. On several occasions, sophomore Jahlane Forbes fired in crosses from the left side that fizzed past the Cornell goal without a goal-turning touch.

With under 30 seconds left, the match took another fateful turn. After winning the ball deep in his own half, Wake Forest defender Prince Amponsah turned and looked upfield. He found striker Roald Mitchell with a precise cross-field pass, and the Deacs looked set for a late opportunity until Cornell’s Henry Hylbert felled the freshman with a challenge that resulted in Cornell’s second red card of the match.

After a scoreless first overtime, the action resumed and quickly concluded with Holcomb’s winner.