Those who were on Wake Forest’s campus that fateful day share their stories, memories and frustrations 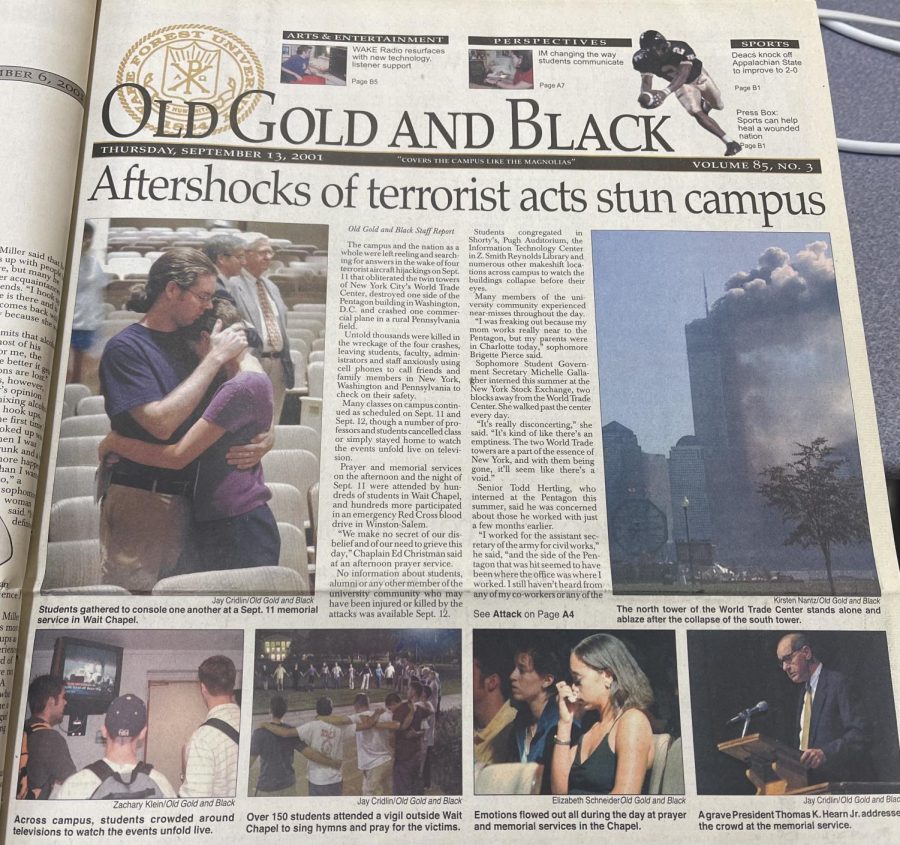 The Old Gold & Black’s September 13 issue featured extensive coverage of the attacks and aftermath on campus.

For those who had early morning classes at Wake Forest the morning of Sept. 11, 2001, professors and students who had maybe only met a few weeks prior became indelibly etched in each other’s memories.

In psychology, there is a concept known as a “flashbulb memory”. Flashbulb memories result in a very detailed recollection of the exact circumstances of a certain moment, such a moment when one learns of traumatic news. Many people who were alive and conscious of existence on Sept. 11, 2001, remember exactly where they were and who they were with. A very similar set of circumstances occurred on Nov. 22, 1963, the date President John F. Kennedy was shot and killed.

Saturday will mark 20 years since four planes fell from the sky and into American history. To mark this anniversary, the Old Gold & Black spoke with individuals who were on Wake Forest’s campus that fateful day and asked them to reflect on how college communities can come together in the face of difficult times.

One defining characteristic of the news coverage from Sept. 11, 2001 is that when the first plane struck, there was still reason to believe it might have been a tragic accident. After all, in 1945, a B-25 crashed into the Empire State Building and killed 14 people. It had happened before.

In Politics & International Affairs Professor Katy Harriger’s classroom, that was the question on everyone’s mind as news coverage of the first impact flashed across the television.

“Students started coming into class saying that a plane had flown into one of the World Trade Towers and asked if we could turn on the TV in the classroom,” Harriger said. “At that point, it was unclear as to whether it was an attack or a terrible accident.”

Then, at 9:03 a.m., just nine minutes after the first attack: “The second one struck and we knew it was an attack,” Harriger said. “We spent the rest of the class period watching the television coverage. Clearly, the lesson for the day was set aside.”

At almost that exact time, Class of 2003 alumna Darcy Escher remembers her phone ringing off the hook, which she ignored until she had to be up for her 10 a.m. health class. When she picked up the phone, her then-boyfriend implored her to turn on the television.

“So I turn on the TV right as the second plane was going into the South Tower, and it was just incredibly shocking,” Escher said.

A little bit later, Seth Hennes, who graduated in the Class of 2003, was sitting in an education class about world geography as his professor fiddled with the projector after finishing a video.

“For whatever reason, the news popped up while the cable feed input was selected and we saw the burning towers, the second plane had hit,” Hennes said. “And we all kind of sat there, shell shocked. Our professor canceled class, and we kind of stumbled back to our dorm.”

“I was teaching my First Year Seminar when someone in the Tribble hallway interrupted our class to tell us the U.S. was under attack,” Gillespie said. “We turned on the TV in our rooms and watched the second airplane fly into the towers. That experience of watching the plane crash in real-time bonded us as a class forever.”

Those classrooms were not alone. The Old Gold & Black reported in their Sept. 13, 2001 issue that “students congregated in Shorty’s, Pugh Auditorium … ZSR and numerous other makeshift locations across campus to watch the buildings collapse before their eyes.”

Then, the panic set in.

“We were all trying to contact people we knew were there,” Hennes said.

“When you’re a northerner at a southern college, you end up kind of knowing a lot of people from the Northeast,” Escher said. “So, you knew immediately that there were people whose families might be incredibly affected.”

“All of us were shocked and upset. Some of us had friends and family who worked near the towers,” Gillespie said.

Take Hennes, for example, who hailed from Orlando, FL, and had family in New York. His uncle worked across the street from the twin towers, but he luckily was able to get out in time. Hennes’ cousin worked as a police detective in North Shore on Long Island, so he was one of the first responders. Hennes says his cousin still suffers from Post-Traumatic Stress Disorder (PTSD).

“I was a 19-year-old,” Escher said. “I mean, you’re a pseudo-adult, you’re away from home, you’re not with your parents or your family members that are your source of comfort. Sure, you do have your friends, but they’re the same type of pseudo-adult that you are — it was just a lot to process as a young adult without very much structure from administration.”

Escher remembers that she missed most of her classes the rest of the week to catch up on news, but her ballet professor held it against her, and none of her professors seemed to understand.

There were services at Wait Chapel the afternoon and night of Sept. 11. At the night service, Thomas Hearn, Jr., then the president of Wake Forest addressed the community:

“It takes a catastrophe to overcome our reluctance to accept the lessons of human hate…,” Hearn said to students, as reported by the Old Gold & Black. “To your life, experience has added a bitter, yet inevitable lesson: there is evil and hatred in the human heart.”

Staff from the counseling center were on call to help students, according to Harriger. Escher says she does not remember counseling services being available, however.

“It was a tense time in the sense that everyone felt vulnerable and wondered if more attacks were coming and where they might be. Air travel was shut down completely, so the only way to get anywhere was to drive,” Harriger said. “Given our location so far from major urban areas and likely targets, I don’t think there was much fear that the university would be attacked.  It was more just considerable uncertainty about what came next.”

Some professors also took it upon themselves to comfort students, like English Professor Anne Boyle.

“​​I reached out to my students and advisees after noting their home states,” Boyle said. “Like me, many were having a difficult time processing what had happened and were watching the news unfold. Students with family or friends in the affected areas were trying to get in touch with loved ones. Some students were very subdued, while others needed to talk and cry.”

Boyle said she remembers her students handled the events in different ways.

In the long term, Harriger remembers how the attack resulted in a shift in priorities on campus.

“The following weekend was the President’s Leadership Conference sponsored by Student Government and the President’s Office,”  Harriger said. “I attended that along with several other colleagues from the Politics department.”

She continued: “Usually, these meetings were among student leaders, faculty, student life administrators and the President’s office and we would discuss campus issues. 9/11 totally changed the agenda, and instead, we focused on how, as an institution of higher learning, we might contribute to the discussion and help educate people about terrorism and its causes.”

In the Sept. 13 article, then-Chair of the Religion Department Charles Kimball issued a grave warning.

“It is extremely important that people understand that even if it turns out [the 9/11 attackers are from] an extremist group that claims a connection to Islam, the vast majority of Muslims are as horrified and offended as the rest of us,” Kimball told the Old Gold & Black in September 2001.

It did turn out that way, and history tells us that suspicion against Muslim Americans reached an all-time high in the aftermath of Sept. 11, 2001.

However, Hennes said that his Muslim friends never came under suspicion, that Wake Forest camaraderie won the day over bigotry.

Many people have many takeaways from that harrowing Tuesday in September 2001, but professors tried to impart a life lesson on their students. Harriger recalls reminding her students that events like this happen because people do not work out their differences — her class that morning was a First Year Seminar on democracy and deliberation, which she co-taught with now-retired Communications Professor Jill McMillan.

“It seemed like a teachable moment,” Harriger said. “But mostly we were not talking — we were glued to the news coverage.”