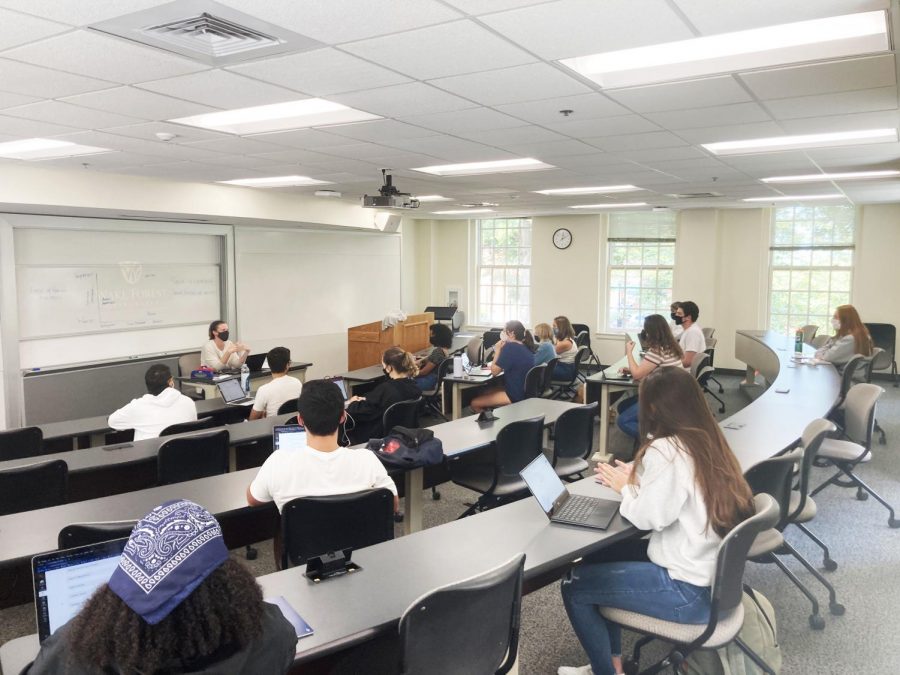 Attending class is a vital component of academic success.

Amidst a year of heightened racial tensions and political unrest, Wake Forest University recently provided another outlet for students to ponder thought-provoking questions and establish a community that enshrines the university’s motto, Pro Humanitate. After years of work, Wake Forest launched the African American Studies Program on Aug. 31.

“Faculty have long wanted an African American Studies Program, and it is rather remarkable that Wake Forest did not create one decades ago, frankly,” Dean of the College Michelle Gillespie told the Old Gold & Black. “The work of the President’s Commission helped drive this need forward. The college was fortunate in hiring Corey Walker into an endowed interdisciplinary professorship to lead this initiative last year . . . The program received unanimous approval for a 2021-22 academic year launch.”

As Dean Gillespie noted, Walker teaches Introduction to African American Studies. Before helping to lead the program, Walker was the chair of the Africana Studies Department at Brown University. Walker believes the program launch is very applicable given the circumstances surrounding the country today.

“In this climate of heightened tension in our society and global crises ranging from environmental catastrophes to political struggles for deep democracy to the pandemic, it’s vitally important to launch such a critical, intellectual project with the broad support and backing of the community and the University to change relationships between knowledge and power,” Walker said in a Wake Forest University press release. “We are excited to engage students in all aspects of African American Studies at Wake Forest.”

In January 2021, an anonymous individual donated $1 million to support the vision of the program.

In a video discussing the $1 million donation, Walker said: “It’s an opportunity to grow the community of African American Studies across the nation and the world.”

Students have the opportunity to major or minor in African American studies. According to a university press release, Wake Forest is planning a graduate certificate for the program, too.

The major, according to the undergraduate bulletin, provides courses in three particular areas: arts, aesthetics and expressive culture; and ethics, politics and society and history, culture and theory.

“African American Studies is an important academic discipline that studies the peoples, cultures and ideas of Africa and the African diaspora, and that’s what our new program is providing,” Gillespie said. “It is highly interdisciplinary in that it brings together the expertise of scholars in multiple disciplines to do this critical analysis. Our program will also pay close attention to the particularity of the history and culture shaping our institution’s place in the American South.”

The program also intends to collaborate with the School of Divinity to incorporate ideas from other individuals, such as renowned scholar, philosopher and activist Cornel West and Washington Post reporter Robert Samuels, according to a university press release.

In the news article released following the donation, Gillespie expressed that a liberal arts education could not be fulfilled without the addition of an African American Studies program.

“To accomplish our institutional mission of providing students with a holistic, relevant and critical liberal arts education, we cannot do that without African American Studies,” Gillespie stated in a Wake Forest University news article. “I am thrilled that our new program will facilitate the expansion of fields of inquiry that explore the formation and intersection of race, ethnicity, class, gender, and sexuality.”

Gillespie believes that many students will gain new perspectives on the world and explore new insights into making decisions after experiencing these courses.

According to the press release, students already believe in the transformative power of the new program.

“Last year, I took Dr. Walker’s Black Radical Traditions course and Dr. William Mosley’s Black Feminist Intimacies course, and that was my first time really engaging with the humanities,” senior Sierra DeVeaux said in the press release. “In class, Dr. Walker said African American Studies makes the audacious assumption that Black people are human, and that deserves emphasis because it dares students to think beyond the terms to which we’re accustomed in many classroom settings. Whereas a lot of our discussions about Blackness are usually grounded in ways that make Black people the object, African American Studies dares to make Black people the subject.”

Students will be able to learn more about the African American Studies major at the major/minor fair on Sept. 29 from 3-5 p.m.